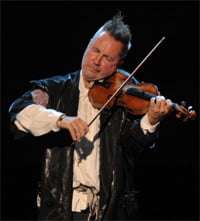 That the Royal Albert Hall was packed to the rafters, with queues at every door (causing a delayed start) for a one-hour-long, late-night concert is surely testament to the pull that Nigel Kennedy exerts. Last at the BBC Proms three years ago, by his own admission, this J. S. Bach recital was a challenge. Kennedy is passionate about Bach’s music and also has very personal views, as printed in the programme, about the reasons for the “demise in interpretation” of Bach’s unaccompanied pieces, something that for him began in the 1970s. Whether ‘authentic’ specialists – who get a large part of his criticism – can be blamed entirely is debateable but it is impossible to dispute Kennedy’s commitment to Bach.

As is now typical Kennedy, this Prom had the feeling of a rock concert, with much whooping and spontaneous audience applause. Putting presentation issues to one side, Kennedy is a superb musician who chooses his music thoughtfully, here tracing to the emotional climax of the ‘classical’ section of his performance. Starting the concert with what is usually one of his encores gave Kennedy the opportunity to warm his fingers. Perhaps he knows the piece too well, for this was not without issues as technique replaced musicality at the start. Just as an athlete stretches and limbers up before a big race, so Kennedy prepared himself, until by the end of this four-minute ‘Prelude’ he was ready, and in top form.

The first four movements of the D minor Partita are in the well-established Italian form that had existed long before Bach. The pairing of the slow ‘Allemande’ with a faster ‘Courante’ and then a spacious ‘Sarabande’ with a nifty ‘Gigue’ was a precursor to the symphonic form that was developed and extended by later composers. Where Bach differs in this Partita is in his placing of a monumental set of 64 variations over a chaconne theme as a finale. From Kennedy the ‘Allemande’ was sombre, stately and Germanic with the ‘Courante’ then tripping delicately over the dotted triple rhythms. The pathos-edged ‘Sarabande’ was full-bodied and committed. The sprightly 12/8 ‘Gigue’ showed Kennedy in his finest technical and musical form. In the ‘Chaconne’ his concentration was supreme; his apparent ease in bring out a single line from multiple-stopped passages hid the complexity of the task. Rapid passages of upward and downward scales that were earlier pure technique now took on a life of their own. The transition to the major key towards the end was sublime. After the last note was sounded there was nothing but unbroken silence as two solitary figures were picked out by the spotlights – Nigel Kennedy and the bust of Sir Henry Wood. This was a truly inspiring performance. 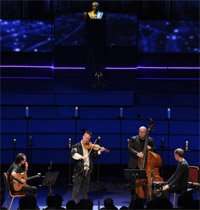 To round off the scheduled programme, Kennedy brought on some friends to join him in an improvisatory work (of Kennedy’s doing?) based upon Bach’s music. Kennedy firmly believes that Bach can “swing” and there have been many (Stéphane Grappelli and Jacques Loussier to name but two) who agree. Das Pendel starts with the Air (on a G string) from Bach’s D minor orchestral Suite played on violin with pizzicato double bass and was quite true to Bach’s original and acted as an introduction to a swung rendition of the first movement of the D minor Concerto for Two Violins, a rendition that would surely have been smiled upon by Bach the extemporiser. As the pace grew faster and faster, and with competition between Kennedy and Yaron Stavi becoming more intense, the musicians’ complete dedication to Bach’s music shone through and this particular pendulum was really swinging.

In 2007, in an interview with Sholto Byrnes for The Independent, Kennedy stated that after thirty years of playing classical music, at least fifty percent of his work in the future would be jazz. True to this, Kennedy and his mates, almost by way of an extended encore, turned to Fats Waller – the tunes of whom the 10-year-old violinist used to pick out on a piano. Opening with the 1934 song How can you face me?, the quartet picked up on Andy Razaf’s accusatory lyrics and added a spoken last verse of his: “Yeah! Don’t you talk back to me, shut up! Well alright, take you dog goin’ on the street! Yeah! Get out, just get up, keep goin’! Yeah!” (Not exactly Noël Coward!) There was a second encore, Waller’s Honeysuckle Rose and a third that was unannounced, a well-crafted improvisation over any jazzer’s basic primer – rhythm changes, here on George Gershwin’s hit ‘I got rhythm’ from the 1930 show Girl Crazy. With Kennedy concerts, there is a tendency to overrun, largely because audiences love him – for all that John Drummond (a former Proms Controller) tried to curb such things. Due to starting late, the concert didn’t finish until ‘round midnight (as Thelonious Monk had it) – a fitting time to start a gig, as any jazz musician would tell you.