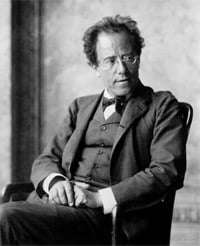 And so it was goodnight from them, and goodnight from him. The ‘them’ were the members of the Stuttgart Radio Symphony orchestra; the ‘him’ was Roger Norrington. This BBC Prom found Sir Roger bidding au revoir as he stepped down as Chief Conductor in Stuttgart after thirteen years. Mahler’s Ninth Symphony was the single work played.

Anyone familiar with Norrington’s conducting of Mahler – and specifically the Ninth (a Stuttgart performance is available on Hänssler Classic) – will have anticipated a swift, unsentimental and “pure tone” performance (“pure tone” being Norrington’s definition for eschewing vibrato). It was, as expected, all over in 73 minutes (it was 93 from Eschenbach in February), the string colours were subdued, sometimes effectively so in terms of purity, with wind and brass details vivid, occasionally to the strings’ detriment. Emotions were embedded into the musical structure, itself less of a through line. Something else was missing; maybe a companion symphony would have added greater ceremony to the occasion. The wit and light-heart of Haydn’s No.93 (the first of his ‘London’ Symphonies) would have been the perfect foil; and Norrington’s Stuttgart recordings of all twelve such works have similarly telegraphed his particular way with them. 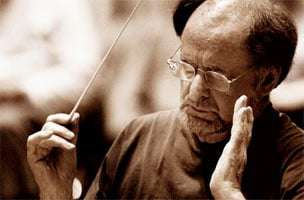 The Prom was though a symphony, singular Mahler in a singular interpretation, if a wildly fluctuating one. It’s surprising to read that Mahler 9 only reached the Proms in 1966 (courtesy of Jascha Horenstein and the LSO), and that Norrington’s was but the fourteenth of it. Of the intervening twelve accounts (roughly one every four years) two each have been conducted by Pierre Boulez and Bernard Haitink. One particularly intriguing rendition was under Bruno Maderna (in 1973), not least in his handling of the slow finale, in which he seemed to place a giant rallentando across the whole, and like Norrington his observation was the very antithesis of wallowing, save that Norrington sometimes seemed in a hurry, classical and dignified in one sense, but rushing, only finding some sort of calm acceptance in the diminution of the closing bars. But the strings at various points sounded squeezed, emaciated, and harmonium-like. We did get some portamento though. The preceding ‘Rondo-Burleske’ was playful rather than sardonic; maybe the Albert Hall blunted its edge, for there is more bite on the recording, although the acoustic added radiance to the blissful middle section. Before that, the Ländler second movement was light on its feet, jolly, but there was not enough contrast between sections, and not enough disruption. Norrington visually messed with the humour of the final bars, but the pungent-sounding, reptilian contrabassoon was a striking feature throughout.

The first movement, arguably Mahler’s greatest achievement, was sighed into existence, flickers of life evident, and soon to become volatile and impulsive – too much so – yet there was a ring of truth to it. It was certainly vivid if skin-deep in terms of emotions, and there was one gnawing change of gears in terms that spurted into a new tempo, which sounded no more than impatience. Beyond the bright projection and the unpredictable approach – Norrington giving large, unambiguous gestures – it was curious to hear this great symphonic movement made neither entirely cohesive nor deeply affecting enough. There was some sensitive solo playing, though, and clearly Norrington and the Stuttgart musicians have developed a productive rapport; and no-one should doubt Norrington’s seriousness of purpose or that his view is an instructive one. He sat to conduct and looked rather regal in doing so, and his parked position seemed apt to this collegiate performance, in which antiphonal violins were made de rigueur, the double basses were an impressive line arrayed at the back of the platform, and flutes, clarinets and horns made distinctive sounds.

Encores are rare after most Mahler symphonies, especially the Ninth, save on this night Norrington wanted to play Elgar’s Elegy for Strings (Opus 58), so he did. It’s from 1909, the same year as the Mahler (who conducted Enigma Variations in New York in 1910), its finale also an elegy if maybe not on this occasion (and, of course, it’s only with hindsight that we judge Mahler 9 to be valedictory – he had other ideas), but another dose of “pure tone” did seem to paint Elgar in too similar a manner. In any case, the few seconds before it started were intruded upon by the ring of a mobile and once again during its course (as Mahler’s finale had been). No doubt the miscreant is now doing penance and his or her phone is a pile of crushed-underfoot dust. No such curse on Sir Roger and his musicians, of course, for their Maher, however one receives it, is certainly thought-provoking and adds another layer of awareness to ‘Mahler interpretation’. He now goes to the Zurich Chamber Orchestra and they welcome Stéphane Denève. Bon voyage all round.