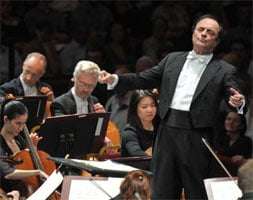 An American orchestra, a Swiss conductor … what better piece to start with than Sibelius’s Finlandia, more of a national anthem for the country than the official one. Still it gave those of us still smarting (twice) from the ear-bashing that the Pittsburgh Symphony’s brass section dished out earlier in the week to find out what the Philadelphians are like in this department … and the answer is warm, rounded, golden even, and integrated as far as trumpets and trombones are concerned; these musicians don’t swamp their colleagues (and are not encouraged to), although the Philly’s horns were a bit too immediate throughout the evening and Charles Dutoit did seem to favour them. Nevertheless, whatever its current financial situation, the Philadelphia Orchestra still sounds “Fabulous” as it was branded during Eugene Ormandy’s forty-plus years as music director (1936-1980). Dutoit is not Director but Artistic Advisor and Chief Conductor (Yannick Nézet-Séguin is waiting in the wings to be an Ormandy successor, following Muti, Sawallisch and Eschenbach). 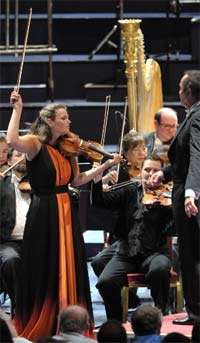 Finlandia received an exciting and touching performance. Then Janine Jansen tantalised in Tchaikovsky’s Violin Concerto, teasing the ears with restrained dynamics, inveigling the heart with seductive phrasing and exciting the senses with her volatility; quite intoxicating as Tchaikovsky’s Classical lineage met his Romantic side. Jansen offered a thoughtfully explored first-movement cadenza, the ‘Canzonetta’ was a moonlit serenade (not a million miles away from Glenn Miller) and the finale (uncut) was fiery and reflective. Throughout, Dutoit and the Philadelphians were attentive and characterful accompanists, woodwinds a constant joy. As an encore, Jansen followed Anne-Sophie Mutter (two nights earlier) by playing the ‘Sarabande’ from J. S. Bach’s D minor Partita (BWV1004), richly expressed and suggestive of time immemorial. 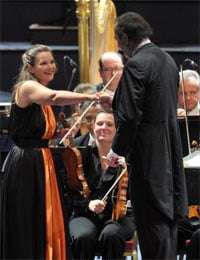 Rachmaninov wrote his swansong work for the Philadelphia Orchestra in 1940. Eugene Ormandy conducted and he and his Philadelphians made a great recording of it in 1960 – one that has rightness successively through it. Dutoit did it proud, too, running one movement to another (which makes musical sense and avoids intrusive applause) a continuity that underlined that this is effectively Rachmaninov’s Fourth Symphony. Dutoit nailed exactly the Non allegro marking for the first movement, trenchant rather than driven, so that when the saxophone-led wistful middle section arrived a through-line could be sustained; sultry sax-playing and tender opulent strings, too. Dutoit refused to rush at any point, rewardingly so, the second-movement waltz poised, bittersweet and lingering (haunted ballroom type of thing) and turning on a sixpence to the fluid coda that had no need to do the 100-metres dash. The extensive finale was built with organic power to Orthodox frenzy – both defiant and accepting – the nostalgic central section well-sustained and made meaningful – to complete an outstandingly perceptive performance, played from the inside.

La valse (1920) seemed a potential cancelling-out of the Rachmaninov – both works reach cataclysm (Ravel’s Valses nobles et sentimentales before Symphonic Dances would have been very effective), but Dutoit, and old hand with this music, ensured a flourishing performance, refined and eerie at the opening, double basses slithering, ‘the waltz’ itself becoming more fractious as it journeyed to its World War One destruction, an era shattered, things would not be the same again. This wasn’t the most-seismic La valse, but it was assured and full of personality, Dutoit as physically vigorous here as he had been in Finlandia.

We were not done. Dutoit came back with a bouquet of flowers and walked into the Second Violin section, found Louis Lanza, handed him the flora and embraced him. Mr Lanza was retiring after close-on 50 years’ service (so, a personal link to a couple of decades of Ormandy’s tenure). Then Dutoit paid another tribute – to London audiences’ appreciation of Berlioz’s music thanks to “the great conductor Colin Davis who has done so much for the cause of Berlioz. We will play in his honour the ‘Hungarian March’ from The Damnation of Faust.” They did too, and this Audience Choice piece (at least when the Budapest Festival Orchestra is in town) was brought off with style and panache.