The Parisian organist Thierry Escaich is the titulaire at St-Etienne-du-Mont, the only church in Paris, apparently, with a screen between nave and choir (a magnificent and bizarre Renaissance creation flanked either side by spiral stone staircases). Marcel Dupré presided there for 57 years (from 1929 to 1986), so Escaich could hardly be following in grander footsteps. 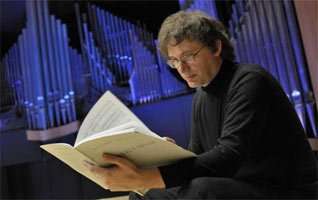 The French organ school, especially of the last century, raised improvisation to a great art, and the tradition is still flourishing with Escaich. Experience had indicated that organ improvisation, particularly in a concert, is work-in-progress, so often the triumph of style over content with a tendency to delight for rather a long time, a wow-factor technical display exploiting equally awesome instrumental facilities, but Escaich went some way to demonstrating why it might be the time to revisit that opinion. Overture in the Baroque Style was an impressive piece of pastiche, leaking into something much wilder, with echoes of Bach’s D minor Toccata (and Fugue). Escaich sometimes got stuck in a groove of particular figurations and great rolling sequences whizzing up and down the manuals, but it was a sizzling curtain-raiser nonetheless.

It sounded more ‘composed’ than his committed-to-paper Evocation III, which lingered lovingly over dramatic contrasts and almost palpable textures. Escaich’s powers of “composing in real time” were much more satisfyingly tested in his concluding Liszt improvisation (based on themes from Piano Concerto No.2 and St Francis walking on the Water, submitted 45 minutes before the recital), a thrilling burst of virtuosity that hurtled towards an unspecified crisis. I still have doubts about this elevation of improvisation to an art-form, but in the end, I suppose, all music is ephemeral.

Inserted into this organist-as-composer showcase was a discreetly played, meditative J. S. Bach chorale prelude, a brilliant one by Max Reger (amazingly the first organ work of his to be played at the Proms), and a lovely short Liszt Adagio based on a melody composed by the sister of Tsar Nicholas I. The inclusion of César Franck’s Chorale No.2, a great work magnificently played with some bold registrations, was a reminder that organ recitals, like any recital, are much more satisfying built round a few big works rather than a lot of short ones.

Christopher Cook’s avuncular mid-recital conversation at the console with Escaich added nothing to our appreciation of the organist or his programme, and I can’t imagine it furthered the cause of accessibility.