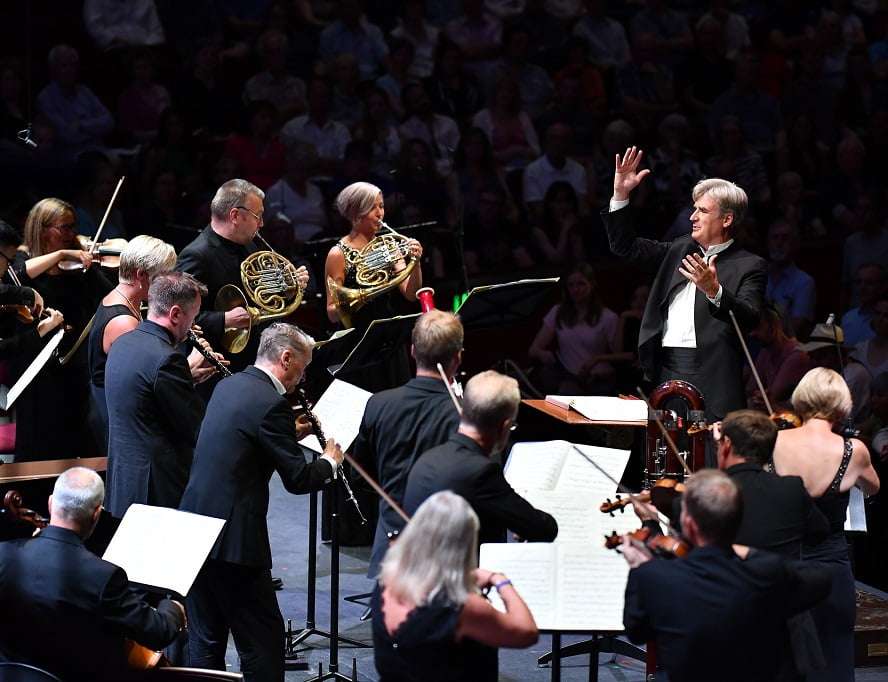 By the end of the evening Prom – twelve pieces and seven hours after the start of the afternoon one – there were numerous solo performers taking a collective bow across the front of the Royal Albert Hall’s stage, joined by six composers (two of whom had also performed). It was a mighty and invigorating moment to cap a long but often enjoyable melding of eighteenth- and twenty-first century music – composers each commissioned to write a companion piece to one of J. S. Bach’s Brandenburg Concertos – written three centuries ago (around 1720, it is generally supposed). The Brandenburg Project was led by the Swedish Chamber Orchestra and Thomas Dausgaard, four years in the making. 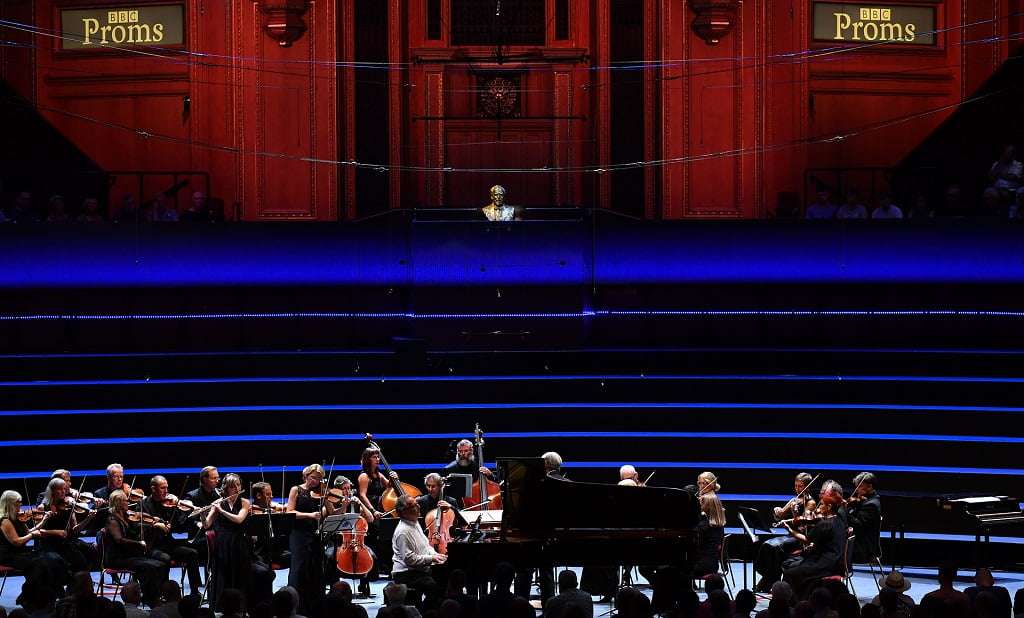 The array of oboists, horn-players and bassoonist (Mikael Lindström, inexplicably missed out in the biographies in the programme) almost outweighed the accompanying string ensemble, as well as violinist Antje Weithaas. It set the scene for pleasantly respectful, modern-style Bach – little vibrato but no real period panache and punch – Dausgaard (as in all the Bach) baton-less, using his cupped hands to scoop entries in. The ensemble (save lower strings and keyboard) all stood.

In the performances of the string-only Concertos – the Third, and the Sixth, the latter with Tabea Zimmermann and Brett Dean – Dausgaard seemed superfluous, often with his hands clasped at his midriff as his players needed no guidance. They fared best in taking us back to Bach, and offered a reminder how extraordinary a set the Brandenburgs are: no two are for the same instrumental line-up nor conforming to a single plan, the Third of just two movements (although here a slow one was provided by Anders Hillborg). In the Fourth Concerto Pekka Kuusisto was joined by recorder-players, while the Fifth featured Mahan Esfahani for the flamboyant harpsichord writing. 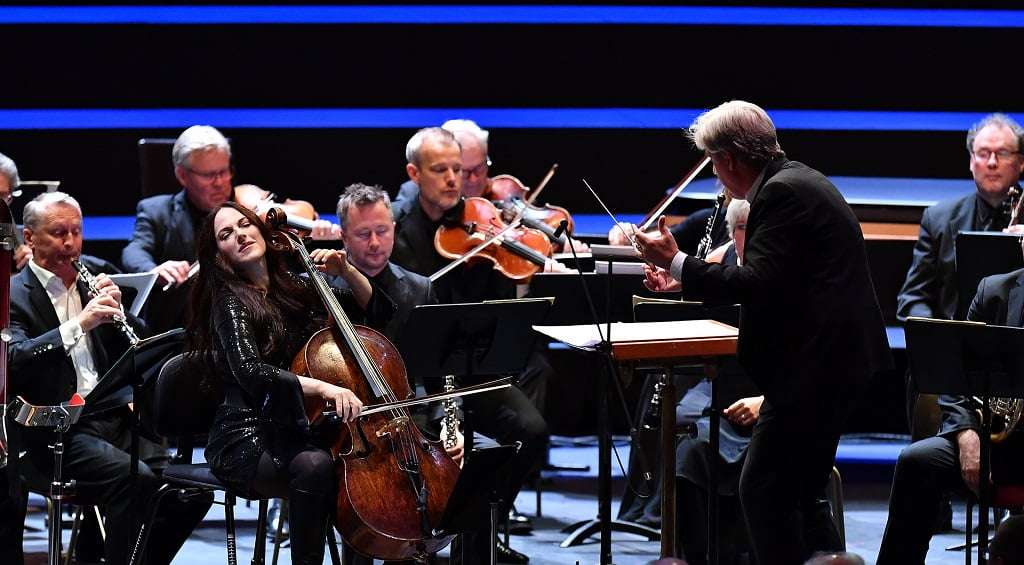 As for the commissions, ostensibly writing for the same forces as their Bach counterparts, the idea was busted from the outset, as the first completed work (to partner the First Concerto) was Mark-Anthony Turnage’s Maya – subsuming all of Bach’s soloists back into the ensemble, opting to write for the cellist Maya Beiser, who gives the piece its title as well as being its dedicatee. This is Turnage’s most late-romantic piece to date, another of his heartfelt elegies: a lament entirely suited to Beiser’s dark-hued instrument, first accompanied by four cellos, later the winds taking over without soloist. There’s a central, emotional climax before a return to the opening, this time swathed in triplets.

Anders Hillborg’s double contribution included another slice of late-romanticism to lead between the two extant movements of Brandenburg 3 – a rapt modulation led by Kuusisto’s almost Pärtian high violin line, slowly descending. For his own Bach Materia – with an enlargement of strings (some threefold) from Bach’s ensemble of nine – Hillborg takes snatches of BC3 and produces a highly enjoyable twenty-one-minute piece that starts with tuning that becomes a general string hubbub, eventually quieting and settling into what seems like a rising motif that slows (as if straight out of Vaughan Williams’s The Lark Ascending). Out of the high-pitched background, Kuusisto plays rapid arpeggios across the strings, punctuated by sliding whoops. Other breaks in the stasis included faster scurrying from the ensemble that eventually coalesces into a Bach excerpt that slips effortlessly into a jazz like section. There is a large amount of improvisation and an extended conversation between Sébastien Dubé (another omission from biographies) and Kuusisto. A further surge of Bach suddenly slows to a serene, gentle slow descent, and a veritable twitter of birdsong returns to Kuusisto vocalising, before the speed picks up again for the final propulsive movement, slowing just at the end for Kuusisto to accompany himself whistling. 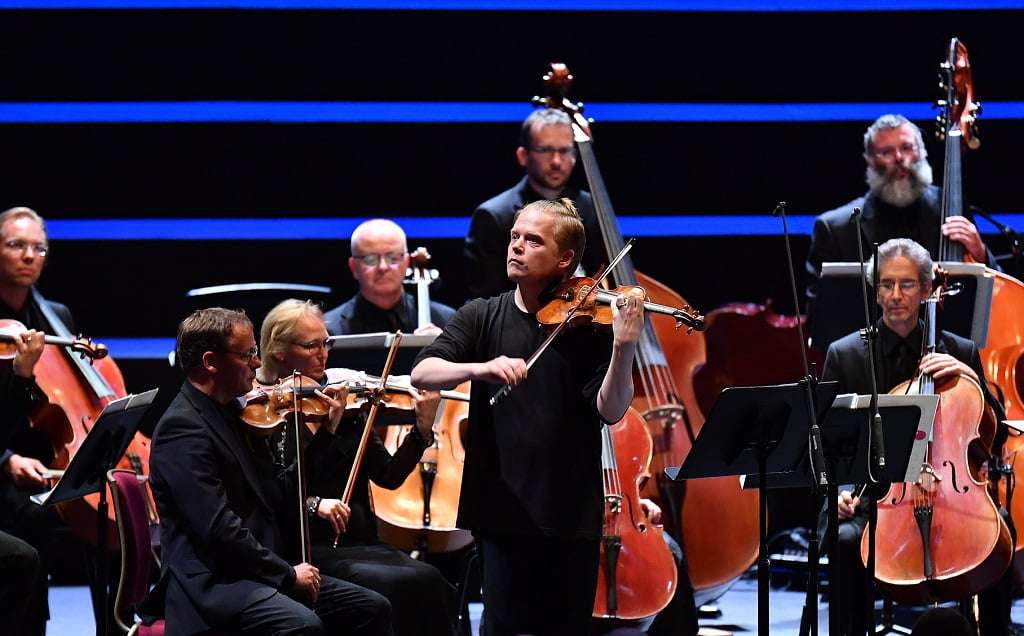 After Esfahani’s move to the limelight, the harpsichord was replaced by its big-brother, a Steinway grand for Uri Caine, composer of Hamsa (the Arabic word for five). There was a law of diminishing returns here – in that Caine’s was by far the longest of the new works, at thirty-one minutes, heard at the end of the already long first concert. It was also the most repetitive: Caine’s pianistic splashes in the first movement regurgitated in the last. Aping Bach’s three-movement structure, with an extended cadenza, there were many more stylistic references here, with some nice dovetailing of flute and violin, pirouetting away from the ensemble interruptions. The quieter, slower and reflective slow movement opened and closed with some of the orchestra whirling yellow plastic tubing above their heads (and Caine too), producing an eerie noise, pointing to the more experimental techniques employed here – including the flute sounding two notes simultaneously and Caine bending into the piano for a more direct interaction with the instrument’s strings. I suspect this is the piece that has the best chance of existence away from its Bach partner; here – unfortunately – its charms were partially neutralised by audience fatigue. 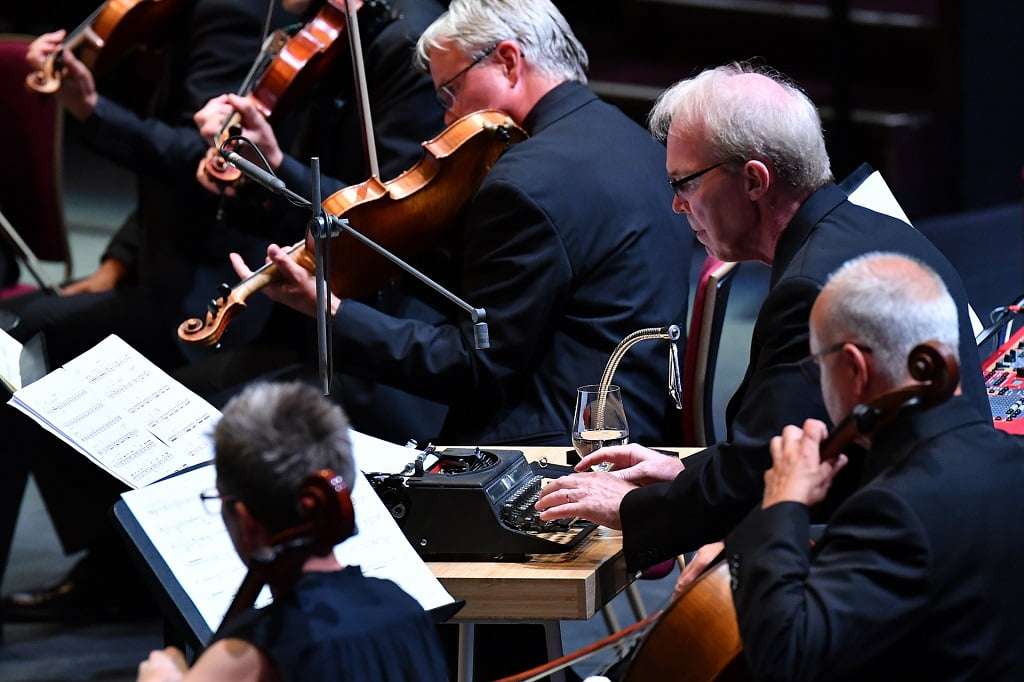 Somewhat refreshed for the second concert, the first new piece was Olga Neuwirth’s Aello, paired with Brandenburg 4, Bach’s recorders replaced by Claire Chase’s flute, the harpsichord by a synthesiser, which imitated the harpsichord and a glass harmonica. The other interloper is a manual typewriter, Neuwirth’s argument being that the opening of Bach 4 is rather mechanical. Utilising a number of modern techniques available to flautists, Chase urges her colleagues on with a breathy swoosh, repeated often. Later she clatters the instrument’s keys, matching the clattering of the typewriter and its ‘return-carriage’ ping (there was a nice touch at the end when the paper from the typewriter was handed to the front-row of the Arena).

The final two new works are more intimately bound to their Bach originals, as both are to be played continuously, with no break. Composing for his own instrument, Brett Dean prefaces Bach BC6 with a pair of more-disputatious violas, Tabea Zimmermann’s angry opening outburst countered by Dean’s calmer reply. From Bach’s counterpoint Dean follows his own counterpoint, especially after a central section of utmost stillness and intimacy. Ultimately the contrapuntal elements coalesce to melt effortlessly into the Bach.

Steven Mackey opted to follow the bright, piccolo trumpet-led Second Concerto in F (not played in Felix Mottl’s re-orchestration as claimed by the Proms website, a version that adds multiple instruments including horns and clarinets). Again the transmission was seamless into Triceros, composed especially for Håkan Hardenberger, a work so-called (Triceros means three-horned) because Hardenberger adds a flugelhorn and ordinary trumpet to Bach’s high instrument, Like Dean, Mackey opts for a contrast with Bach, so the bright, celebratory piccolo trumpet in the Second Concerto becomes a loner in Triceros, the more mournful flugelhorn quickly establishing the new mood as it takes its cue from the sombre cor anglais and the ensemble’s uneasy whirring and ticking at the start. From the stratospherically high Bach part, Hardenberger positively relished the change of mood and lower pitch. There’s an occasional nod to minimalism as the music progresses and the music searches for a happier – jazzier – mood when Hardenberger swaps to trumpet, though it doesn’t last long, supplanted by a quirky transition to more slow ruminations. Weithaas pulls the music out of despond and Hardenberger follows suit, eventually returning for a climactic snatch of Bach’s ending.

The Swedish Chamber Orchestra is recording The Brandenburg Project, and the new works will repay repeated listening. All are worthy of interest and, three-hundred years on, Bach continues to amaze and inspire.