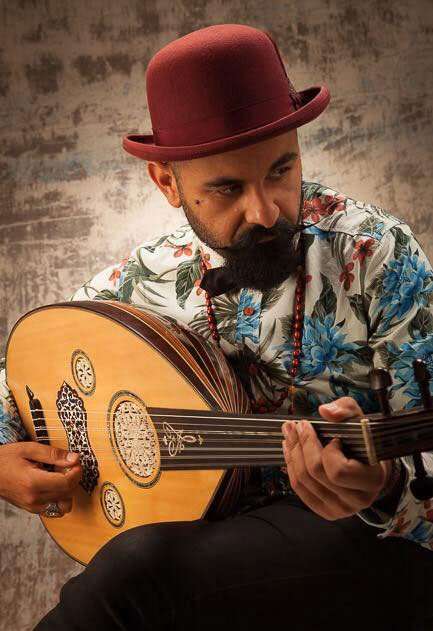 Joseph Tawadros’s encore summed up as well as anything the multitude of influences which sometimes blend, often collide, in his music. Entitled Bluegrass Nikriz, it was written after a collaboration with the banjo-player Béla Fleck; marries the blues scale with an Arabic mode; and sounds rather like Deliverance has been relocated to the souk.

He was playing an ancient Middle Eastern instrument (similar to the lute) in a relatively modern western concert hall; he himself is an Egyptian Copt long resident in Australia, and two of his pieces (Work and Clothes) are based on poetry by the Lebanese-turned-American Khalil Gibran.

Tawadros, who composed nearly all this programme, exploited these combinations and potential contradictions not only in his considerable patter between pieces (veering into stand-up territory) but also in the music itself. Constellation, for example, draws on slide guitar, banjo and mandolin styles as well as Japanese music, with a result that is impossible to pigeonhole. Similarly, Give or Take was originally written as a duet with the decidedly European double bass.

Other compositions are more instantly recognisable as belonging to a non-European tradition. The elaborate Clothes employs quartertones prominently; the improvisatory Tawasim Kord (a fine piece to open the concert, given its sense of tension and movement) also uses an Arabic scale; the inventive Forbidden fruit, with its extreme tone colours, takes the Middle Eastern flavour into new territory. But then there is some of that same atmosphere in Gare de l’est, as well, yet it is a work explicitly inspired by a Parisian railway station… Highlights among Tawadros’s work included the elegiac Heat, fading away to very little, and Permission to Evaporate, hesitant and almost minimalist at the beginning yet captivatingly rhythmic from the first bar.

Tawadros’s recital also included a premiere: Rhapsody by the Australian Jessica Wells, a five-minute piece which Tawadros suggested, after the fact, might have benefited from a slightly slower performance. If more consistently western-sounding than the performer’s own work, it’s nevertheless thoroughly convincing, especially in the way it develops small motifs. In terms of tone colour, too, Wells takes the instrument in a rather different direction from much of Tawadros’s music; at moments the oud almost sounded bowed rather than plucked.

If listening to this relay online, note that the pieces are not quite as listed on the BBC iPlayer.