“A giant of British contemporary music, composer Oliver Knussen is remembered and celebrated in a special performance by the newly formed Knussen Chamber Orchestra. Music by Knussen himself is framed by works from Abrahamsen, Birtwistle and Waley-Cohen.” [BBC Proms website] 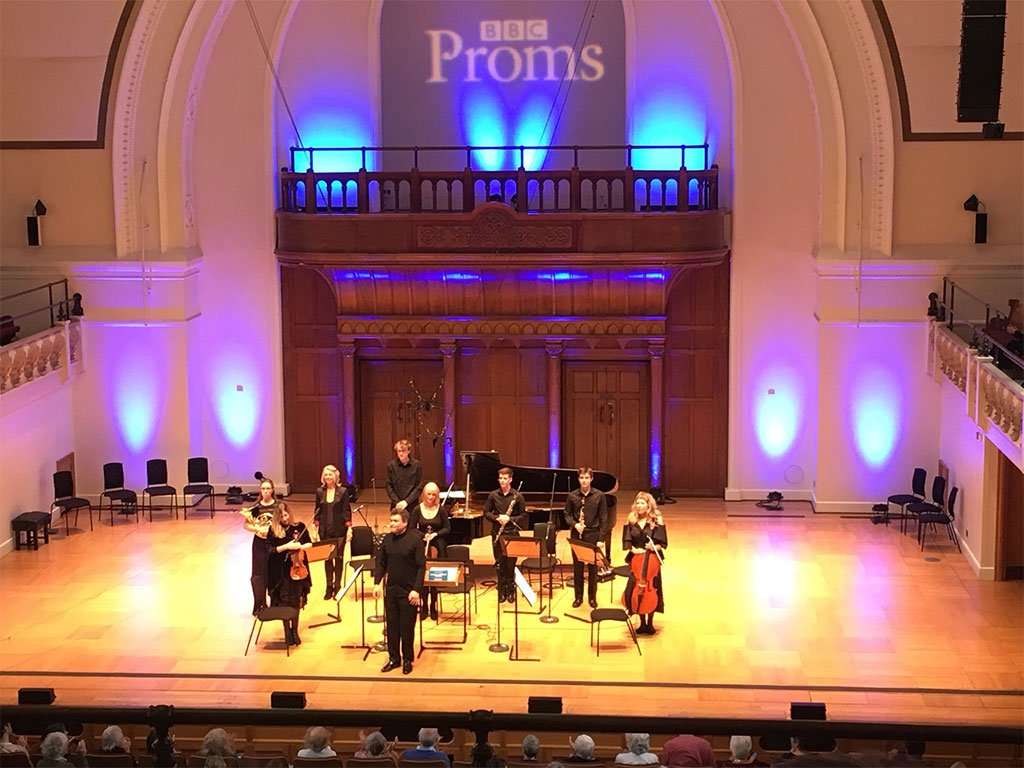 The final stop in this year’s Proms Chamber Music 800-year journey brought us right up to date and featured the newest ensemble in the roster: the Knussen Chamber Orchestra, founded by Ryan Wigglesworth who followed the late Oliver Knussen as Sir Richard Rodney Bennett Professor at the Royal Academy of Music. Formed of students, both current and graduate, from the Academy together with the institution’s professors it is dedicated to pursuing Knussen’s eclectic musical interests.

Typical though was the nod to Knussen’s breadth of musical references. We started and ended with his tributes to other composers: first Purcell, the singular C here passed between the five instruments (piano – Wigglesworth himself – violin, viola, cello and clarinet); finally Knussen’s memorial to Andrzej Panufnik, featuring a mournful cor anglais solo from Tom Bloomfield. The centrepiece was his Metamorphosis Study – from 1971, but revised just shortly before his death – the only fragment extant of a project he had hoped to go back to, performed evocatively by Jonathan Davies, playful and sombre by turns in his instrument’s distinctive registers.

If Metamorphosis was the pinnacle of the concert’s trajectory, the ascent had skilfully paired another Purcell-inspired piece with the commission from Freya Waley-Cohen. Birtwistle’s Fantasia upon all the notes uses a harp as an arbiter between four strings and two winds (flute and clarinet), in a soundworld immediately recognisable as only his. A warble of a phone from upstairs interrupted the stuttering ending, unfortunately. Waley-Cohen’s Naiad adds piano to make an octet and introduces a faster section that seeped into the initial slow tread as an evocation of Nature, beautifully crafted and exquisitely played.

The descent from Metamorphosis also had a pairing: the beautiful sonorities of Hans Abrahamsen’s Herbstlied, so delicate and sonorous, which gave way to the woodwind quintet that is Alastair Putt’s Halazuni, intricate in its interweaving, even though I might not have guessed just hearing it that it was inspired by Islamic art.

Knussen’s Songs without Voices – for octet: strings, winds (though no room for bassoon) and piano – offered the most orchestral sound; its first three short movements evocative of Nature, like Waley-Cohen’s Naiad – winter, a sunset over the prairie (featuring cellist Zoe Walters) and the insubstantial flightiness of a dandelion – before the heartfelt tribute to Panufnik. Typically jewel-like, it was also a fitting tribute to Knussen.