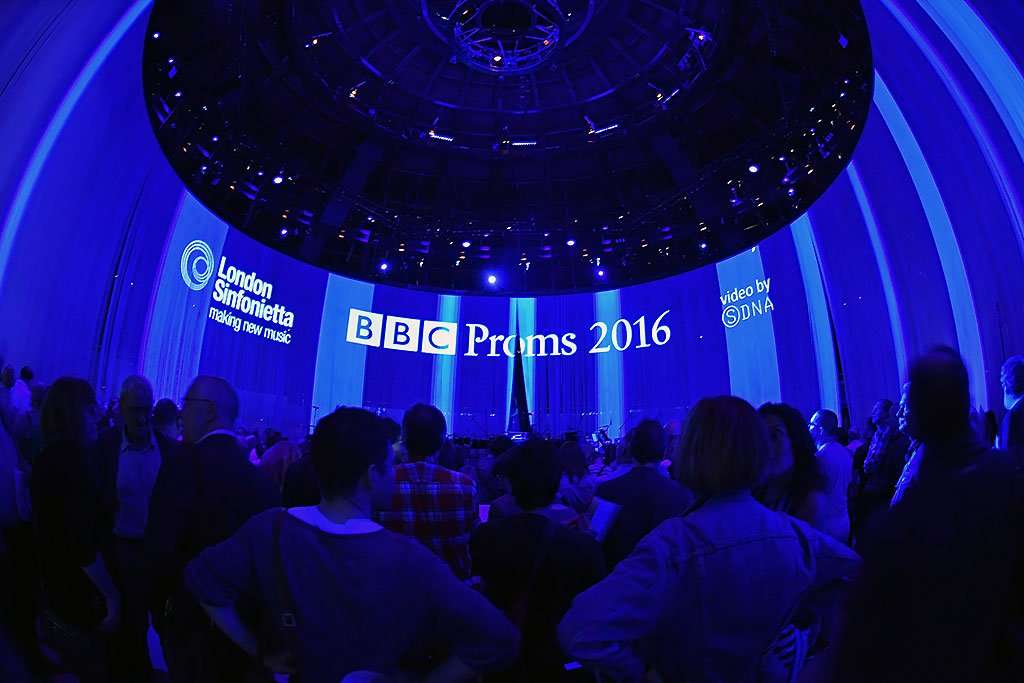 Surrounded by Ron Arad’s Curtain Call (polymer rods defining a circular space inside the Roundhouse) the BBC Proms renewed a 45-year-old association with this venue, where from 1971 there were some late-night and Sunday concerts. The Roundhouse is celebrating its 50th-birthday this year (hence the Bloomberg commission from Arad). Fulfilling the “Proms at …” brief of taking the Proms around the capital this season, here we were for a matinee of contemporary music.

It’s coming up to fifty years since the London Sinfonietta first appeared at the Proms (1 August 1969, with John Tavener’s The Whale), and it was making a return to the Proms at the Roundhouse since the 1970s and early 1980s (Mark Elder was one of the conductors). There was a programmatic reference in this microtonal programme, the return of György Ligeti – here represented by Ramifications – who had featured so heavily in those early Roundhouse programmes (championed by Boulez and others).

The nature of the space informed the performances. Arad’s Curtain Call is perfect for the projection of images, here provided by SDNA Ltd (although some were more successful than others) and the fact that the audience was enclosed in a space within a space allowed the first two pieces to be performed outside the sphere. 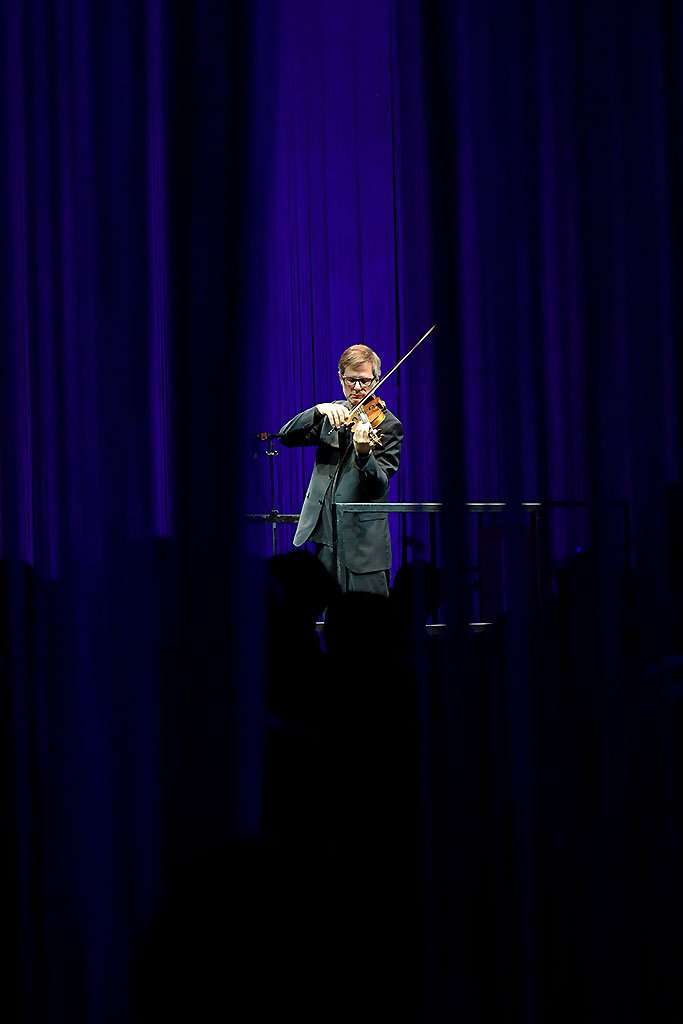 Harrison Birtwistle provided his 2008 Duet No.1 ‘The Message’ for trumpet and clarinet – the players seated in the balcony and lit so we could see their yellow-bathed silhouettes – hurling notes at each other, with a side-drummer between them, used only at the end as if a referee were calling the end of a boxing bout.

Georg Friedrich Haas’s Open Spaces II (inspired by Ligeti and also James Tenney, to whose memory the work is dedicated) moved slightly closer, with four instrumental groups stationed just outside the performing area, the microtonal mishmash (strings tuned a sixth of a tone apart) interspersed by percussion and accompanied by some intriguing images; a geometrical shape dividing to become a desert landscape, before dissolving into a recurring illustration of what looked like sea-anemone antennae. As befits an Austrian composer Haas indulges in Haydnesque false endings, which caught some of the audience out.

The first premiere was from polymath Mica Levi, composer of the score to the film Under the Skin. As interviewed by Andrew McGregor she seemed reticent, but her Signal Before War (for unaccompanied violin) is a concept piece which was miraculous in performance. Jonathan Morton was raised in the centre of the space. Mica’s piece (in which the War is the audience’s applause) is a slow microtonal glissando from low pitch to high, here incredibly well-controlled by Morton. It has the power of intense stillness within constant slow-motion and if there were images projected I was simply not aware of them.

The second premiere was David Sawer’s intriguingly entitled April \ March. Inspired as a ballet score from choreographer Aletta Collins’s idea of a character dropping something when crossing the stage in the first thirty seconds of the piece (with a title from a Borges novel, its plot being in reverse). Scored for a typical Sinfonietta line-up (more or less one of each instrument), April \ March bucked the microtonal thrust of the programme and referenced a wealth of 20th-century ballet music – French and neoclassical particularly. A viola solo starts the action which spirals across the ensemble, suddenly melding into a surreptitious dance form and just as easily slipping out of it. It’s one of those scores that you want both to hear again but also to see danced.

The presence of two ondes Martenots (Valérie Hartmann-Claverie and Bruno Perrault) was for a re-visit to Jonny Greenwood first London Sinfonietta work, smear, from 2004. I’d never been so close to an ondes before and Greenwood’s fascination with it/them was palpable (he owns one!); definitely a classic, which the Sinfonietta is proud to champion.

Ligeti’s Ramifications was preceded by Andrew Gourlay asking each of the string sections to tune a quarter-tone out. The typical febrile soundscape still sounds as fresh when it was written, though rather overshadowed by the intrusion of gigantic silhouetted termites that were projected above. It will work better listening again without the visuals.