“From one of London’s biggest auditoria to one of its smallest – the Proms moves east for a celebration of Restoration theatre music at the intimate jewel-box that is the Sam Wanamaker Playhouse at Shakespeare’s Globe on London’s Bankside. This performance offers a chance to get up close with leading performers and Jonathan Cohen’s crack Baroque ensemble, Arcangelo, which makes its Proms debut in works by Purcell, Blow, Locke and Draghi – including music for Shakespeare’s The Tempest.” [BBC Proms website] 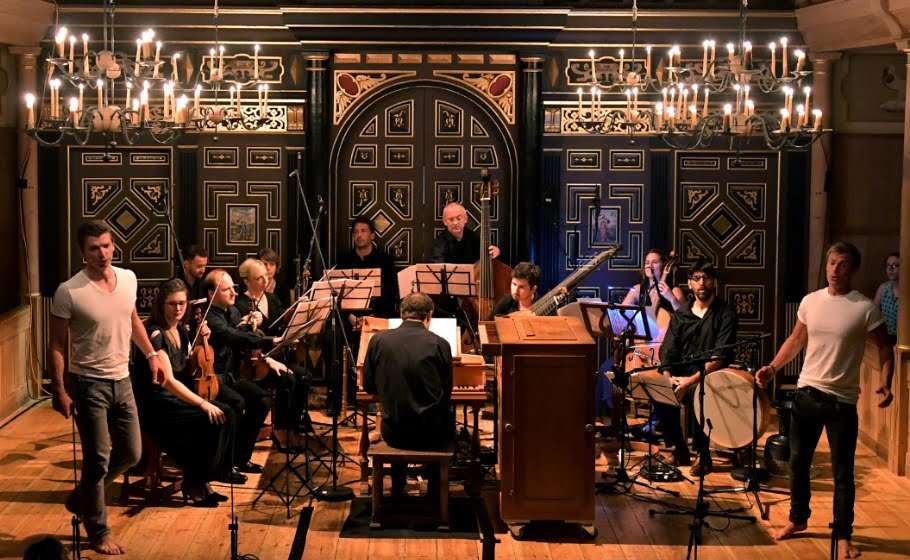 The candle-lit interior of the Sam Wanamaker Playhouse provided the perfect backdrop for this Shakespeare-inspired Prom featuring the ravishing music of Henry Purcell and his contemporaries John Blow and Matthew Locke. The seventeenth-century style architecture enhanced the enjoyment of the entertainment.

On the restoration of the monarchy in 1660, theatres re-opened after a gap of nearly twenty years and Charles II enthusiastically encouraged and attended performances. The English taste was for a combination of spoken drama incorporating songs and musical interludes, and often bowdlerised versions of Shakespeare.

Arcangelo and Jonathan Cohen have made a speciality of performing this period of music from across Europe performed with a freshness that smacks of improvisation. The programme included dramatic and beguiling overtures – ‘Curtain Music’ – dances and voices, semi-staged. The movement devised by Alessandro Talevi contributed greatly to the impact.

The evening began with a sultry and seductive ‘Chaconne’ by Purcell for Timon of Athens. The subtle if mesmerising ostinato was provided by percussionist Keyvan Chemirani. Each repetition increased the emotional and dramatic intensity. ‘I Spy Celia’, a duet for tenor and bass, that sets up the competition for the affections of her; they vied vocally with great good humour. John Blow’s music for Venus and Adonis continued the prey is love theme. Less sophisticated contrapuntally than Purcell, Blow’s folk-riffs dominated within a pastoral feel.

The Fairy Queen was one of the most extravagant productions of the 1690s and included monkeys, swans, nymphs and shepherds. It is unlikely that Shakespeare would have recognised A Midsummer Night’s Dream as the source. Nell Gwynn’s favourite presentation was of The Tempest, with additions by Davenant and Dryden. Locke’s ‘Curtain Tune’ begins sedately enough and the ‘Dance of the Fantastick Spirits’ contains wonderful and frightening percussive effects. Purcell’s ‘Arise, ye Subterranean Winds’ followed, a perfect vehicle to display Callum Thorpe’s mastery of vocal runs of Handelian complexity. ‘Full fathom Five’, real Shakespeare at last, was sung with expressive flexibility by Katherine Watson.

Finally ‘Neptune’s Masque’, attributed to Purcell, an invented amusement with patriotic overtones. Neptune and the god Aeolus are competing for control of the sea. Samuel Boden, as Aeolus, appeared from various parts of the Gallery arrayed in leather-jacket and sunglasses. He epitomised the irresistible combination of fun and fine music that distinguished a fabulous evening.