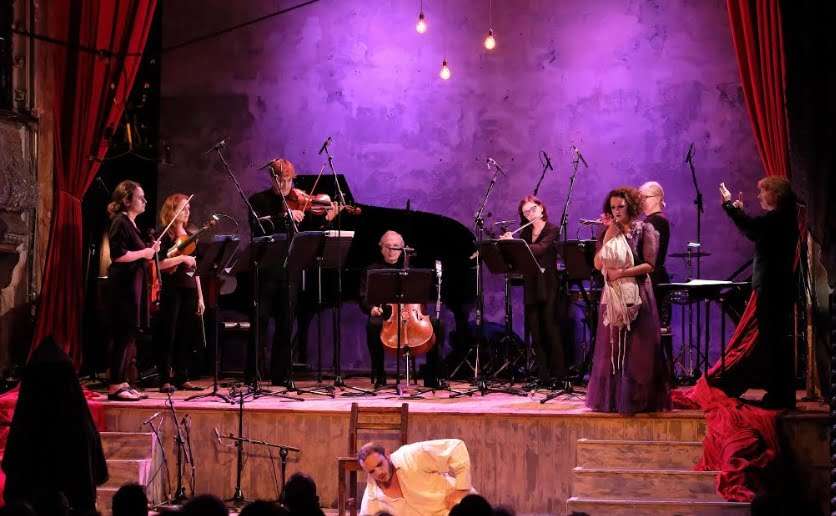 Marking the thirtieth anniversary of the Birmingham Contemporary Music Group, the Proms included Wilton’s Music Hall for the first time. Not quite bedlam (the original Bedlam, St Mary’s of Bethlehem Hospital, was originally not so far away, in Bishopsgate), but, in its dilapidated chic as befits the world’s oldest surviving music hall, a suitable substitute. The programme – played without a break – was conceived with madness at is heart, was an intricate and satisfying whole: very much more than the sum of its already considerable parts.

The connections were finely plotted; the starting point (although last in the programme) – obviously – was Peter Maxwell Davies’s almost half-century-old Eight Songs for a Mad King, portraying what Alan Bennett’s later play encapsulated as The Madness of George III. Based on his possible bouts of porphyria, George did lose his senses and spent many of his days trying to teach his pet bullfinches a tune from a music box, the very same music box Steven Runciman lent ‘Max’ to inspire the piece. A music box is one of the extra instruments (four radios are the others) required by Rebecca Saunders’s Molly’s Song 3 and there were three excerpts from John Luther Adams’s evocative songbirdsongs. You see how interwoven this programme was? And then there is the almost-common factor of the flute (and/or piccolo). 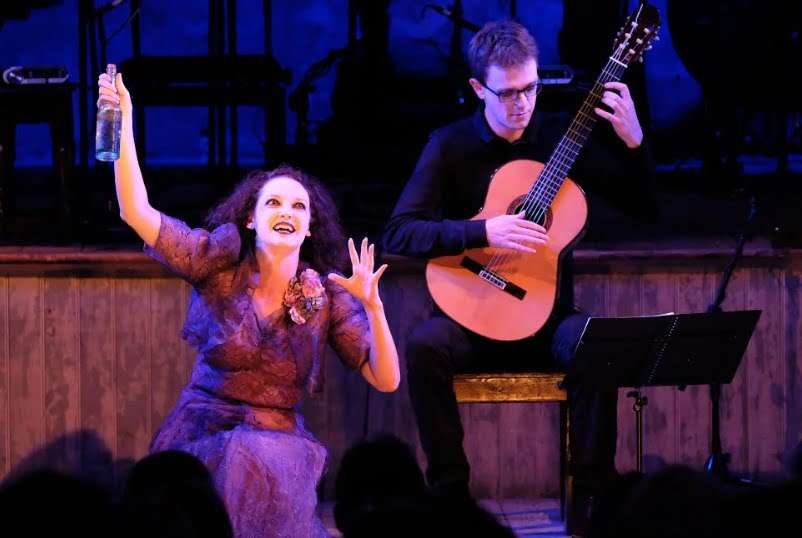 With Marcus Farnsworth on the forestage from the outset in a long white nightshirt, huddled on a chair beside a shrouded object, the audience was immersed for eighty minutes of mesmeric music, subtly directed by Olivia Fuchs with, from the Saunders piece onwards, Sian Edwards conducting.

With percussion stations on both Galleries, either side of the stage, the first of Adams’s excerpts, ‘Morningfieldsong’, had an unearthly sound, which melted into Messiaen’s Blackbird, played – on the upper stage – by flautist Marie-Christine Zupancic and pianist Mark Knoop, Farnsworth below them flinching sometimes as if the flute was driving him mad. Our other singer, Jennifer France, wrapped herself in one of the red curtains at the side of the stage (did Farnsworth’s George think her his wife, in Bennett’s memorable playful phrase “Mrs King”?) before taking centre-stage, pirouetting around Tom McKinney’s delicate accompaniment for the anonymous ditty, introducing madness explicitly for the first time, with its bittersweet refrain “Yet will I sing bonny boys, bonny mad boys / Bedlam boys are bonny.” 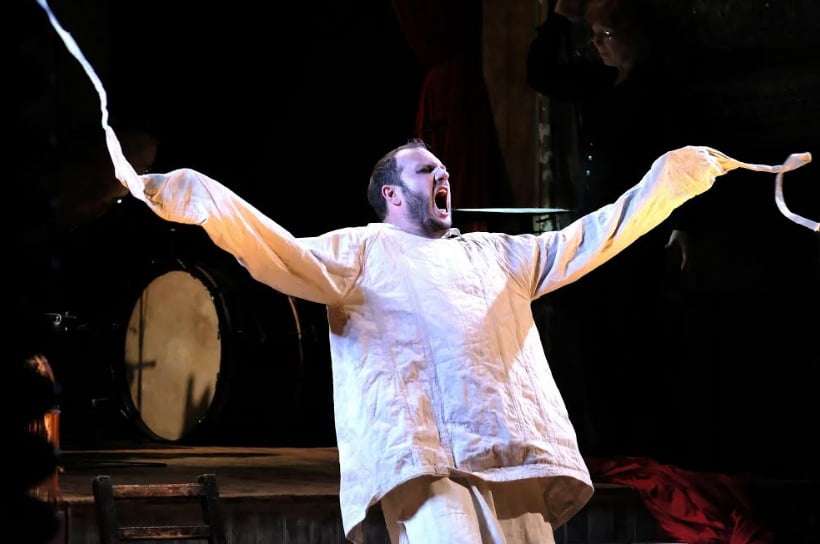 Saunders’s musical evocation of Molly Bloom’s last speech in James Joyce’s Ulysses is set for oboe, viola and guitar; of troubled reverie that not only adds the music box and four radios but also silence as an eloquent participant. It was here framed by another of Adams’s birds (‘Wood Thrush’) and the return of France – with BCMG represented more fully with solo strings, two flutes and harpsichord – for Handel, apposite for its appeal to the birds for news of Almirena’s beloved. Whether Adams’s ensuing ‘Meadowdance’ gave her the news she wanted was left for us to decide.

After nearly an hour, Farnsworth appropriated the proceedings, with ‘Max’ Davies’s help for a virtuoso performance, both vocally and violin-smashingly (it’s an expensive business in instrumental terms) in Eight Songs for a Mad King, uncovering a bird cage from under the shroud. Since last I’ve heard it, I know more of the history of George III’s periods of madness, courtesy of Bennett, but this piece inhabits its own very particular evocation of anguish and pathos; here breathtakingly carried through to the very end, as Farnsworth existed the stage and the hall, by walking round two-thirds of the audience, followed by the bass drum lashed threateningly as an accompaniment to his howling repeated utterances, until his voice disappeared outside: chilling and shattering to complete an intelligent and gripping programme.