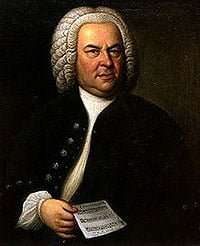 You could be forgiven for thinking that late Beethoven is a walk in the park compared to the uncompromising abstraction of the complete Art of Fugue (or as complete as J. S. Bach left it, plus some appendix material and unreliable attributions), one-and-a-half hours of brilliant, rigorous counterpoint and one of the holy grails of music.

Following on from his recital last year (the first ever at the Proms), harpsichordist Mahan Esfahani has extended his reach with his arrangement of Bach’s epic collection of 14 fugues (including one of doubtful attribution) grouped around four canons, rounded off by a fugue for two harpsichords, the incomplete Fugue with three subjects which suddenly stops and a Chorale Prelude added after the composer’s death to give the work a sense of completeness.

There are many versions, from keyboard to string quartet and larger ensembles. Esfahani has set his arrangement for sixteen period instruments, in groupings ranging from the recognisably baroque to a rarefied sound that would be well-suited to Second Viennese School expressionism. 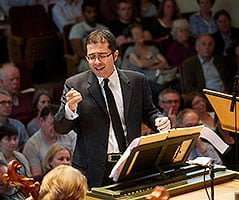 It started conventionally enough, on harpsichord (Esfahani) but quickly diversified – and it was clear from the juggling on music stands of spare flaps of manuscript and different editions that this version was breaking new ground. It didn’t take long for the famous opening ‘contrapunctus’ subject that worms its way through the whole work and which is so freighted with potential to be taken up by other instruments; and Esfahani didn’t slavishly follow the work’s usual four-stave format into a sequence of four-instrument settings, frequently starting an entry with, say, an oboe, then handing the extension over to another instrument. There were frequent doublings to ratchet up emphasis and expression, with that slightly precarious early-music tuning for added piquancy, and passages of continuo-style support lending a bit of buoyancy.

Even though the Art of Fugue offers 90 minutes of the same tonality (D minor) spiralling out into some of Bach’s most extreme chromaticism, Esfahani and his players gave a lilting levity to the faster, more dancing music, enjoying the opportunities for virtuoso flourishes without upsetting the overwhelmingly high-art tone. Seemingly incidentally, their approach showed off the mind-bending independence and clarity of Bach’s ceaselessly inventive writing.

Yet, however brilliant and perceptive Esfahani’s arrangements are, you became a bit too preoccupied with what the next Fugue or Canon was going to sound like, which didn’t quite serve Bach’s offering to his muse of counterpoint. The best of the keyboard versions and at least one of the settings for string ensemble settings retain an intensely private, meditative quality that makes each Fugue – with a bit of leavening from the more relaxed Canons – like a giant climbing onto the shoulders of the previous giant, as the complexity becomes more and more expansive until we reach the severe splendours of the final Fugue with three subjects, performed here with an almost devout concentration. That accumulative power didn’t completely come across, and details such as the repeated-note figures in Fugues VIII and XI, which can broadcast an extraordinary intensity, became buried in colour and texture, and listeners will have to decide whether it’s better to stop where Bach stopped or to progress into the eloquent and romantic add-on Chorale Prelude.

It was also odd that, apart from Christopher Cook’s short introduction from the stage, there was nothing in the printed programme beyond the running order to guide the listener through the maze of inversions, retrogrades, the freakish ‘mirror’ fugues, and canons in extension and diminution – and none of the “Further Listening & Reading” advice that is such a useful feature of the main Proms programmes. No doubt the capacity audience knew The Art of Fugue backwards – and forwards.