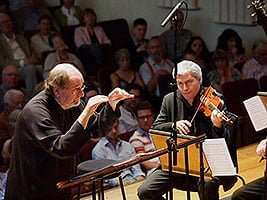 A fascinating history lesson: a recreation of the world’s first professional orchestra, some 250 years after it shut up shop in pre-revolutionary France. The name – Le 24 Violons du Roy – might have fallen from common parlance long ago, but the original ensemble served as house band to the king of France for almost two centuries, witnessing and shaping the entire baroque era. Its modern counterparts are students of London’s Royal College of Music and of Paris’s Centre de Musique Baroque de Versailles, overseen by Sir Roger Norrington, ever probing and provoking in his musical archaeology.

The original orchestra was formed as early as 1570 and was based, as the name suggests, around a core of stringed instruments closely related to those familiar from today’s orchestras. Smaller violins, larger cellos and three different flavours of viola mixed with wind instruments, theorbos and harpsichords to make something closer to the modern orchestral set-up than contemporary ensembles from other European countries. Unfortunately, none of the original instruments survive, having been disposed of as newer models took hold, and the resulting recreation is necessarily something of an approximation.

Norrington’s concept-band tackled works that would have been familiar to the original players – orchestral suites largely drawn from the burgeoning opera scene that engrossed those with money and power in mid-baroque Paris and Versailles. Selections from Lully’s Armide (1686) demonstrated the skill which has made his music some of the better remembered of the period and introduced the startling twang of the baroque guitar. The first of a number of passacaglias to grace the programme demonstrated the transparency of the ensemble; inner parts and workings lit up by the even balance of instrumental timbres. 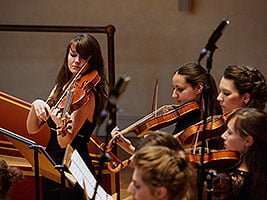 Henry Demarets’s Circé (1694) really took off with the penultimate number, the ‘Prelude pour le Sommeil’, its veiled sadness so seductive. The boisterous bounce on the ‘Gigue’ (with clacking castanets) made way for the largest and most inventive item, Marin Marais’s Arianne et Bacchus Suite (1696). The ‘Ouverture’ swirled with stormy premonitions, but the brightness of the trumpets was the most notable novelty, adding considerable heft to the ensemble’s body of sound. Trumpets had clearly taken hold in France by the turn of the eighteenth-century, cropping up again in André Campra’s Tancrède Suite (1702) and Michel-Richard de Lalande’s Symphonies pour les soupez du roy (1703). This final item was the only piece not drawn from an opera and allowed a window into the world of King Louis XIV: the complex ‘Grande pièce royale’, with which the suite concludes, was one of the monarch’s favourites and he demanded it at least once a week, apparently while eating his dinner.

Sir Roger regaled us with these finer points (and much more) with great comic timing, and BBC Radio 3 host Christopher Cook asked all the right questions. Norrington encored movements from the suites by Desmarets and Marais and, with such an immaculately drilled and youthfully stylish reincarnation of a very old orchestra at his disposal, who could begrudge his thirst for more.