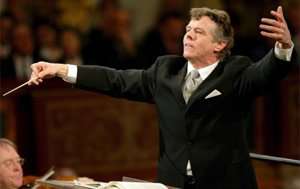 Dutch orchestras rarely perform Sibelius’s music; perhaps this is because their conductors’ predilection has been for the Finn’s symphonic antipode, Gustav Mahler. That said George Szell made a famous studio recording of Sibelius’s Second Symphony with the Concertgebouw Orchestra and there exists a recording of a concert performance of the Fifth under Kyril Kondrashin. More recently Colin Davis has kept the Finnish flag flying over the wonderful Concertgebouw building in less-well-known Sibelius pieces. Previous principal conductors of the Concertgebouw Orchestra, such as Mengelberg, Haitink and Chailly, conducted not a note of Sibelius! (I once asked Haitink why this was in his case and he replied he had never devoted time to study the scores.) Today the Concertgebouw Orchestra is under Latvian-born Mariss Jansons, a conductor of impeccable Sibelian credentials.

Often condemned as an imitation of Tchaikovsky, the First Symphony was Sibelius’s first non-programmatic orchestral work since his student years. But, as the Second Symphony also would, it began life as a programmatic-inspired symphony (as Sibelius was to describe the preceding Lemminkäinen Legends in his last years). Symphony No.1 was to be called Musical Dialogue, based on a text by Heinrich Heine, which may have occurred to Sibelius after a performance of Berlioz’s Symphonie fantastique in Berlin in 1898.

Indeed the whole of the 1890s had been taken up with programme-inspired orchestral works. What suddenly changed Sibelius’s mind from following this well-furrowed path to now compose an abstract symphony? In 1897, a young Finnish composer, Ernst Mielck, had returned from Germany and his studies with Max Bruch and produced the first abstract Finnish symphony. This caused quite a stir in Finnish musical circles. Mielck was 20 years old. Sibelius, already the standard-bearer for Finnish music, was 32 years old. Sibelius was well aware of the gauntlet thrown down by Mielck.

Both composers were the products of a German musical education. If the home of Beethoven and Brahms could inspire a young Finn like Mielck to produce what was, by all accounts, considered to be a radical abstract symphony where did this place Sibelius, whose models thus far had been Wagner, Bruckner and Liszt? It does not take a huge leap of imagination to understand the traumatic effect on the ever-sensitive Sibelius to be usurped by a younger countryman. It would have taken Sibelius a while to expunge his natural inclination towards writing another ‘programme’ work, but he did, and also cast aside German symphonic models for those from Russia, principally Balakirev, Borodin and Tchaikovsky, the latter’s ‘Pathétique’ Symphony had been heard in Helsinki in 1894 and 1897. Perhaps Sibelius wanted to declare his independence from Mielck’s Germanic foundations. It is remarkable how quickly Sibelius shifted his ideals from one culture to another when composing what became his First Symphony. This is what makes listening to this work so fascinating. In terms of details we now know for sure he added the opening clarinet soliloquy during the revision of a year later; he also condensed the finale but kept the great string theme, surely inspired by Tchaikovsky’s Romeo and Juliet. 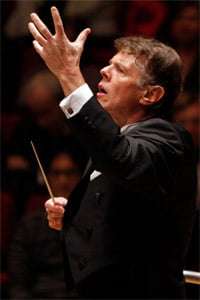 So a Latvian conductor, whose father, Arvid, had assisted the great Yevgeny Mravinsky in Leningrad (St Petersburg) and became a notable conductor in his own right, may be seen to have special credentials in Sibelius’s First Symphony. The rubato allowed to the opening clarinet melody indicated an individual approach and so it proved, one slow and sonorous, and revealing inner parts, particularly in the passionate first movement, so often obscured by swifter tempos. The first glorious tutti displayed a superbly blended sound which was both intoxicating and exciting, the orchestra bringing Sibelius from the cold North into a warmer embrace of a symphonic tradition heard both in Russia and the homeland of Dvořák and Smetana. The slow movement was elegiac, creating an image of a swan in flight as opposed to a swan on dark, Nordic waters. It was very beautiful and heralded a scherzo of passionate momentum, though not too rushed as to mitigate the thudding rhythm on timpani and strings. The finale is tricky to perform convincingly. Some conductors throw caution to the wind and hurtle towards oblivion at a breakneck pace. Jansons kept everything on a tight rein with moderate tempos for the tempestuous sections and the string theme that recurs to lead to the last, soft cadence that always seems to catch the unwary listener by surprise. There was much to ponder after hearing this wonderful, if slightly idiosyncratic, performance of Sibelius’s First Symphony.

In the concert’s second half, five songs of Henri Duparc received a rare outing, even more so with orchestral accompaniment, often added forty years after the original composition. Anyone familiar with Granville Bantock’s “Sappho Songs” would feel at home with the soundworld of Duparc. Alas both composers share a rarity value in concerts. Duparc takes delight in allowing his listener to luxuriate in his imaginative musical world; gracious, heavily in debt to Wagner, relying more on atmosphere than memorable melody, these songs left a wonderful impression, Magdalena Kožená and the RCO projecting the music’s refined romanticism in a sophisticated and heartfelt way. Kožená offered the last of Debussy’s “Trois ballades de François Villon” as an encore.

The Second Suite from Ravel’s Daphnis et Chloé opened with the most beautiful flow of sound, a performance basking in the glow of a warming sun eventually culminating in the full glare of heated passion that would not be denied in the closing bacchanal. For post-coitus repose we were offered ‘Clair de lune’ from Debussy’s Suite bergamasque (presumably in Caplet’s orchestration), and then ‘The Wild Bears’ from Elgar’s Wand of Youth Suite No.2.