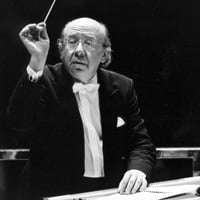 For music lovers of a certain age, it is not easy to accept that a whole generation of BBC administrators will have grown up, and no doubt moved on, since that far-off period when Gennadi Rozhdestvensky was central to Proms planning as Chief Conductor of the BBC Symphony Orchestra. In some respects little has changed. Never mind that many of the maestro’s pioneering recordings of Russian-Soviet repertoire have (temporarily?) disappeared from the lists. Or that he himself now favours generally slower tempos. For a man in his mid-70s (born 1931 in Moscow) he is in fine fettle.

Inheriting a bizarrely-shaped programme, which may or may not have been congenial to him (Rozhdestvensky’s appearance came about with the abrupt withdrawal of the RPO’s titular head, Daniele Gatti)), this near-legendary figure presided over performances more patchily personalised than of old yet by no means more patchily played, unless you object to the relative thinness of the RPO’s string sonority. The Rozhdestvensky concert remains on this evidence an idiosyncratic, and risky, kind of total music-theatre in which both players and public must be prodded into responsiveness on the night. The baton is still long and its movements still unpredictable. And it is discarded altogether for much of the show. Rozhdestvensky likes to stay physically close to his musicians (he doesn’t stand on a podium) and often appears to be leaving them to it save for a nod and a wink.

With little scope for overt surrealism from the featured composers, the BBC lighting-designers did their best to compensate: autumnal red and orange for the Brahms, peppermint and lime for Elgar, pink and lilac for Strauss’s Oboe Concerto and a bolder pink and scarlet for what was billed as the Suite from “Der Rosenkavalier”. That particular compilation may not have had much to do with Strauss himself but it does include the Act Three ‘Trio and Love Duet’. Not so tonight’s lopsided souvenir. A large camera team including the return of the giant crane provided additional distractions.

Whether it was lack of preparation or the fact that this was the hottest night of the year (a full house too!), the RPO offered mainstream, somewhat lacklustre interpretations enlivened with italicised, à la Rozhdestvensky sections. This was particular odd in the truncated Strauss in which the big waltz tune was cosseted delightfully into life one moment, only to be rendered smooth, coarse and metrical in the next. Elgar’s ‘Enigma Variations’ received an intriguing if uneven reading in which dark clouds were evident in the expressive emphases of the theme and real passion in the composer’s loving tribute to his wife. One expected ‘Dorabella’ and the like to be delightfully turned, and here the woodwinds did not disappoint. But then ‘Nimrod’ too was profoundly hushed at the start with similar care displayed in the elegiac sotto voce reveries of the penultimate ‘Romanza’. In the finale, unfeasibly broad pacing and soggy rhythmic attack blunted the impact of the invention and made it turn pompous. Unless of course this was some kind of anti-Imperialist critique! While the organ contributed overwhelming tone, the “dynamic energy” referred to in John Pickard’s insightful note was in dangerously short supply.

Much of the audience seemed inattentive, bronchial or otherwise infirm. A few had come to see Alexei Ogrintchouk, principal oboe of the Royal Concertgebouw Orchestra, in a concerto he has played before in the UK and which is evidently a speciality. He can’t stop his keys clicking but he can scale down his big, rich tone to an evocative whisper. What impresses most is his ability to spin out Strauss’s long solo line with the right kind of ecstatic effortlessness. From my seat it was hard to tell whether the reduced orchestral textures lacked crispness although it was evident that Rozhdestvensky, always an expert accompanist, was taking pains to ensure that the soloist remained audible in the recesses of the barn. For me the piece outstays its welcome, its self-satisfied autumnal glow too easily rationalised as an ennobling attempt to redeem German cultural norms. Shallow and escapist it may or may not be but it is worth an airing when the revivification is as vivid as this one. How such an established, self-confident, extrovert performer can possibly be marketed as a BBC Radio 3 New Generation Artist is one of life’s many small mysteries. No doubt the arrangement suits both parties!