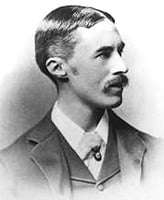 The classical scholar A. E. Housman remains famous mainly for his poetry cycle “A Shropshire Lad”, a collection of short poems on themes of love and death in romantic evocations of rural life before the First World War and a paean of praise to all the young lads who died in the Second Boer War.

Every succeeding generation has taken Housman’s verse (which has never been out of print since it first appeared in 1896) to its collective heart and, despite at times some purple passages, they have found relevance and succour in the poetry. Housman was not, however, a Shropshire lad himself. He was born in Worcestershire but had romantic notions about Shropshire and its farming communities and chose to write about the county, although he never went there until after the cycle was written. He was an academic who lived in London and Cambridge, so that his Shropshire was an imaginary place and as such he often got names and other details wrong. But no matter, for it is a moving piece of work and in its simplicity is very easy to read and digest and obtain great feeling from the words that describe the shortness of our life on earth and the long death that is to follow.

Housman’s words have been set to music by many: Arthur Somervell set the Shropshire poems in 1904; George Butterworth wrote two collections of settings of six of the poems; Ivor Gurney set other Housman verses, and John Ireland, Michael Head, Ian Venables and Samuel Barber all worked on Housman’s writings. Gerald Finzi began some settings but never finished them but other English composers such as Arnold Bax, Arthur Bliss and Lennox Berkeley were all keen adherents.

It is, however “On Wenlock Edge”, Vaughan Williams’s settings (for tenor, string quartet and piano), that survive to this day in the concert hall, although Housman himself was never very pleased with the result and could not understand why Vaughan Williams edited out some of his lines. The composer upheld his right to set his own choice of words and omit any by the poet he thought inappropriate or unworthy.

The final work takes six of the poems and they are mainly those dealing with rural matters on and around Wenlock Edge, a limestone escarpment near Much Wenlock in Shropshire. The title song compares the same part of the county with how it would have been in Roman times, for the wind and the snow were the same then as now. There’s more wind in ‘From far, from eve and morning’, while ‘Is my team ploughing?’ are the thoughts of a young man killed in action as life and love continue on the land and in the heart. Romantic love rears its head in ‘Oh, when I was in love with you’ and in ‘Bredon Hill’ there’s talk of a wedding but there’s no bridegroom. Finally, in ‘Clun’, there’s only doomsday to look forward to, a statement of out and out depression and desperation, although the poems in themselves are not depressing to read.

Outwardly Housman was a dry, classical scholar descended, as someone once said “from a long line of maiden aunts”. He may have been prissy and fastidious about getting everything in his academic research correct, but inwardly he was a romantic poet suffering from the unrequited homosexual love for his friend Moses Jackson.Vaughan Williams’s music here shows his influences, not only in the folk-music tradition which he helped to foster, but also influences from Europe and in particular the music of Ravel. Indeed Ravel, who praised Vaughan Williams’s settings, played the piano for the French premiere of “On Wenlock Edge”. 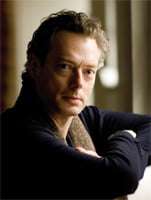 The Nash Ensemble and tenor Mark Padmore gave a sympathetic and uplifting performance of the song-cycle, creating the Vaughan Williams soundworld so effectively with a very balanced contrast between the dark poetry of Housman and the lightness and near fragility of Vaughan Williams’s beautiful music. Padmore’s voice evoked a bygone era with a plangency that was at times quite breathtaking.

Samuel Coleridge-Taylor was, like Vaughan Williams, a pupil of Charles Villiers Stanford. Coleridge-Taylor was born in London to a Sierra Leonean father and an English mother. He studied at the Royal College of Music under Stanford but sadly died at the early age of 37. In his time he was famous for his cantata “Hiawatha’s Wedding Feast”, a work only rivalled in popularity by Handel’s “Messiah” and Mendelssohn’s “Elijah”.Coleridge-Taylor’s Clarinet Quintet of 1895 followed a challenge by Stanford urging him to write a clarinet quintet to match Brahms’s example, and Stanford was unduly impressed by the result. It is a fine piece that doesn’t sound too English but then neither does it sound Germanic. It is lyrical and charming with some abiding sweet airs although it perhaps lacks the rigour and indeed the vigour of the German tradition. The Nash Ensemble with Richard Hosford on clarinet (who was not overtaxed here in Coleridge-Taylor’s sometimes-simplistic score) played the piece with great feeling as if the musicians were truly relishing this rarity.