Verdi
Simon Boccanegra – Opera in a Prologue and three acts to a libretto by Francesco Maria Piave after the play by Antonio García Gutiérrez [1881 Version, libretto revised by Arrigo Boito; semi-staged performance, sung in Italian] 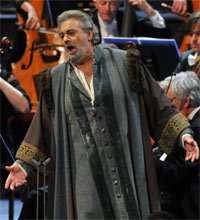 Completing the operatically grandiose opening weekend of the 2010 BBC Proms season were Antonio Pappano and Royal Opera House forces in a semi-staged performance of “Simon Boccanegra”, following a run in Bow Street over the past few weeks. Those unable to get tickets for the full staging would have had a fair idea of what the production was about from the acting and the costuming of the principals, and on this occasion the singing was rather more even that it was on the first night of the opera-house run.

Plácido Domingo’s tenorial presence in the baritone title-role was of course a major draw, and so the Hall and the Arena was absolutely packed. Domingo is one of the most versatile singers in the pantheon of opera’s long history. Few tenors have encompassed such a diverse repertoire of roles and styles with such accomplishment, and the fact that he can still deliver a performance of such theatrical and vocal integrity in his late-sixties is little short of miraculous. All the familiar trademarks were there – a warmth and robustness of sound, vocal colour matched to dramatic situation, sense of line, well-nigh-perfect diction, dramatic integrity and generosity of spirit. Not surprising that the audience rose to give him a standing ovation at the end – recognition of his extraordinary career as well of this particular performance and portrayal. 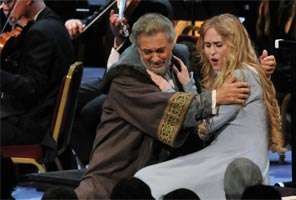 Commentators on the recent Covent Garden run have noted that excellent though Domingo’s performance is, the voice remains perhaps too tenorial for the role. That is correct, in that a baritone sound stretching up into the higher reaches of the stave somehow sounds more appropriate than a tenor sound lowering itself down. This seemed less troubling in this performance than in the theatre for some reason – perhaps because the spacious acoustic allowed the darker hues of Domingo’s voice more prominence. There was a sense that in scenes where Adorno is also involved there was not enough distinction between the timbres of the protagonists; evident in the ensemble of the Council Chamber scene and particularly so in Act Two with Boccanegra, Amelia and Adorno. However, that critical latter scene was here so intense that these niggling reservations were quickly brushed aside.

Domingo was by no means the run-away star, for the cast as a whole is about as good as one can get today. Ferruccio Furlanetto has also spent much of his career portraying Verdi’s bitter and disillusioned older men. As Fiesco he has absolutely that cavernous and focused bass sound the part requires, and he too knows how to use language. The haughty nobleman’s implacable hatred for the arriviste Boccanegra was there in every utterance – every time he used the word “Doge” it was with a vocal snarl that immediately underlined the character’s motivation. He was extraordinarily moving, if slightly histrionic (forgivable in the space), at the Boccanegra-Fiesco reconciliation at the end.

In the true tenor role of Gabriele Adorno, Joseph Calleja caught the audience’s imagination completely – his ‘Sento avvampar nell’anima’ and the subsequent ‘Cielo pietoso, rendila’ were show-stopping. He had all the fire and metal for the first part and then the lyricism and introspection for the latter. His slightly covered voice with its attractive resonance is perfectly suited to this type of role and he has the Verdian idiom to a tee. In these days of short-lived ‘wonder tenors’, Calleja looks to be the one who is pacing his career as carefully and as intelligently as did Domingo. 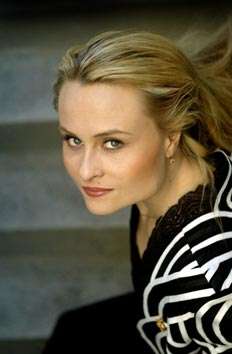 Marina Poplavskaya also seemed to be transformed by the occasion, for sometimes she has appeared to be only intermittently engaged in the performance. Here her technical prowess and commitment were abundant; her quiet high notes exquisitely placed and sounded, her trill neat and affecting, and her tone consistently at its creamy best. She was more affecting dramatically than in the theatre, too, charting Amelia’s predicament at being caught between love for her re-found father and Fiesco and Adorno for the most part unerringly. I found it odd that Amelia should so publicly embrace Boccanegra in the council-chamber scene, when it is surely the uncertainty of her relationship with him that so enrages her lover. Jonathan Summers was an embittered and dry Paolo, Lukas Jakobski an imposing Pietro and Lee Hickenbottom made you notice the Captain.

The ROH Chorus was on as thrilling form. The Royal Opera House Orchestra relished its opportunity to play outside the cramped confines of the Covent Garden, and typically one heard detail that does not register from a pit. Antonio Pappano’s idiomatic, theatrical and singer-friendly conducting meant this was a reading of sweep, but with subtlety, though he himself was occasionally on the noisy side. Verdi’s shimmering string writing that so strongly evokes the sea was beautifully rendered. Bassoon and other low woodwind had a plangent expression that was notable, and the brass was vibrantly exciting in the martial episodes.

This was a perfect example of why we have and continue to need an international opera house to deliver of the best – I hope enough politicians who care and matter were in the audience.