A somewhat gruelling programme from the BBC National Orchestra of Wales, under its principal conductor Thierry Fischer, brought together three works written under the cloud of war, two of them particularly weighty.

Benjamin’s Britten’s Sinfonia da Requiem, completed in 1940, made a slightly awkward start to the concert, with Fischer’s interpretation not quite making it off the ground. The ‘Lacrymosa’ generated considerable tension with the brittle octaves of the opening, but this soon dissipated due to a slower than usual tempo. Meanwhile the destruction wrought by the ‘Dies Irae’ felt too controlled, though sparse fragments did lead to a particularly beautiful start of the ‘Requiem aeternam’, offering consolation amid the wreckage. There were some fine woodwind solos here, but the inherent power in Britten’s music was often kept at arm’s length. 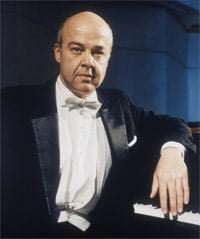 By contrast Prokofiev’s First Piano Concerto, an impish work, scuttled through its linked sections with plenty of melodic charm. Alexander Toradze launched into his solo part with such brio that the piano visibly shook, and his eagerness to bring forward the main theme led to several partings of the ways with the orchestra. Toradze’s mannerisms confirmed his total commitment to the piece, but his especially distracting habit of stamping on the floor off the beat provided some unwanted percussion! There were some outrageous instances of holding back on the second theme – of which the composer would likely have approved – and when the big unison melody reappeared for the final pages, Fischer chose to speed up on the approach, the resultant rush thrilling but ultimately disjointed. Despite the qualms of ensemble and rhythmic clarity, this was a performance in keeping with the spirit of the piece.

Shostakovich’s ‘Leningrad’ Symphony fared best. The tricky first movement was ideally paced, its notorious side drum episode extremely well-judged and performed. When it began, at a barely audible volume, an added frisson was provided by a distant helicopter, just as when the quite music reappeared, a siren sounded outside. These uncanny distractions served as unexpectedly vivid references to the wartime plight of Shostakovich and his compatriots, with Fischer ensuring the empty triumphalism of the approaching invasion was hammered home.

The BBCNOW brass excelled itself throughout the symphony, as did percussion and woodwind, with special mention deserving for bass clarinettist Tom Lessells, his beautifully phrased solo in the second movement accompanied by nervously fluttering flute lines. Fischer was at his best here, lightly balletic when the triplet time was in evidence. Meanwhile in the march episode of the third movement, the threat of war was once again exposed, the cold glint of the strings also in evidence. Fischer went for and secured a massive sound at the symphony’s finish, and the thrill of C major was particularly welcome. That said, the peroration was securely judged, so that the sense of victory was deliberately exaggerated and, as a result, ultimately empty.