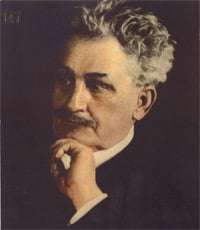 The effective sabotaging of one’s career in the wake of major success is discernible throughout the arts in all eras: one of the most striking modern instances is that of Janáček just over a century ago. Even before his breakthrough in 1904 with the staging of “Jenůfa”, he had embarked on a project whose bizarre combination of autobiography and fantasy – along with its high degree of compression (the whole work playing for around 75 minutes) and its sheer number of scenes (16 in the half-hour first act alone) would have stretched the resources of even the most well equipped opera houses.

As it was, “Osud” (Fate) went non-produced for over half-a-century following its completion in 1905; there was no complete recording until the mid-1970s and just one UK staging – by English National Opera in 1987. Earlier that decade, however, Simon Rattle had given a concert performance which confirmed just how impressive the work is from a purely musical standpoint and also how significant in terms of Janáček’s evolution as surely the most significant opera composer of the twentieth century – both qualities that were scarcely less in evidence during this Proms outing under Jiří Bĕlohlávek. 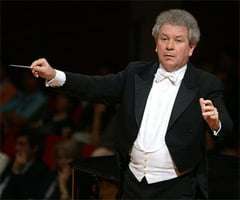 The ‘fate’ of the title emerges in different guises over the course of each act. In the first, set at a spa resort in which characters and situations come and go with cinematic swiftness, it engenders a re-encounter between composer Živný with his lover (and mother of his child) Míla – whose feelings are quickly rekindled to the horror of the latter’s moralistic mother. In the second, set in Živný’s studio four years later, it precipitates a confrontation between Míla and her now deranged mother in which they fall from a balcony to their deaths as Živný and his infant son Doubek look on in horror. In the third, set at a music conservatory two decades on, it underlines the realisation of Živný’s students that the unwritten final act of his opera is being played out as he (to the stricken horror of his son, himself a student) relives painful memories of his wife during a violent thunderstorm.

Such a combination of full-on verismo and proto-Freudian speculation may not make for the most consistent of stage-works, but it does inspire from Janáček some of his most potent music. The first act’s heady intermingling of drama and comedy, itself summed-up by the uniquely intense waltz music that underpins the whole; the second act’s breathtakingly swift traversal from domestic warmth to high tragedy; and the third act’s vivid alternation of lively ensemble and inward monologue – all are achieved with an innate conviction which is only heightened by the strangeness of its context.

For this concert-staging, Annilese Miskimmon opted for a straightforward though effective presentation which afforded the singers ample presence at the front of the platform while enabling them to assume peripheral positions in the interest of the unfolding drama. Lighting was rarely less than appropriate, though as a succession of primary and filtered colours accompanies so many Proms performances these days, its overall impact was less than it otherwise might have been. Most importantly, the quirky originality of the ‘three novelesque scenes’ was heard to full advantage. 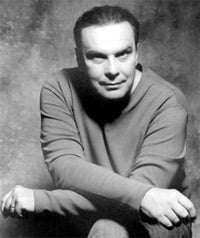 The cast was a fine one. Štefan Margita was equally at home in the charged dialogue of the first act as he was in the amorous asides in the second and the impassioned soliloquy of the third. Amanda Roocroft brought out the inhibition and soul-searching which informs the unfortunate Míla, while Rosalind Plowright’s powerful but not overbearing assumption of the Mother suggested a future in those Janáček roles synonymous with the likes of Josephine Barstow and Anja Silja.

In the smaller roles, Aleš Briscein evinced worldly wisdom as Dr Suda, Aleš Jenis was equally secure in the impulsive part of Verva, while Owen Gilhooly was a characterful Konečny. There were piquant cameos from Ailish Tynan as the put-upon schoolteacher Miss Stuhlá and Martina Bauerová as Miss Pacovská. Other parts were ably taken, as appropriate, by members of the BBC Singers – their contribution to the outer acts went much of the way to securing that indefinable yet claustrophobic quality which contributes to the dramatic and emotional acuity of this work, as it does of Janáček’s later operas as a whole.

Otherwise, this was very much Bĕlohlávek’s evening – his handling of the kaleidoscopic follow-through of the first act, the violent contrasts of the second and the cumulative intensity of the third leaving no doubt as to his identity with the opera; not least when the playing of the BBC Symphony Orchestra seemed even more attuned to the idiom than it was in Pierre Boulez’s recent Janáček prom. As with Bĕlohlávek’s account of “The Excursions of Mr Brouček” in February last year, this was a valuable act of restitution for a flawed but intermittent masterpiece and one that equally deserves a commercial release.

A pity that many of those attending chose not to do so for the performance of Dvořák’s first set of Slavonic Dances that occupied the concert’s first half. Without summoning either the blistering energy or the unbridled vitality of past exponents, Bĕlohlávek secured playing of great subtlety and affection – not least in the gentle mood-swings of the second dance or graceful minuet of the fourth. Arguably finer as individual pieces and certainly more cohesive as a whole, the Opus 72 set of Slavonic Dances would have been even more welcome in their inclusion: perhaps Bĕlohlávek might oblige next Proms season?