Stan Tracey
Genesis [The Beginning – The Light – The Firmament – The Gathering – The Sun, Moon and Stars – Feather, Fin and Limb – The Sixth Day] 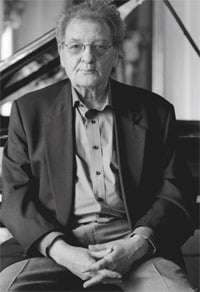 Some 23 years since writing his acclaimed suite for big band, Genesis, Stan Tracey made his Proms debut (a late-night gig) at the age of 82. Stan isn’t as sprightly on his feet as he once was; his entrance (and exit) was slow and careful, but once in front of the piano there was never ever a sign of fatigue – this is a musician still at the top of his game.

Like many of the most gifted musicians, Stan is modest, even self-deprecating about his achievements. He is known as the “Godfather of British Jazz” and not without justification. His seven-year tenure as pianist at Ronnie Scott’s jazz club in the 1960s gave him the opportunity to play with some of the world’s greatest jazz musicians including tenor-saxophonist Sonny Rollins who famously said about him at one concert: “Does anyone here know how good he is?”. Stan’s chat with Geoffrey Smith, presenter of BBC Radio 3’s “Jazz Record Requests”, was short and left the small audience feeling somewhat uncomfortable. Smith valiantly tried, but failed, to coax out little more than ‘number, rank and name’ from Tracey who simply wanted to play.

Stan has been a bandleader since the late-1950s; though the faces have changed over the years the consistent use of leading musicians from the international jazz scene has remained consistent. With a mixture of some grey hair and more youthful players Tracey’s orchestra gave a sprightly performance, many of the movements rocketing along when compared with the 1987 recording.

Written in seven distinct movements, Genesis begins, appropriately, with ‘The Beginning’: a primal growl that describes a world without form and void. Tom-toms and the remainder of the band, Alan Barnes starting on baritone sax, soon joined the opening piano solo. Next comes ‘The Light’ – a quiet reflection rather than a triumphant outpouring. The remainder of the Suite follow one after the other with only the briefest of pauses between movements – time though to applaud between movements (and during them too) as is de rigueur in the best of jazz clubs.

‘Feather, Fin and Limb’ – the sixth movement – echoes Miles Davis in so many ways, but the whole piece is clearly crafted in the workshop of Duke Ellington and Theolonius Monk – both have been major influences upon Stan’s compositional and performing style. The final movement, ‘The Sixth Day”, here lasted almost three minutes longer than on the recording; this was largely due to the extended drum solo by Clark Tracey, Stan’s son and co-performer for the last thirty years. But the augmentation is worth every extra second as young Tracey (now in his late 40s) shows that he is his father’s son in terms of musical invention and technical surety. Mornington Locket’s electrifying solo on soprano sax lit up the audience in this movement, too.

The brief encore from Stan, Mabel Wayne’s “Little man, you’ve had a busy day” made a perfect ending to a wonderful night of musical creation. On the seventh day the bible says that god rested. There’s no rest at the BBC Proms!