There was a distinct air of remembrance at the Royal Albert Hall for this Prom. Kurtág’s three-part Stele – composed in memoriam for unnamed persons (although the third, an epic elongation of a piano piece he had then just composed to the memory of his teacher András Mihály) – was paired with Mahler’s monumental Ninth Symphony. 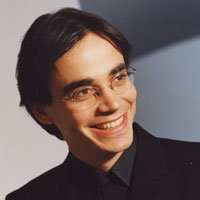 This latter is often (if erroneously) taken as Mahler’s farewell to life – especially as he did not live to hear its first performance. If proof was need that this is less than half a truth, you need only look to next Tuesday’s performance of his Tenth Symphony (admittedly made performable by Deryck Cooke) to put paid succinctly to that theory. While there is no doubting its musical melancholy, you can argue that it is as much to do with a farewell to tonality (this was at a time when Schoenberg was to make the final leap) as a farewell either to Mahler’s dead daughter or the break-up of his marriage.

One thing is certain: Ivan Volkov’s performance was of such stature to concentrate the audiences’ minds on the music not theoretical inspirations, although there was a smattering of applause between movements. From the very opening, the sparse, almost disparate soundings of notes where tied into an overall purpose that was clear-sighted in its trajectory. This was not a performance to dwell on farewells; rather, quite rightly, it offered some resolution in the finale’s ever-slowing utterances, that were serene not morbid.

They would have been infinitely more so had not an unfortunate sneeze punctured the final paragraphs, worsened not only by a knocked-over glass in the debenture boxes in the silence before the violas’ final phrase but also, as Volkov held the silence, a completely jarring mobile ring broke the mood.

Curiously, the stage looked rather sparse in the Mahler, given that Kurtág requires so many extra players, including contrabass clarinet and Wagner tubas, as well as a battery of tuned percussion. Equally spare as Mahler in his use of the crowded platform in the outer movements, Kurtág’s middle movement is a blast for brass, forming a raucous centrepiece, from which the finale’s overlapping repetition of a ten-note chord ebbs – like the Mahler would later – into silence.

On top form, the BBC Scottish Symphony continues to develop a fantastic sound under Ilan Volkov, who has built on Osmo Vänskä’s hard work and fashioned a flexible, responsive band that can hold its head high in any orchestral company.