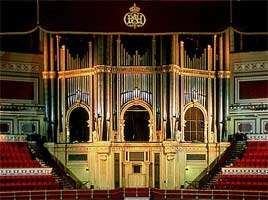 This first concert of BBC Proms 2008 (the first under the control of Roger Wright) was an overture for the season as a whole. Not only did the programme include music by Olivier Messiaen and Elliott Carter, whose centenaries are being celebrated this year, but also appearances by three soloists due to appear again over the summer. It also provided three outings for the Royal Albert Hall’s Willis-made organ, which features prominently in a number of forthcoming concerts.

The evening opened with Richard Strauss’s “Festliches Präludium” composed for the opening of the Vienna Konzerthaus in 1913. Because the piece requires vast orchestral resources and has a poor reputation (Strauss biographer Norman Del Mar describes it as “an inflated trifle”), it is rarely heard. However, with the opening organ theme given enormous presence by Wayne Marshall, imaginative orchestral playing under Jiří Bělohlávek, and Strauss’s request for twelve distant trumpets fulfilled with the help of the Royal College of Music, the work made a strong impact.

With the orchestra reduced to around 30 players, Mozart’s Oboe Concerto provided complete contrast. Nicholas Daniel (using his own cadenzas) was outstanding, providing an interpretation that brought to life the music’s charm, wit and depth, helped by lithe orchestral sound. Daniel was unafraid to deploy some extremely quiet playing in the Adagio and altogether the result was spellbinding.

Strauss’s “Four Last Songs” was due to be sung by Karita Mattila, but illness prevented her appearance. Christine Brewer came to the rescue and has a wonderful voice for Strauss’s music; she accommodated the soaring lines with composure and eloquence, while Bělohlávek’s conducting was sensitively paced and well balanced. However, a slight lack of gravity in the orchestral playing resulted in the emphasis being on the songs’ sensuous beauty rather than their emotional depth.

Messiaen (1908-1992) was represented by ‘Dieu parmi nous’ (God Among Us), the finale of his nine-part meditation for organ, La Nativité du Seigneur, from 1935. Once again, Marshall brought forth a hugely imposing sound from the organ, but this time, despite a suggestion of mystery and some electrifying climaxes, there was a sense that the performance was a showcase for the interpreter rather than the composer. 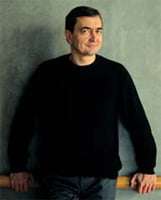 No such problems were apparent in Pierre-Laurent Aimard performance of Beethoven’s Rondo, which may have been intended as the finale of what we know as the Second Piano Concerto. With Bělohlávek a responsive accompanist, Aimard’s playing providing a satisfying combination of verve and refinement.

Another centenary composer, Elliott Carter (who turns 100 in December), was represented by Caténaires, which he wrote for Aimard two years ago. The four-minute piece has no chords, instead featuring a rapid sequence of notes across the whole spectrum of the piano. Offbeat accents give the music an agitated air. Aimard provided a dazzling performance.

The evening was rounded off by Scriabin’s The Poem of Ecstasy in the centenary year of its first performance, the day before Elliott Carter was born! The quality of the BBCSO’s playing suggested a lot of rehearsal time had been invested, impressive both in terms of instrumental solos and massed ensemble. Bělohlávek brought atmosphere – Klingsor’s magic garden never far away – and a sense of organic development. Perhaps the final chord could have lifted the roof a little more, but altogether this was a very satisfying performance to conclude to a well-stocked First Night.