Fireworks, an ode and a hymn of praise were just three of seven pieces chosen to raise the curtain on the 115th BBC Proms season. Rather than programme a single large-scale choral work, as used to be the case, the BBC now offers through the opening night a window on to the season’s themes and possibilities.

The mood was celebratory from the first flourish of Stravinsky’s ‘Fireworks’, well detailed and tautly sprung, its translucent orchestration providing a natty introduction for Stravinsky’s complete ballet-scores to be heard throughout this season.

Chabrier’s “Ode à la musique” creates something of a perfumed garden with its rich, major-key chords and adoring soprano solos, nicely floated by Ailish Tynan. Jiří Bělohlávek kept the piece moving and the textures relatively light, aided by the composer’s treble-rich scoring, though the challenging final note from the women of the BBC Symphony Chorus was a little strained.

Rather more substantial was one of Tchaikovsky’s final statements, the Third Piano Concerto, a single-movement span that works well as a whole. (It is possible to play the Andante and Finale, Opus 79, as completed by Sergei Taneyev, to make a three-movement work.) After the premiere it was Taneyev, the Concerto’s dedicatee, who complained of a lack of virtuosic opportunities. Those available were fully explored by Stephen Hough, in particular the weighty cadenza at the concerto’s core. That said, the darker hues of Tchaikovsky’s writing, and his wit, were left relatively unexpressed, and despite the occasional bout of nervous energy, the orchestral accompaniment was rather too smooth. 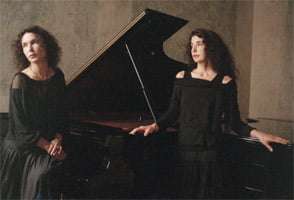 One piano became two after the first interval, the Labèque sisters performing their signature concerto. Katia took the lead as the most demonstrative pianist, several times threatening to fall off the stool, and the pair’s virtuosity carried all before them in the faster music. The bittersweet end to the first movement was well achieved and the second movement began airily. The finale fair raced away, the small but well-powered string section just about keeping pace as the pianists dazzled. As an encore the sisters sat at one piano for Polka by Adolfo Berio (1847-1942), Luciano Berio’s grandfather, thrown off with humour.

Elgar followed a second interval. In the South was composed by him after a holiday in Italy. Bělohlávek’s brisk tempos reflected the pace at which the piece was written. This unfortunately meant that the second theme lost its chance to really sing, but the tempo slowed appreciably for an elegiac viola solo from Norbert Blume. The brass was particularly well drilled in the faster passages, adding a satisfying rasp to the underside of the texture.

The colour projected onto the organ console then turned to turquoise for Brahms’s “Alto Rhapsody”, which rather clashed with Alice Coote’s vivid emerald dress. Her performance was dark of hue to begin with, the lower strings uncertainly crossing rhythms, yet as the responsive male chorus entered the mood slowly introduced consolation.

With peace finally achieved in the C major resolution, Bruckner’s celebratory Psalm setting, making secular concessions in its use of the German language and reluctance to use explicit word-painting, was the grand finale. Ailish Tynan confidently negotiated some tricky solos and Bělohlávek secured impressive clarity from the chorus (women and men) in the fugal passages. There was a magical quiet section on the repeat of “Let everything hath breath praise the Lord”, then it was down to the exultant final bars to complete an exuberant and entertaining First Night.