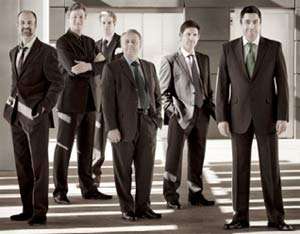 Any hesitation about hearing anything so soon after what may be the best concerto performance of this year’s Proms (Julia Fischer in Brahms’s Violin Concerto) and going straight back into the Royal Albert Hall, was dispelled as soon as six men, identically dressed in black velvet jackets and pale yellow ties, sang their distinctive harmony together.

Yes, this was The King’s Singers, the most recent six of nineteen who have, over four decades, ensured the lasting appeal of close harmony between two countertenors, a tenor, two baritones and a bass. There was a seventh of the 19 to start with, Brian Kay (a founding member back in 1968) who introduced this late-night prom for the BBC Radio 3 audience and then members of the group took it in turns to present the pieces with trademark gentle humour.

In an exquisitely programmed concert, there was music ranging from the Renaissance to the present, with stops particularly in the 19th- and 20th-centuries – including the opening selection of Poulenc’s witty “Chansons françaises” and various Victorian parlour songs “in the biggest Victorian parlour ever built.”

Whether all together or in slightly smaller combos of four or five voices (the non-required singers moving to stand at the back or side of the stage), The King’s Singers blend is pure and unique. For the Renaissance – here Lassus, Passereau and Janequin – they may not have an authentic sound, but the pure quality of the vocal balance is quite extraordinary. The King’s Singers had travelled back in time some 400 years (who needs Dr Who at the Proms?). Then followed an example of the many works the group has commissioned, John McCabe’s haunting evocation of American wastelands, “Scenes in America deserta”, based on the writings of architectural historian Reyner Banham. McCabe took his bow.

From the various animals, lovers and warriors essayed (Bridge’s “Goslings”, like Tristan and Isolde, only finding lasting love in death, in Bridge’s case on the dinner table), Janequin’s “La guerre” detailed a hard-won French victory with all the onomatopoeia of a comic-book super-hero, with the vocal equivalent of ‘biff’, ‘boff’, and ‘kapow’).

The evening ended with folksongs arranged by Gordon Langford and members of the group, Bob Chilcott (who left in 1997) and current baritone Philip Lawson. Langford’s “Widdicombe” Fair played to the group’s effortless resource of funny voices and genial comedy. The encore was Arthur Sullivan’s arrangement of “The Long Day Closes”, apposite for a concert finishing at fifteen minutes short of midnight and perfectly judged in this performance.