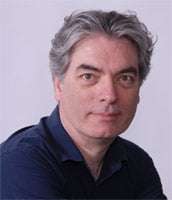 I once struck up a conversation with a fellow traveller on a train journey. It turned out that he was a composition pupil of Simon Holt. I recall him telling me that Holt would regularly cross out page after page of the fledgling composer’s scores and write one word across them: “waffle”.

I often think of this when listening to Holt’s music. His is a musical language singularly free of waffle – not on account of a Webernian concision of expression, rather because every musical idea has a burning, tactile immediacy that is then succeeded by another equally striking idea. ‘Development’, in the manner of sonata form or any of its 20th-century equivalents, is nowhere to be found in Holt’s music. In this sense he is a British composer in what one might call the Birtwistle tradition.

Now in his 50th-year, Simon Holt has been appointed Composer-in-Association to the BBC National Orchestra of Wales (not to be confused with its post of Resident Composer, presently occupied by Guto Pryderi Puw). Holt’s Troubled Light is the first of four works that he will write for BBCNOW. Whether they will form a cycle, in the manner of his Icarus triptych or his Emily Dickinson sequence a ribbon of time, remains to be seen. Certainly Troubled Light made a powerful impression in its own right.

Troubled Light is Goethe’s description of colour, revealed to Holt via Derek Jarman. The work is cast in five movements, of which the first four focus in various degrees of directness on particular colours and the extended fifth reworks material from the previous four – as if one had been viewing a series of Rothko panels and then stepped back to survey the whole exhibition from a distance, perhaps from some fantastical perspective in a Gehry-designed gallery. 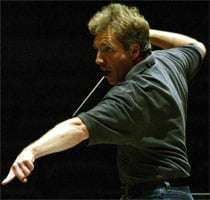 Opening is the fell of dark, after Gerald Manley Hopkins, which abruptly throws us into a world of black, a terrifying emanation from the depths of the orchestra. The eventual appearance of flutes and celesta register as flecks of silver and gold against the prevailing darkness; a strange, unsettling soundworld. The brief second movement, rudhira (the Sanskrit word for red) is described by the composer as “a flash of wild red”, which goes to show how subjective the experience of tone-colour is – I got bright yellow myself! Whatever the colour, rudhira is a propulsive burst of energy, the scherzo of the set.

The work of the American abstract painter Ellsworth Kelly was the inspiration for the third movement, being a literal recreation in sound of Kelly’s Yellow Relief with Black. The dominant musical image, an inert rotation of flutes and piccolo with occasional dry underpinning, has a starkly ‘experimental’ feel that reminded me of the late work of Morton Feldman. The fourth movement, Huye, luna, luna, luna after Lorca, is a moon-silver meditation for strings with interpolations from percussion and a pungent refrain for two harps. Gleaming thirds and, toward the end, quasi-Baroque figuration sounded like the pulverisation of something by Arvo Pärt, a composer I recall Holt raving about well before his later ubiquity.

It was a testament to the gestural immediacy of Holt’s musical images that one readily recognised the earlier elements in their new context in the final movement. This intense rumination more than succeeded in its purpose of drawing the various strands of the work together, only to vanish in a thoroughly unexpected evaporation.

Troubled Light is a masterly piece by a composer who seems with every new work to be an ever-more essential figure, as Simon Rattle has intimated, uniting two strands of British music, the primevalism of Birtwistle and the ecstatic lyricism of Tippett. Its impact was assisted in no small measure by the scrupulously realised launch it received from BBCNOW under its Principal Conductor Thierry Fischer.

Truth to tell, BBC Proms owed Holt a successful first performance. His previous two orchestral Proms commissions, Syrensong (1987) and Walking with the River’s Roar (1992), were to my clear recollection marred by unsympathetic conductors. Holt’s remarkable ear for sonority was matched at every turn by the subtlety and refinement that Fischer brought to bear on the score. The tangled knots of the second movement were revealed to the ear with perfect clarity. Yet when the piece raised its voice, there was weft and brute-force in spades.

That three-dimensional nature of Holt’s writing was also much in evidence at the pre-concert “Composer Portrait” presented at the Royal College of Music. Two works for solo clarinet, brief candles (2003) and a second box of brief candles (2006), had an almost holographic quality – it felt as if you could reach out and grasp the tiny individual movements with your hand. Their immense technical difficulties were not so much surmounted as apparently ignored by Stuart King, whose control of timbre was quite remarkable – I predict great things for him.

Scarcely less impressive was the performance of Two movements for string quartet (2001) performed by the Tippett Quartet. The atypically functional title of the work masks one of Holt’s finest achievements, a rare piece of contemporary music that does nothing remotely predictable and yet makes perfect sense on a first hearing.

As is customary with the Proms, the new work was set in a context that displayed it in the best possible way. Debussy’s Nocturnes are also studies in colour – to my ears grey, green/red and silver respectively – and were likewise treated to a performance of acute attentiveness to dynamics and rhythmic scansion. ‘Nuages’ was taken at a more purposeful pace than is usual, these clouds having a fair breeze behind them. ‘Fetes’ was supple and well articulated in its outer sections and the central processional was thrillingly realised. ‘Sirènes’ was sung most alluringly (and from memory) by the Nottinghamshire-based female chorus Cantamus. Debussy’s “orchestra without feet” swirled restlessly beneath them and I reflected, not for the first time, that his critical reputation as an indifferent orchestrator is thoroughly undeserved.

Ravel’s version of Mussorgsky’s ‘Pictures at an Exhibition’ was no less welcome for being an obvious pairing with the Holt. Where the first half of the concert had been about the elusive and the ambiguous, the radiant diatonic nature of the opening ‘Promenade’ tangibly snapped everything into focus. Again this was a performance where the terracing of dynamics and rhythmic articulation were paramount. Some passages of this deeply familiar music, such as the flourish at the end of ‘Gnomus’, seemed to make a kind of rhythmic sense that had apparently previously eluded me. Other stand-out moments included the exquisite shading of alto saxophone and the accompaniment in ‘Il vecchio castello’, the vertiginous muted trumpet of ‘Two Polish Jews’ and the riveting climax of ‘Bydlo’ as the cart passes close by (shades of Debussy’s ‘Fetes’!). The peroration of ‘The Great Gate of Kiev’ was quite overwhelming. A glorious concert!