The Winners of the BBC Radio 3 Awards for World Music

Winner of the Newcomer Award, Mayra Andrade was the first artist of the roster and gave a confident and self-assured set, performing songs which appear on her album, “Navega”, ably supported by her four-piece band. It would be hard to categorise Andrade’s music as solely Cape Verdean, sounding at times like the gutsy Brazilian singer, Alcione. The musicians, most of whom are Brazilian, provided accomplished support that would not have been out of place at a jazz-fusion gig.

I would have liked Andrade to give more free reign to her voice; I particularly enjoyed her attempted forays into what can only be likened to scat-like improvisations, and was pleasantly surprised by the earthy tones, and the slightly rougher edge to Andrade’s voice. She seems to be well on her way to becoming a seasoned performer, with a good rapport with am audience – it’s hard to believe she is only in her early 20s. She has so much more to give, with songs that touch on the issue of politics, love, and the elements of nature; an artist who sounds much better live than recorded. Although a traditional, West-African ‘rootsy’ sound coming would have been welcome, this performance was like being in a lush, tropical garden with a welcoming breeze. 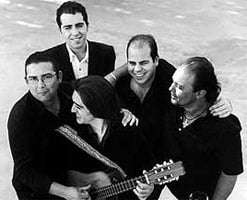 This 5-piece group is considered by many to be the genuine sound of southern Spain and once played support to Mayra Andrade. They began their set with what could be described as a call to ancient spirits – by one of the vocalists in a rough- hewn, world-weary voice – perhaps calling to the spirit of the late and highly esteemed flamenco guitarist, Diego Amaya Flores Del Gastor, or perhaps a call-to-arms with the urgency of a Spanish griot (storyteller). The audience was respectful. Then began the percussive hand-clapping and foot-stomping, and vocals, imploring the musicians to continue their journey. The level of musicianship displayed by Paul Rodriguez on Cuban Tres and Paco de Amparo on Spanish Guitar was unparalleled. This is a tight ensemble. The intensity of the dancing was electrifying – and the ensemble managed somehow to bring the magic of Andalucía to this corner of London. It was hot, sticky, and intense.

The Andalucían and Moorish strains were never lost, and reminded of Mark Ribot’s playing, Ribot for many years played guitar with Tom Waits. Was I imagining this? I could picture whirling dervishes, despite the members of the ensemble being dressed in Spartan black, so as not to distract the audience from the music. I enjoyed the interplay between the two guitarists who at times sounded discordant. Perhaps, the peak of the performance was Tarantos del Mellizo y Diego in which one of the dancers seemed to be in a frenzy, providing a dazzling display of technique. 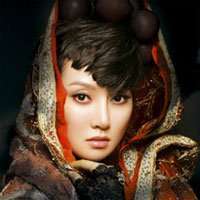 This much-vaunted singer followed the first interval and the weakest part of the evening. The first number would not have been out of place as the theme-tune for a Disney movie. Sa Ding Ding’s voice seemed to be quite thin, and was overpowered by the heavy drumming provided by her group. Carefully choreographed movements, costume changes, visual props, flashing lights and acrobatic dancers could not compensate for the lack of substance in the material, with a sometime Celtic element; unlike at the Womad festival the previous Sunday. It became quiet in the auditorium, then two males holding yellow flags burst in, one of them shouting. A protest? No, it was part of Sa Ding Ding’s set; the liveliest part of it! Another interval followed. 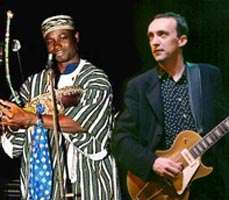 Justin Adams (guitar) and Juldeh Camara (ritti), joined by percussionist Dawson Miller (who looked as though he had just emerged from the Touareg), began their set with Nayo, my favourite song on their album “Soul Science”. They adapted it for the live set very well. At times the trio barely looked at each other, each seemingly confident of each other’s role. The lovely Celtic sounds emerging from the ritti, a string-instrument held similarly to a violin, though in the crook of Camara’s left-arm (as opposed to under a player’s chin), juxtaposed with the textures emerging Adams’s electric guitar and Miller’s percussion provided by Dawson Miller, and Camara’s voice were spellbindingly beautiful.

This trio produced such a full sound, and seemed to adapt to the venue very well; the lovely bluesy sound ever-present, evoking the Sahel region of Africa, as well as that of the Mississippi delta, and of the late Bo Diddley in particular. The audience hand-clapped the blues-infused songs, providing glimpses of an arid landscape – making me wonder what hardship and apparent barrenness could produce such beautiful and evocative music. 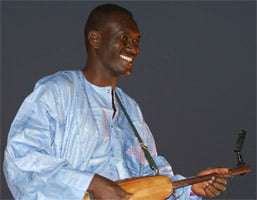 There was no let up in the heat, as Mary Ann Kennedy introduced Bassekou Kouyate, the final act of the evening, erroneously announcing that he had been the sideman of the late Toumani Diabate. Reports of Diabate’s death had been greatly exaggerated. Nevertheless, it was the highly regarded Malian traditional bluesman Ali Farka Toure whom Kouyate accompanied.

He and his group Ngoni Ba, assisted by his wife, the singer Ami Sacko, brought the house down. Not one modern instrument in sight; three musicians each played an ngoni (a string-instrument, considered to be a forerunner of the banjo), two percussionists, and Ami Sacko seemed to be teasing (and playing) with the audience, encouraging each other, clearly enjoying themselves, not fazed by the venue.

This is the fourth occasion I have seen this group perform this year, and each time the musicians have made the venue (however large or small) their own. Kouyate reminds of Chuck Berry, not least his trademark duck walk.

Kouyate’s phrasing on the ngoni reminded of the vocal inflections and style of the blues musician and singer, John Lee Hooker. On Poyi (Segue Blue) there were no words at all – but the meaning was clear – a mournful sound, a lamentation, an emotion to share. It was absolutely beautiful.

The dance routines were inspired, and uplifting. The ensemble was joined by Justin Adams, Robert Plant’s guitarist of choice, on an electric guitar surreal to look at alongside all the traditional instruments. It worked! Ami Sacko’s voice seemed to soar with the frenzied urgency of the music seemingly reaching the great heights of that other great Malian singer, Nahawa Doumbia.

It was a hot night!