Twentieth-century works of wildly differing musical languages were here linked together by the BBC Symphony Orchestra and its Principal Guest Conductor, David Robertson, making for an extremely interesting and stimulating evening of music.

The action began in the Arena, the Royal Albert Hall transformed into a modern-day amphitheatre to meet the demands of Iannis Xenakis. Nomos gamma, written “for 98 musicians distributed among the audience”, but bringing the soloists together in an unified picture of sound. The orchestra members were arranged in a star shape, with small triangular inserts for ten or so audience members each, themselves an unwitting part of the performance. While occasionally the position of the crowd impeded the sounds of individual players, this did not prevent the piece from making a powerful impact through its percussive impact and vibrant timbres.

In his finest music, Xenakis (1922-2001) seems to express the language of primitive civilisations through the instruments of the symphony orchestra, the one for Nomos gamma augmented by seven percussionists, each playing a variety of down-tuned tom-toms that echoed across the Arena, transforming it into a huge bowl of sound. Through his invention, and ear for architecture in sound, Xenakis memorably taxed trombones and contrabassoons to their lowest limit, piercing woodwind solos peeking through like sudden flashes of sunlight. And when the percussionists took over towards the close it was as if the very heavens had opened, the drums trading volleys of rhythm. 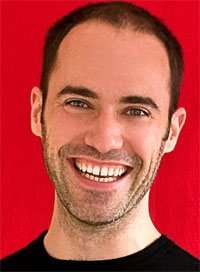 “Aïs”, with which the concert’s second half began, was more conventional in staging if not in its music. Although written for baritone, the settings of texts by Homer and Sappho make such demands on the voice that Leigh Melrose was frequently soaring above the orchestra in an amplified falsetto, deploying a range of techniques designed to keep his voice on the edge of expressive tension. Whether growling, barking or sighing, this was a performance putting into incisive context Xenakis’s vivid description of a journey into Hades.

Alongside Melrose was percussionist Colin Currie, less obviously extrovert but still highly virtuoso in his delivery of complex and syncopated rhythmic patterns, securing admirable definition in even the most taxing of passages. The orchestra itself pushed to dynamic limits, which was occasionally too much for even the amplified Melrose, but the moments where Currie and the two orchestral percussionists exchanged blows were memorably visual duels.

As a contrast David Robertson offered probing insights into Rachmaninov and Shostakovich, the sudden return to tonality a shock to the ears. Rachmaninov composed The Isle of the Dead in response to a black-and-white print of Arnold Böcklin’s masterpiece, the painting helpfully reproduced in the programme. Robertson was careful to understate the dynamic response particularly of the string ostinato, shaping the gradual progression of the boat towards the fateful island. When the first climactic point was reached the definition of the ostinato was momentarily lost, but Robertson held something in reserve, the quoting of the ‘Dies Irae’ truly cold.

Leaving the lightest-scored piece until last worked well; the comparatively frivolous beginning to Shostakovich’s Ninth Symphony tripped off the first violins and Rebecca Larsen’s delightfully mischievous piccolo. The winds and brasses were superb throughout, the clarinet duet in the second movement between Richard Hosford and Peter Davis poignantly realised, and Julie Price’s bassoon recitative in the Largo was particularly moving.

Robertson adopted brisk tempos throughout, yet there was a heightened tension in the slower passages – the stern brass interjections of the Largo and the icy flute solo with which the Moderato began. There was a distinctively sour taste to Shostakovich’s sweetly scored humour, even in the most exuberant passages of the finale, in which a barely concealed disquiet gnawed away at the most optimistic of melodies – a reminder of the composer’s precarious position in 1945 and his unsuspecting audience.