2010 marks the centenary of the composition of Sir Edward Elgar’s Violin Concerto written for and dedicated to Fritz Kreisler. The work has a prestigious recorded history, to which has been recently added the name of Tasmin Little who has spent a long time cultivating her interpretation and keen to talk about the story behind the piece… 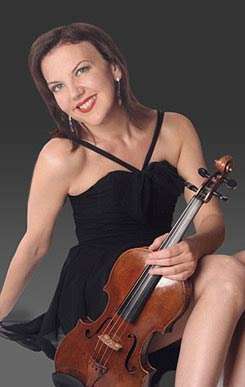 “I certainly feel passionately about the piece and like any mystery. Half the fun is having your own theory about what the music means”. One of the principal enigmas, if you like, is the meaning of the five dots Elgar leaves in the inscription of Aqui está encerrada el alma de ….., translated from the Spanish as Herein is enshrined the soul of ….. to which Tasmin contemplates that “many people have their theories, even that the five dots might be Elgar’s own name. I think the soul is feminine, though, so he is out of the equation, and so is Fritz Kreisler, so that leaves the women. The person I believe is the contender is Alice Stuart Wortley, his own special muse. Elgar often talked about the ‘Windflower’ themes, and the themes here are truly beautiful. He had a tremendous writer’s block when he was writing this piece, but once she urged him on he felt able to continue the concerto. He kept referring to it as ‘your concerto’, and he also wrote ‘you will be conducting it, wherever you are’.”

Little has recorded Elgar’s Violin Concerto for Chandos, with Sir Andrew Davis conducting the Royal Scottish National Orchestra. As an interesting bonus she sought to recreate the ‘cadenza accompagnata’, as performed by Marie Hall in the composer’s abridged recording of 1916. “It came about through somebody who knew of this cadenza and who let us know it had never been reproduced. It was Elgar’s own idea to use a harp here to overcome the difficulties, in trying to make the special texture heard. The strings are asked to do a delicate effect called thrumming, so Elgar asks for three or four figures softly over the strings. That effect on a crackly recording would be totally lost, so he used a harp to enhance the strings, and wrote the part out for the harp. We listened to the original, and recreated it along with Gwawr Owen, a friend who is a harpist, and also with a record producer. We managed to write it down, but it was quite a complicated process!”


Given the concerto’s recorded history, she admits to approaching a new taping of the work with great care. “I really wanted to feel in the right place to put down what could be considered my version. After all, this is what people will consider to be your representative version. Having said that, even more than I had thought and hoped, this is exactly what I wanted. It’s my thoughts on the piece. It was the right time to record it, and I feel what I did is extremely valid”.

She has already recorded Elgar’s Violin Sonata, with Martin Roscoe, and the Delius Sonatas with Piers Lane, and feels these ventures have helped place the concerto in context. “I think it all helps when you have experience of a certain delicacy and nuance. There is a lot of that in the Cello Concerto, which is not at all like the bombastic works. It is tinged with a huge amount of intimacy, regret and worry – a real war piece. It finds Elgar concerned about death, and in it he is searching for something – peace and tranquillity. In the Violin Concerto there is a similar journey I think, more than in any other of his works. If you like the Sonata, it is a good way to come in to it”.

The recording represents a return to a conventional record-company release for Tasmin Little, whose album The Naked Violin was made available for download from her website. This led to a heightened interest in her work. “I think there has been a huge amount of interest from people who wouldn’t normally come to classical music. I was bowled over by the response, from people of all ages and nationalities. I think as a format the release of the download has given classical music a huge presence on the Internet. The download of The Naked Violin is still there, and from my own point of view it has spawned all the community work that I do, taking music to people who do not know it. It’s saying to people ‘please experience live music’ if you get the opportunity. I do think a recording is a wonderful thing, especially if you live in the middle of nowhere, but the entertainment of a live performance is something you should experience if you can.”

Has this set a blueprint for future releases? “I absolutely want to make things available on the Internet, but what I did for the Partners in Time CD release last year (on BIS) was make a dedicated website, with an enormous amount of music for free, and spoken introductions”. In today’s climate Tasmin reasons that these features are ever more valuable. “It’s a marvellous thing to have when people are considering what they spend. If the opportunity is there to listen I absolutely believe people like to do that, like the old listening booths”.

Before long, with conversation flowing freely, we are talking about the Elgar again. Tasmin feels it was something of a destiny for her to record the work. “Absolutely. I could have recorded it a lot earlier in my career, and I had a lot of invites that I politely declined because I didn’t feel ready. I have always felt you need an innate understanding of the piece before you record it, and having loved it for a long time I think also the experience of life is necessary, to really adequately bring out the fine nuances and nostalgic feelings of the piece, the yearning. You can’t bring it out in your 20s, so you have to live life first. It’s a piece so special to me that I didn’t want to record it under any circumstances”.


Her accomplice could hardly have greater Elgarian credentials – the icing on the cake. “In Sir Andrew Davis I’ve got a conductor and musical partner with a wealth and experience of English music. I really knew he and I would coincide a lot on our feelings about the concerto. We didn’t have a pattern drawn out of our pockets readymade, and that was a delight, because it came together as a blend and partnership of ideas. It feels very special what we have created together”.