As the 50th-anniversary production of West Side Story prepares to open at Sadler’s Wells, Michael Darvell traces the history of this eternally popular musical… 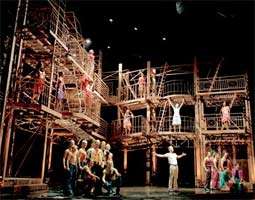 When West Side Story opened at the Winter Garden Theatre in New York on 26 September 1957, nobody then knew how successful it would eventually become. It had toured out of town for a while and had been popular in Washington. On the other hand it bombed in Philadelphia. The Broadway reviews were mixed, although most said that a new form of musical entertainment had been born that was far from being a so-called ‘musical comedy’ but instead one that dealt with problems of everyday life such as gang culture, a subject significant in the UK at present.

On Broadway West Side Story ran for a respectable 700 or so performances, which in itself was no great success story. It was not until the show hit London the following year that it really took off and played well over 1,000 performances. Although the initial production was revived on Broadway for a while, it never reached the figures that it held in London.

Next year, 2009, the idea of West Side Story will be 60 years old. Director and choreographer Jerome Robbins, who had collaborated with Leonard Bernstein on the ballet Fancy Free, which they then developed into the musical On the Town, was approached in 1949 by actor Montgomery Clift about staging the story of Romeo and Juliet in a new way. The idea of turning the warring families in Verona into a family feud among teenage gangs of New York appealed to Robbins.

He met with Bernstein and playwright Arthur Laurents (who turns 90 in July 2008). The three of them planned a work that would combine drama, music and dance to carry the story through. Thus West Side Story was born and the American musical was never the same again. In its own way it was just as influential as the advent of Jerome Kern and Oscar Hammerstein II’s Show Boat, Rodgers and Hammerstein’s Oklahoma! or Galt MacDermot’s Hair. In each case the creators re-wrote the rules for how to stage musical theatre.

After the initial idea was mooted, West Side Story had to wait five years before work could begin on it in earnest. Then it took two years to prepare the show for Broadway. During that period Bernstein took time out to work on Candide. He was working on the two shows concurrently, which is how some of the music for Candide appeared in West Side Story and vice versa.

Having written the music and, along with many others, some of the lyrics for Candide, Bernstein also wanted to do the same for West Side Story but realised that the new project was so big he would not have the time to do both. By then Laurents had brought in Stephen Sondheim to be the lyricist. He didn’t actually want the job because he felt he was basically a composer but his mentor Oscar Hammerstein encouraged him to take it for the good experience. While Bernstein was occupied with Candide, Robbins was involved in directing Bells are Ringing, Laurents was working on a new play and Sondheim was engaged on a television project called The Last Word.

Initially Robbins had the idea of making the family feud one between the Catholics and the Jews, or the Irish and the Jews, but that seemed a little out of date, and with the post-war influx of Puerto Ricans into New York, this seemed more timely. Originally it was to have been called East Side Story, then it became Gang Way and finally West Side Story. Work was slow at first and it seemed as if it would never come-together until they hit on the idea of basing it around a gang war.

Then, as they began readying the show for rehearsals, the main backer pulled out. A chance phone call to Sondheim from director Harold Prince set in motion the raising of the necessary $300,000 to get the show back on the road. West Side Story was back in business but casting was the next problem, finding dancers who act and sing. Robbins was a hard taskmaster who always sought perfection and rehearsals were really painful for the young and inexperienced cast, but his strict methods finally paid off.

The show finally reached Broadway after out of town tryouts. It made the names of Chita Rivera, Larry Kert, Carol Lawrence and Mickey Calin (later Michael Callan) and brought a new young audience into the theatre. Its initial production may not have made as much money as it could have, but it subsequently cleaned up everywhere. At the Tony Awards only Robbins’s choreography won an award but when the subsequent film was made with Natalie Wood, Richard Beymer, Russ Tamblyn and Rita Moreno (but without Marlon Brando who was desperate to do it) it won eleven Oscars including Best Picture.


The Bernstein-Sondheim songs from West Side Story have gone into musical theatre history as classics that are as fresh now as they were 50 years ago. Just think of ‘Something’s coming’, ‘Maria’, ‘Tonight’, ‘America’, ‘One hand, one heart’, ‘I feel pretty’, ‘Somewhere’: they just don’t write songs like that any more.