Prokofiev
Symphony No.1 in D, Op.25 (Classical)
The Love for Three Oranges, Op.33 – March & Scherzo
Glinka
Kamarinskaya
A Life for the Tsar – Overture
Borodin
In the Steppes of Central Asia


Joan Sutherland: The Art of the Prima Donna, Volumes 1 & 2

Recorded in July and August 1961 at Kingsway Hall, London

Since the beginning of recording, companies have been looking for techniques that will produce superior sound, and what is termed direct-to-disc has a reasonably long pedigree. The principle is fairly simple; you eliminate the master-tape and cut the performance direct to the lacquer. There still has to be a mixing desk, so that the output can be set to a level that the cutting head can cope with, and which does not produce distortion and/or mistracking when played. It will be necessary to produce test lacquers (gashes), which can be played, until the recording/mastering team is satisfied with the results, and then the performance can be recorded, without any form of editing. The lacquers then go to the pressing plant (according to its website, Berliner Meister sent three of side A, and two of side B), where the masters, mothers and stampers are produced as per normal. Berliner write the number of every disc derived from each stamper on the record sleeve (the review copy is 462 from stamper 3), and according to the Producer, Rainer Maillard, the pressing company produce 1000 discs per stamper. The stamper number is shown on the run-off, using the format P1 et cetera. Bearing in mind that you can produce a significant number of mothers and stampers from a master, without any deterioration in sound, tens of thousands of LPs can be cut from one master. 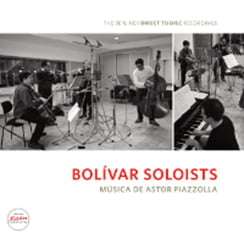 One could be forgiven for thinking – given the name – that the performers are a product of El Sistema, but only two are Venezuelan, and Rhodri Clarke is Welsh; they do however specialise in Southern and Central American music. The sessions were given in front of a small audience, who applaud after every number, and as there is no editing, between-items tuning can still be heard. The performances are very persuasive, but more old-school tempos and rhythmic variation, rubato, and some judicious portamento would not have gone amiss (you do wonder what a group of jazz musicians might have done with this hugely enjoyable, accessible music).

The sound is very good. Overall balance is reasonably middle-distance, there is a sense of space around the image, and being analogue, the instruments sound real. Berliner is also to be congratulated on using what feels like 140g as opposed to unnecessarily heavy 180g vinyl. However, it does not have the richness and presence found on the finest analogue recordings, and one suspects that a larger dynamic range could have been accommodated. It is also unfortunate that the presentation contains pictures of the performers, and an unnecessarily long list of the recording staff and equipment used, as opposed to programme notes. Nevertheless, it is always a pleasure to hear new vinyl, and one can only hope that Berliner sells enough to make the label financially viable. 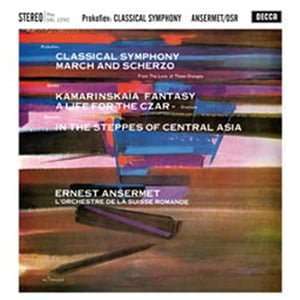 Decca’s SXL2000 LPs are seriously collectable, and those by Ernest Ansermet and the Suisse Romande Orchestra have acquired iconic status. Much of this is down to the sound, and stunning covers, as opposed to artistic merit, but many audiophiles and label collectors are not that interested in the latter, hence the steady flow of Ansermet discs from Speakers Corner.

The two featured discs illustrate everything that was wrong with Ansermet’s conducting. Prokofiev’s ‘Classical’ Symphony plods along, the ‘March’ and ‘Scherzo’ are flabby, A Life For the Tsar’s Overture needs greater attack, and the playing is decidedly provincial. Only In the Steppes of Central Asia receives a performance that is up to international standard, and even this – for all its flow and expressiveness – has been done better. Stravinsky’s two masterworks from 1940 (in C) and 1945 need better orchestral playing (the woodwinds are beautifully captured by the Decca recording team, which shows-up their thin tone and bland phrasing) and a conductor who can combine drive, elegance, rhythmic pointing and variety, and complete control of dynamic and expressive variation, which, alas, is not Ernest Ansermet. You only have to turn to Gennadi Rozhdestvensky and the Moscow Radio Symphony Orchestra in the Prokofiev pieces or Constantin Silvestri and the Philharmonia Orchestra in Symphony In Three Movements (yours on a 1961 first-label HMV ASD White & Gold LP for about £200.00 – if you can ever find one – or a very fine Classics for Pleasure transfer, for 50p to £1.00, available from many charity and second-hand shops!) to hear how great artists can bring these works to life. 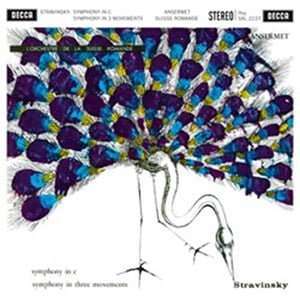 Decca’s sound is in a different class on both discs. The image is exceptionally large, having depth and width without any loss of focus, the orchestra is placed at the exact rear of the speakers, and there is no excessive reverberation. Analogue sound is immeasurably superior to digital (and especially low resolution 16bit files) in its ability to capture instrumental timbre, so the wind section is brought vividly to life (warts and all) and the horns in particular have vibrancy. The massed strings have exceptional presence, but there is a slight lack of body in exposed high violin passages and the double basses sound tubby on SXL 2292 (but not 2237, where the lower bass is far more controlled). As always on Decca recordings the timpani are alarmingly, thrillingly realistic – you hear the sticks hit the skins – and forte passages have weight, projection and power, with each section of the orchestra clearly audible. In an ideal world there would be greater dynamic contrast but this is a small price to pay for what remains exceptionally truthful ‘walk-in’ sound. Second label, wideband pressings were used for comparison. The Speakers Corner LPs have more vibrancy and impact, are considerably cheaper, and much easier to acquire. 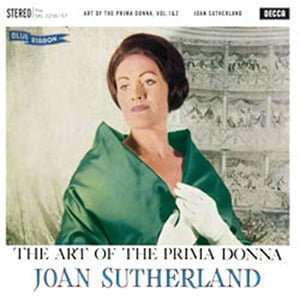 In 1959 Joan Sutherland had triumphed at Covent Garden in Donizetti’s Lucia di Lammermoor, and completely changed the face of coloratura singing. Maria Callas had invested a small number of such roles with a depth and insight that was completely beyond tweeting songbirds such as Tetrazzini and Galli-Curci, but it was Sutherland who would combine astonishing technical facility with – uniquely – a voice that could effortlessly ride and dominate an orchestra, which brought the soubriquet and accolade “La Stupenda” (Callas was “La Divina”).

Whichever piece you listen to you will not hear a screech, hoot, aspirate, forced high, or shaky low note, uneven trill, insecure intonation, or break in the registers. It is all quite effortless, right up to a gleaming E flat. There are tracks you do not associate with the singer, such as the Mozart, and the ‘Willow Song’ from Verdi’s Otello (unacceptably shorn of its prelude and postlude) and the voice has an appealing freshness that it would inevitably lose as it grew even heavier. On the minus side, there is no great depth to the characterisation, and even in 1960, many of the vowels were occluded. In the Covent Garden Lucia – under the great Tulio Serafin – Sutherland’s diction was immaculate, so you do wonder how much of this was down to laziness, the influence of her husband Richard Bonynge, and the indulgence of the somewhat less-than-great Francesco Molinari-Pradelli. Nevertheless, in terms of sheer technical mastery, the singing is phenomenal.

Decca made some classic recordings at Kingsway Hall, but in terms of sound, this is not one of them. First label discs were used for comparison, and both have a limited dynamic range, recessed balance (but less so on the re-mastering) mid-range congestion, and Sutherland and the chorus appear to be floating (Decca tried to create an opera house ambience, and used the Hall’s stage to house them above and behind the orchestra) and tbe latter’s detail in climaxes is not brilliant on either. On the re-mastering there are also examples of echo on side four that are not present on the originals, so one presumes that the master-tapes were damaged, and there also appears to be slightly more reverberation, which is odd. However Sutherland’s voice is fuller on the Speakers Corner discs and – as ever – supplies of the first and second labels, and the Ace of Diamonds mid-price reissues (which sound excellent) are scarce.

In terms of presentation, the originals were issued as separate discs, whereas the Speakers Corner ones are housed in a single thick sleeve, thus denying buyers the chance to choose between them, and there is little or no discount in price, which seems rather niggardly. Also, the Speakers Corner website, and the insert that came with the discs, state that Michael Bremner and Ray Minshull produced the recordings, whereas in fact, James Walker produced the stereo tapes, and thy did the mono ones. 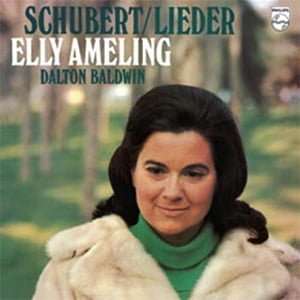 Elly Ameling was another soprano with a well-nigh-perfect technique. Born in Rotterdam in 1933, she possessed a beautifully honed lyric voice that was equally at home in Bach, Frank Martin or Hugo Wolf. Every note and word is given due weight and expression, nothing is exaggerated, the middle of the voice has (for its type) unusual richness, vibrancy, and a surprising array of colour. Whichever song one listens to there is an acute response to the text, and Ameling completely avoids sounding monochrome or facile. Only one, Nacht und Träume, doesn’t suit the voice, needing to be more sinister, with the sense of fear that its greatest interpreters, as Janet Baker with Geoffrey Parsons so memorably conveyed on their 1981 HMV LP of Schubert songs (ASD 4054). She is fortunate to be partnered by Dalton Baldwin, one of the great accompanists. Together they offer an object lesson in the art of Schubert Lieder interpretation.

The sound is unusual. Dalton Baldwin is captured beautifully, his luminous tone, superb dynamic shading and rubato are effortlessly realised in a slightly reverberant acoustic. Elly Ameling though seems to be floating above the piano in a church-like space, which – like the similar, but less pronounced effect on the Sutherland discs – is disconcerting. Not having a copy of the original it has not been possible to make comparisons, but while the Emil Berliner Studios might have for some unknown reason added reverb, it seems likely, given its selective nature, that all or most of it derives from the master-tapes, which is a pity. If Philips had kept the same acoustic for both artists they would have had absolutely marvellous sound.