Kenneth Carter talks to Hélène Grimaud about her latest Deutsche Grammophon recording, which is devoted to the music of Johann Sebastian Bach… 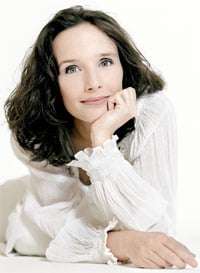 I met Hélène Grimaud on 14 November 2008 in the bar of a London hotel and talked to her about her new release. The CD’s cover bears the monolithic title “Bach”. It is Hélène’s first recording of this composer, a celebration of Johann Sebastian Bach’s enduring musical presence – 4 Preludes and Fugues, 3 transcriptions, and the D minor Concerto (BWV1052). Alongside the concerto, Busoni’s arrangement of the great Chaconne from the D minor Partita for unaccompanied violin stands as a centrepiece. Also included are transcriptions by Liszt and Rachmaninov. The accompanying booklet contains Grimaud’s deeply thought-through and illuminating account of how she experiences Bach. It is essential reading.

The genesis of this disc lies with the Chaconne. “I’ve lived with [it] for twenty years … and, OK, the C sharp minor Prelude and Fugue as well. The first reason why I wanted to go with the transcription was to juxtapose it with the purity of the suites and partitas for clavier.” She was especially keen to include the D minor Concerto since it was Bach’s own transcription, one of many, showing he had no objection to using his music in different ways. She then looked around for other transcriptions, choosing those of Liszt and Rachmaninov. “I was fascinated by what makes Bach’s music so universal” – by what makes it “so magical” that it “travels so well in so many directions”. It is music “with an essence that makes it independent from the people that made it.”

Also, she was concerned to present Bach’s music as an experience of an infinity of emotions – to move away from placing Bach “on a pedestal” as a figure of perfection and rationality, from presenting him primarily as someone “mathematically inspired”. I mentioned that I had recently written of Simone Dinnerstein as “reclaiming Bach for humanity”. This applies to you, too, I declared. Hélène accepts my compliment gravely, with grace.

Grimaud also spoke of playing the Italian Concerto on the harpsichord – discovering “something I hadn’t realised before”. Usually, she says, expression is “between the notes, not on the notes”. In interpreting Bach, however, expression is “on the notes”. The variations of tonal colour possible on a modern piano gets in the way of reaching Bach’s essence. It is “counter-productive.” On the other hand, Bach was so interested in the mechanics of the organs of his day – and ways of improving them – that it is inconceivable that, presented with a modern instrument, he would have said ‘No way’.

Bach is versatile – a person of so many different aspects, with music capable of performance in so many different forms. His musical experiments on the organ are extraordinary. The scope of his inspiration was huge. The modern custom of playing him with small forces misunderstands his intention – he used small choirs through lack of money, not through choice. Further, Bach was “a man of flesh”, Hélène declares. His music is “a celebration of what is there. He was not afraid to get his hands dirty”.

We talk about Bach’s enormous emotional scope. I contrasted two items on the CD – Hélène’s very tender Prelude and Fugue in C sharp minor (from Book I of The Well-Tempered Clavier) and her violent, turbulent Prelude and Fugue in A minor from Book II. “His different languages are incredible and often the different languages are fighting. He can be serene, but also quite mad.”

We refer back to the Chaconne, which, in the booklet, Hélène likens to a huge cathedral with stained-glass windows vividly illuminated one by one as the light pours through. When you hear some of his music being performed in the churches for which it was written, you can hear the madness – ‘a spirit unleashed’, I suggest. She nods emphatically. 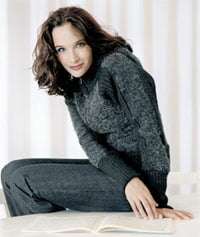 Then she mentions recent discoveries concerning the Parthenon’s construction. To look at the structures give the illusion of strict form and balance. In fact, the building has all sorts of irregularities; there is “nothing straight and nothing measured. With the naked eye, you just can’t discern it.” Bach is like this, she declares. Some of the music is actually quite free. There are some kinds of supports, “but the essence of this music is to be quite open. Bach is much more elastic than we think.”

I suggest a similarity with Chopin here. Grimaud assents, adding that Bach was working in this way “much more at the micro level” as part of his “cellular construction”, whereas Chopin’s structural gaps have decorative in-fill only.

Hélène move to the overall effect Bach has on her – to the wholeness of the experience. This is music of “solitude”, a “companion” – but it’s also “the music of community”. It is music that connects you to others, to people. “You can wake in the morning and feel like dust, like nothing, so insignificant, so minuscule. This music gives you the feeling of something larger than yourself, the feeling of belonging. It is an island – free and unwavering in the midst of currents and undercurrents.” She stressed the freedom. It is also protective, I suggest. In a way, she replies – but it “leaves all the possibilities open”. The music is “not restrictive in its protection.” Leaving you free to receive its protection? She nods.

I speak of the numerous striking phrases in her booklet note. We dwelt on an impasse. It is difficult to speak about music. What can you say? Words are inadequate. “It always seems a bit futile to try and pin it down. If you could really successfully speak about the music, then you wouldn’t play it.” Bach is timeless. “He is part of an eternal process of becoming. He doesn’t belong to us and never did.” Thus his genius is still on a journey. His juxtapositions are quite extraordinary. “I expected to find that the transcriptions were larger than the originals.” This is not so. “The originals are a feature of the universe in themselves.” They have a different sound image and spatial quality. Bach’s originals are “more elastic than the transcriptions”.

What has Grimaud learned from recording this Bach disc? She feels enriched. Her experience of Bach had led her to play the music of other composers differently. There is something wonderful and joyous about him. Yet Bach demands solitude, so that one may be in touch with the incommunicable. While she loves the thrill and urgency of playing in public, there is something so serious and intensely personal in Bach that she feels strongly inclined to withdraw. She suspects that Glenn Gould’s famed seclusion had much to do with the privacy necessary for his “serious and sensitive” search for Bach. After playing Bach “I feel I have to learn again how to function in a normal context.” A ‘normal context’ now intercedes our conversation … a taxi awaits Hélène!