Douglas Cooksey travels to Spoleto to discover a Mahler connection, a noteworthy new orchestra and a miniature La Scala… 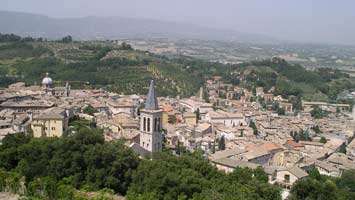 Spoleto and Mahler have been inextricably entwined since the sculptress Anna Mahler, the composer’s daughter, made her home there in 1968. Now Marina Mahler, daughter of the conductor Anatole Fistoulari and grand-daughter of the composer, has continued that association by making it her main home and by her imaginatively subtle transformation of one of the town’s most vibrantly beautiful homes (a small palazzo dating back to the 14th-century) into an oasis of deep calm amidst Spoleto’s bustle. One imagines too that Spoleto’s fantastic mountain vistas would have resonated deeply with Mahler who so loved Toblach and the Austrian Alps.

Following the Second Bamberg Symphony Orchestra Gustav Mahler Conducting Competition (which took place in the Spring of 2007) and included Yoel Gamzou amongst the prize-winners (he’s even younger than the previous Winner, Gustavo Dudamel), Marina Mahler agreed to become Honorary President of the International Mahler Orchestra, an ensemble created by Gamzou. This orchestra is good news. How many aspiring musicians not yet 20 have even conducted an orchestra, let alone actually succeeded in creating one and giving concerts all over Europe? This is an extraordinary achievement. 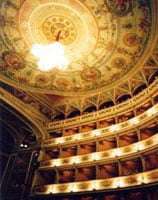 Having sat in on rehearsals for the Spoleto concert, what was equally remarkable is the sheer camaraderie and esprit between these young players, drawn from France, Germany, the UK, USA, Italy, Spain, Israel, Egypt, Bulgaria, Romania and Venezuela. It would be unreasonable to expect so disparate a group of players at the outset of their careers – even when the IMO is centred on core players and comes together for several weeks a year – to produce the sheer polish of the best full-time orchestras, but in this band there is a compensating energy, a passion for music and a collective determination to get to grips with the work in hand which frequently eludes more established groups. Necessarily run on a shoestring with members making considerable sacrifices to take part – including 20-hour car-journeys across Europe with the harp or living in a monastery without hot water – there is a joie de vivre about their playing which takes us back to music’s essential communal purpose.

The mediaeval town of Spoleto, now a World Heritage site, is an ideal location in which to bond and work. Far from metropolitan pressures, it nonetheless possesses one of those gems of an opera house, Teatro Nuovo, which seem to abound in Italy, a beautifully appointed, ‘miniature’ La Scala seating about 800 people. Following a disastrous fire, Teatro Nuovo, was re-built at the behest of the 19th-century Marchese Filippo Marignoli (who donated both the land and also contributed the majority of the finance, and whose current descendants very graciously hosted a fabulous reception for the IMO in a room reminiscent of the famous ballroom scene in Visconti’s “The Leopard”). It has recently undergone substantial restoration). 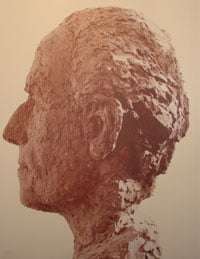 Teatro Nuovo’s rehearsal rooms and its theatre were the location for the concert that was held at the invitation of the Commune of Spoleto. The IMO’s visit also coincided with the presentation to the town of Spoleto of a very beautiful Bronze bust of Mahler by his late daughter Anna. This is one of only five copies. The others are to be found in the Amsterdam Concertgebouw, the Disney Hall in Los Angeles, the Vienna Staatsoper (if not until the Spring of 2008) and the Mediatèque Mahler in Paris. Its unveiling at the Spoleto concert celebrated not only the completion of Teatro Nuovo’s resplendent restoration but also the long-standing relationships between the town and the Marignoli and Mahler families, as well as the budding association between the IMO and Spoleto which it is hoped will extend to an annual residency. The theatre was gratifyingly full.

The concert itself, given on 1 October 2007, comprised a demanding but interestingly constructed programme. Opening with Samuel Barber’s Canzonetta for Oboe and Strings, his final work started in 1978 and originally intended as the central movement of an oboe concerto for Harold Gomberg, then principal of the New York Philharmonic. Canzonetta received its premiere in 1981 after Barber’s death. This is lambently beautiful music, elegiac in tone, and it received an unforgettably moving performance from the Venezuelan Hernando Escobar, formerly of Dudamel’s Simón Bolívar Youth Orchestra. Escobar is now resident in Berlin and is a beaming outsize personality with the ability to touch everything he plays with magic. (These is a further Spoleto connection since Barber was the partner of Menotti, a force behind Spoleto’s annual Festival of the Two Worlds.) 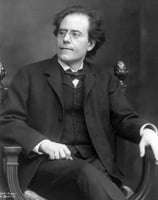 Mozart’s Violin Concerto in A (K219) was excellently played with real personality by the French-born Célia Schann, previously a member of the orchestra, and was notable for its use of the extensive Joachim cadenzas.

The Mahler association then came to the fore with the Adagietto from the Fifth symphony in a subtly impassioned performance (with the unveiled bust of Mahler looking on from the edge of the stage). This succeeded in avoiding the mawkish lucubration to which this music is frequently subjected and yet reached its emotional core, giving it full weight and intensity despite the modest numbers of personnel and which included some notably sophisticated harp-playing from Marianne Eva Lecler. Especially noticeable was Gamzou’s ability, remarkable in so young a conductor, to render the bar-lines as completely unimportant, to precisely locate the music’s significant moments and give them full force and yet also to hold the sound on the finest thread when necessary; these same musical characteristics were frequently in evidence from Gamzou’s main mentor, Carlo Maria Giulini. (Gamzou will conduct the Fifth Symphony complete with the IMO in Berlin in June 2008.)

Finally, Mahler’s transcription of Beethoven’s ‘Serioso’ String Quartet (Opus 95). This was a particularly courageous choice since it makes serious demands on a string quartet let alone a string orchestra but it was a choice well made since the work is quasi-symphonic in its force and dramatic scale. The IMO’s impassioned reading performed a valuable service in allowing us to hear this all-too-rare version.