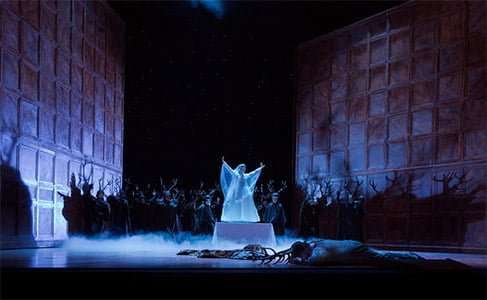 Giuseppe Verdi, whose bicentenary has fallen this year. Falstaff is significant in a number of ways: it was a rare comic outing for the composer, his second consecutive collaboration with librettist Arrigo Boito and the fruit (along with Otello) of a Shakespearean Indian summer. It is also his final opera and, in the opinion of many, his crowning masterpiece.

This is not the Falstaff of Henry IV but of Shakespeare’s later comedy, The Merry Wives of Windsor. At the Garter Inn we find the Fat Knight hatching a cack-handed plot to woo two wealthy married women, Alice Ford and Margaret Page. He writes an identical letter to each.

As luck would have it, the women compare notes (literally) and make plans of their own to humiliate Falstaff for his shamelessness. To do this they need to lure him to Alice’s house at a time when her husband is not present. Ford himself learns half the tale and mistakenly fears that he is being cuckolded, so he plans his own brand of revenge upon the old man…

The tale rushes pell-mell towards an inevitable if surprisingly clear-eyed conclusion at Herne’s Oak in Windsor Park, a finale whose theatrical virtuosity is as much a tribute to Boito and Verdi’s expertise as to Shakespeare’s genius. Some fascinating secondary characters salt the stew, among them Falstaff’s turncoat henchmen, Bardolfo and Pistola, the lascivious old Dr Caius and a pair of young lovers, Nanetta and Fenton, the latter of whom gets to sing the opera’s most memorable aria. 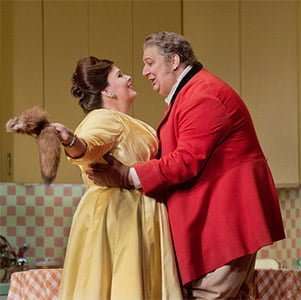 …That aria, ‘Dal labbro il canto estasiato vola’, occurs in the final Act and it’s a doozy for a high tenor. But the opera as a whole is packed with vocal delights, not least for Falstaff himself as he descends from the glee of ‘Va, vecchio John’ in Act Two to the extended third-Act scena of self-pity with which he bewails his comeuppance. Above all, Falstaff is an opera of great light and only a little shade that is distinguished by the eighty-year-old Verdi’s supple yet filigree orchestration.

Ambrogio Maestri, the leading Falstaff of our day, brings to the Met the performance that won him such acclaim when Robert Carsen first staged this richly entertaining production at London’s Royal Opera House. Angela Meade and Franco Vassallo are the Fords, Stephanie Blythe the redoubtable Mistress Quickly (a true contralto role) and Lisette Oropesa and Paolo Fanale play the young lovers. The Met’s Music Director, James Levine, conducts. Oh, one last thing: expect a horse. A real one!

The third performance of Falstaff will be broadcast globally, live in HD, on Saturday 14 December, with a further seven performances to follow over the festive season. Packed with incident, fun and blissful music, it is the perfect comic opera. Not to be missed.