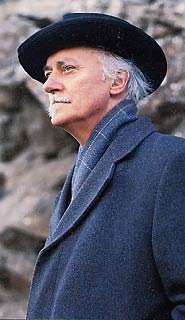 The Scottish composer, pianist, teacher and pedagogue Ronald Stevenson celebrated his 80th-birthday on 6 March, and to mark the event an entire weekend of concerts devoted to his music, including music by composers that Stevenson particularly admires or have influenced him, was held over three days under the artistic direction of Murray McLachlan. I was in attendance for the first two days and my colleague Richard Whitehouse for the third.

The composer himself was present to acknowledge this exceptional celebration of his art. Almost forty musicians took part, and the weekend kicked off with a rare complete performance of Stevenson’s large-scale song-cycle “Songs of Innocence”, settings of various Blake poems composed between 1945 and 1965. This extraordinary anthology was performed by The Artsong Collective, four solo singers (soprano Moira Harris, contralto Phillida Bannister, tenor Wills Morgan and baritone Paul Keohone) with pianist Richard Black.

It is impossible to appreciate this work fully after a single hearing, the more so as none of the texts was printed in the programme, but in terms of grateful word-setting and fully-appropriate piano accompaniments, every one of the settings is complete in itself with regard to mood – this was no ‘by-the-yard’ music – and, as the cycle progressed, moved inexorably towards the final four-part a cappella ‘On Another’s Sorrow’. Unfortunately, the four singers of The Artsong Collective were none-too-well matched in ability; it transpired that Phillida Bannister was suffering from an infection – and didn’t appear the following day – and of the other three singers, only Paul Keohone could be said to be the most communicative, in tune and vocally assured. None the less, even within these drawbacks, it was clear that Stevenson is a natural song composer, one who never places unnatural demands on the voice, and with over 250 songs to his credit, has clearly written a substantial body of work which should be far better known. 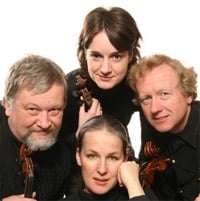 The second concert brought the Martinů String Quartet Janáček’s Quartet No.2 (Intimate Letters) and Stevenson’s ‘Voces Vagabundae’ (1989). The Janáček was particularly convincingly played, a really fine performance, which comment could surely be applied to Stevenson’s work, a piece of considerable inventive skill and expressive intent, to the extent that one began to wonder if it were not in fact a conflation of two separate works – the first two movements and the concluding two forming distinct halves of a bipartite work – ending with a succession of Scottish dances before a final group of contrapuntal dances ends the work in a jubilantly-fashioned whirl. Why this impressive work remains neglected is a mystery – it is significant that it needed a European-based ensemble to bring it to London.


The third concert, beginning at 10 p.m., opened with an attractive work by Savourna Stevenson, a movement from her Quintet for harp and string quartet (the Martinů String Quartet again) in which the composer herself played the main folk-based material on which it is based. This was followed by a very fine account of Stevenson’s relatively well-known Peter Grimes Fantasy for solo piano, an extraordinary recreation of those 19th-century fantasias on popular operas with which many astrakhan-collared virtuosos of the period used to bring their audiences to their feet, and which earned the justified admiration of Britten himself. The excellent pianist was Marie-Louise Taylor, who played the work from memory; one’s only criticism of the piece is that it is somewhat short for the material; not that it is in the potpourri class, but one wished for a greater development of some of the ideas – perhaps a solo piano version of the ‘Passacaglia’ from that work would be a suitable follow-up. Joseph Long then gave the London premiere of a Piano Sonata composed in 1958 by Ronald Center (1913-73), of which Stevenson himself had given the world premiere in Aberdeen in 1979. It is an exceptionally fine piece, the language of which certainly betokens its mid-century date, and which held the attention throughout in what appeared to be an excellent and thoroughly committed performance. Finally, Long played two shorter Stevenson pieces for solo piano, the eruptive Beltane Bonfire and a Fugue on a Fragment of Chopin, the fugue subject itself being taken from Chopin’s Fourth Ballade, which separated these two pieces.

It was a pleasure to hear these young artists, and more was to come on the morning of the following day, a Young Artists’ Piano Recital performed by prize-winning students of the Trinity College of Music; three pianists concentrated upon transcriptions, or works based upon earlier music – genres to which Stevenson himself has made a number of significant contributions – and these were followed by a double two-piano recital. First, Allan Schiller and John Humphreys gave what many considered to be an outstanding performance of Busoni’s Fantasia Contrappuntistica, followed by Penelope Thwaites and John Lavender, who played Percy Grainger’s Lincolnshire Posy (some of it!) and his Porgy and Bess Fantasy.

The Artsong Collective returned (minus Bannister) to give a programme mainly of short sets of songs, or of song-cycles, by Stevenson, interspersed with various single songs by other composers. Of the three Stevenson cycles, “Hills of Home” (to poems by Robert Louis Stevenson) stood out as a totally unalloyed masterpiece, outstandingly well sung by Paul Keohone, but the first item, a set of Five Songs to poems by Hugh MacDiarmid, ran it close as a work of art. Individual songs included Stephen Foster’s “Beautiful Dreamer”, Samuel Coleridge-Taylor’s “Thou art” (a notably impressive song), a typically haunting arrangement of the folk-song “The Spring of Thyme” by Percy Grainger, and Two Songs by Francis George Scott. Overall, this recital gave a more rounded picture of Stevenson as song composer than “Songs of Innocence” the previous evening.

Another Young Artists’ Recital was next, a very mixed bag of solo piano, solo harp, wind quintet and string quartet pieces, mostly of course by Stevenson himself, and beginning with A Rosary of Variations on O’Riada’s Irish Folk Mass for piano. Stevenson’s fascinating score is based upon the main musical themes from each part of the Mass composed originally by Sean O’Riada, each being a separate ‘bead’ of music. It was exquisitely interpreted by Sebastian O’Shea-Farren, followed by harpist Catherine Derrick, who played two Scottish Folk-Song arrangements, and another piece, Two Cambrian Cantos, by Stevenson. The Celtic connections were continued by an all-female wind quintet from Chetham’s Music School, who played Stevenson’s Pan-Celtic Quintet, a six-movement piece each of which is inspired by a Celtic part of the British Isles, and ending with a Welsh fantasia on various folk-songs. Once again, one cannot but be puzzled as to why such elegantly written, and instantly-attractive, music is not far better-known than it is. 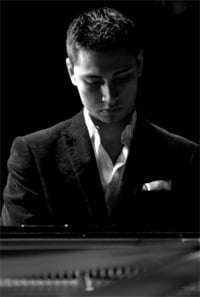 The Chopin-Godowsky Etudes are by no means easy pickings, and one admired the excellent and fearless playing of Arsha Kaviani in three of them, daringly choosing to begin with the left-hand Godowsky take on the famous Opus 10/Number 3. Here is a name to watch as is that of Christopher White, who concluded this over-long recital with two by no means insignificant pieces by Busoni – his account of the tripartite Toccata was a commanding piece of bravura and sensitive playing. In between these young male pianists came three short works by Stevenson for string quartet, the players also from Chetham’s. First was Four Meditations, a fascinating series of short, but not epigrammatic, pieces – nor were they necessarily studies for larger compositions. They were followed by Stevenson’s arrangement for string quartet of Busoni’s Third Sonatina for piano, re-titled Quartettino. By this time in the weekend, Stevenson’s compositional mastery was so self-evident that he could be forgiven anything, but there was no need to forgive such a musical and convincing version of a work which this transcriber must have known intimately in the original. The third string quartet item was Recitative and Air (DSCH), completed in 1975 and – owing to Shostakovich’s death that August – inscribed to the Russian composer’s memory (it was intended as a 70th-birthday tribute, which Shostakovich did not live to see). This work exists in a number of versions and is a highly appropriate tribute to the master, successfully avoiding comparisons with his Eighth Quartet.

Shostakovich’s DSCH ‘signature’ provided Stevenson with his most famous work, the vast Passacaglia on DSCH for piano, which dates from the early 1960s. This is, one is quite prepared to believe, Stevenson’s masterpiece, and is without question a major addition to the repertoire – a continuous work, lasting 80-plus minutes, and holding the attention throughout. The work was, therefore, in the nature of things, the highlight of the Saturday concerts, and drew the largest audience, who were held spellbound by the mastery of the work itself and by the outstanding playing of Murray McLachlan, whose commitment to the composer in general, and to this work in particular, were self-evidently total. This was quite superb pianism, allied to a structural command that knows no peers. The Passacaglia is an out-and-out masterpiece, which will be played long after much music of the last 50 years is justifiably forgotten. And, despite another concert to come – by now running seriously late – the magnificent Passacaglia was enough for this listener!