It is rare to be able to comment on a performance of a Bruckner Symphony without the need to explain the nature of the version used, and often the edition, too, and Symphony No.3 is one of the most complicated in this respect. Composed in 1873, Bruckner ‘improved’ the Symphony around 1874, in which year Wagner accepted the dedication of the work. 1876-77 found Bruckner revising the music again and it was performed in 1877. The work was published with further minor revisions in 1878. By 1889-90 the brothers Schalk persuaded Bruckner to revise again. It is surprising that this late revision, with much excised, is so frequently played and recorded, since this history is well known to musicians.

I have always felt that Friyz Oeser’s edition (published in 1950) is admirable. True, I also enjoy the First Version as represented (among others) by Georg Tintner in a Naxos recording, but I have to confess that in tha version it becomes obvious that Bruckner was struggling when composing the finale. Oeser takes 1877-8 as being the best representation, but does not include the irrelevant coda to the scherzo that was probably created around this time, and which appears in the Edition by Leopold Nowak (he also edited the 1889-90 score). It strikes me as a banal, irritating tailpiece, which is not at all worthy of the composer. Apparently Bruckner, having attached it to the scherzo, marked it “not to be printed”. Oeser deserves every credit for omitting the section. There is little point in complicating matters by describing the Schalk-influenced 1890 version. An excellent comparison between this and the 1877 version is to be found in Robert Simpson’s important volume “The Essence of Bruckner”, where he firmly insults the late version, but always in the context of elegant, scholarly analysis.

To turn at last to the music, I am delighted that this version should appear. I knew Horenstein’s performance of this symphony from a BBC tape of a 1957 performance, but while appreciating the conductor’s firm control of the music’s structure I found the recording painfully thin. The present disc provides very presentable mono sound very well transferred. I do not know the nature of the Cheltenham venue, the Town Hall presumably, but it does justice to Horenstein’s penchant for wide dynamics. The hushed opening builds excitingly to the hammer-blow of the first major climax. The woodwinds are clearly delineated throughout and the conductor’s sense of drive makes Bruckner’s grand tutti sequences seem like one triumphant episode after another. Horenstein was never a conductor to indulge in extremes of tempo – the aptness of his choices always permits him to develop true expressiveness without resort to Romantic manipulation. There is an almost Beethovenian directness in the huge opening movement. Bruckner throws in fragment after fragment, not necessarily developing these brief examples, but in this interpretation they are skilfully welded into the fabric, the sense of continuity sweeping the listener along and making it seem shorter than it is. This movement represents the strength of the interpretation and leaves the listener eagerly awaiting the remainder of what promises to be a remarkable interpretation.

The flowing sweetness of the slow movement meets expectations and the great arches of the mountain range of Bruckner’s conception are fashioned with power and imagination. The scherzo benefits enormously from Horenstein’s drive – he does not indulge in excessive speed but strictness of tempo at the entry of the second subject is refreshing and helps sustain the tension. In the same way, the lilting trio swings joyfully forward, helping to unify one of Bruckner’s most dance-like scherzos. The problematic finale does seem to show the merits of this particular edition. I am convinced that Bruckner’s ideas of 1877 put his creation in the best light. This is still not perfect structurally, but in Horenstein’s hands there is a sense of continuity that could easily be lost as the composer piles one theme bewilderingly on top of another. The uniting element is the innocent, sweet-sounding secondary subject which gives a sense of homecoming each time it returns amid the brief diversions and occasional angry outbursts. 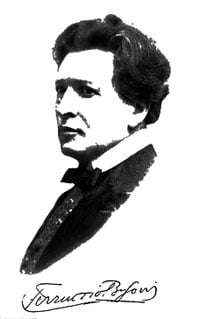 The sweep of this performance is magnificent. I have to admit that the sound becomes gritty at climaxes, but it is never cloudy and the recorded balance is exemplary. A sweeter, smoother quality would have enhanced this remarkable performance even further but, despite some roughness, the complexities of instrumental detail during those great climaxes can always be heard, even when the whole orchestra is playing fortissimo. Praise, too, for the realistic quality of the well-balanced timpani. A more resonant acoustic would have added a further element of grandeur, but that could be said of many Bruckner recordings.

Horenstein is often at his greatest in Bruckner and his reading of the Third Symphony is magnificent. The Busoni makes an interesting addition – a speciality of Horenstein (1898-1973) who knew the composer and conducted a series of concerts in 1966 to mark his centenary. The delightful Tanzwalzer – dedicated to the memory of Johann Strauss – is performed with huge panache. I like Joel Lazar’s turn of phrase in his thorough, superbly researched and presented booklet note when he refers to “… virtuosic imitation and clever distortion of Strauss’s language…” The recording (again mono) is superior to that of the Bruckner, avoiding edginess. This is a very enjoyable, extremely colourful 11-minute encore. However, I shan’t always want to play it immediately after the towering glories of the Bruckner.