These are well-constructed pieces but not perhaps to be consumed at one sitting unless perhaps played as background music in a restaurant. In the circumstances this is not as shocking a notion as lovers of this period of music might suppose because this thought is prompted by the sound which is light in tone and of excellent tonal quality yet it tends to come across with no great dynamic contrast and there are no striking climactic moments. A great attraction however is the relative unfamiliarity of this selection. Most of the overtures are single-movement in structure but in “Il ritorno di Don Calendrino”, “Il convito”, Il falegname” and “Le stravaganze del conte” the conventional three movement Italian style is used.

Often (but not quite always) the overall sounds are rather similar between one work and another. The very first bars of “Voldomiro” are a little worrying – full orchestra is used but from the outset the distant aspect of the timpani warns that the recording might be in soft-focus. There are good clear violins – the occasional solos are well captured – and there are some delightful wind timbres when separated from strings. In the three-movement yet brief (3½-minute) “Le stravaganze del conte” it sounds as though trumpets are used – no timpani seem to be present (a questionable procedure at this period: if no drum-part exists then one should be constructed for any work using trumpets). However, the opera was probably never staged and only the holograph was available so maybe the timpani part was mislaid.

For the best-known item – the Overture to “Il matrimonio segreto” (The Secret Wedding) – this recording uses the lesser-known edition prepared by Cimarosa for a performance in Vienna; it includes an oboe melody not incorporated in the better-known version. This overture is given a vital performance and certainly the extra oboe melody greatly enhances the piece; the timpani have a little more presence here too.

“L’ínfedeltà fedele” is clearly recorded with excellently played high horns ringing through. A number of the overtures could perhaps be described as pleasing sub-Mozart, and one or two actually approach that master in their vivacity but “L’ínfedeltà fedele” has melodies that vary between the uninspired and the banal. 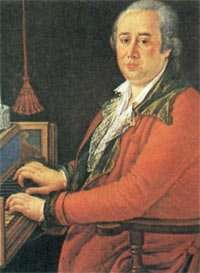 “Il ritorno di Don Calendrino” is probably as near to Mozart as anything here – a true prelude to what one might suppose to be a full-scale opera but it turns out merely to be a two-act Intermezzo. Conversely “Il falegname” was one of Cimarosa’s most successful operas although the cheerful, lightweight overture gives no particular clue as to how the Carpenter of the title is portrayed. Both here and in “Cleopatra” (which, unusually has a slow introduction) the recording is sparklingly clear – the lighter the scoring, the more successful the engineering seems to be.

The booklet provides much detail – the product of musicologically aware writers (Nick Rossi and Allan Badley). Once, however, they indulge in scholarly over-elaboration. This occurs in the description of the Overture to “Il convito”: the longest work, the commencement of which together with another moment midway through the first movement, makes one wonder if something Masonic is involved in the drama. We are briefly informed that this three-movement piece is taken from the composer’s holograph and is one of two overtures to the opera. Thereafter the alternative version (which has one movement) is described in great detail, the much fuller orchestration is listed, the separation of parts described, the featuring of solo instruments explained and finally we are told that it is identical to an overture to a completely different opera. This is scholarly over-indulgence because this detailed explanation is being provided about a piece of music that is not part of the recording! Perhaps I am being unkind but then I might be permitted a wry smile at academic excess because the description of the music that has actually been recorded is so helpful.

“La vergine del sole” is perhaps the most dramatic piece of all: the timpani are used extensively, representing volcanic eruption, earthquake and possibly Peruvian sacrifice. Sadly these instruments are as modestly balanced as ever – their solo moments are audible of course but if the strings are playing at the same time, then the drums seem to be no more than supporting background.

In all, this is an elegant-sounding release (previously available on Marco Polo 8.225181) of late-18th-century music played by a very skilled band of players – if only more punch and presence had been afforded the orchestra Cimarosa’s invention might have fired the imagination more effectively.