Recorded between 1981 and 1991 in Lukaskirche, Dresden

These Mozart performances, originally issued on Philips, by one of the finest of orchestras and a distinguished Mozartean in an immensely spacious acoustic give an opportunity for discussion of contrasting performing styles.

In the accompanying booklet this is gone into in-depth and is supported by many comments from Sir Colin Davis in reply to questions (posed by Colin Anderson, this site’s editor) on the subject. To use the popular current description, ‘period performance’ is useful shorthand for reminding us of the relatively recent resurgence of the use of instruments virtually identical to those used in the days of the composer. The conductor responds to questions about performing older music with modern instruments greater in number than might have been used in early performances. This should not be thought of as an apology for doing so. In my experience of recent performances of late-18th-century and early-19th-century music, a considerable proportion of the finest of these do in fact use today’s instruments at today’s concert pitch.

The stylish balancing of parts is all-important and I recall Sir Thomas Beecham using full symphonic string strength in Mozart yet still illuminating the inner wind parts with absolute clarity. With a symphony orchestra there are a few approximations that need to be made – a conductor should bear in mind that timpani tended to sound more ‘military’ because hard-headed sticks were used in previous times, but that quality can easily be imitated on today’s drums. Similarly the relative brightness of the modern trumpet should be borne in mind so that these instruments are not allowed to overpower the horns; but, in general, provided that the nature of 18th-century texture and balance is appreciated, modern symphony orchestras can portray a composer’s intentions with reasonable accuracy.

It is perhaps a little sad then that this work is not among the most impressive interpretations in this set. It is gentle and beautifully blended but the warm, round sound detracts from the drama. The opening Molto allegro is very moderate in pace – there is none of Mozart’s implicit anger here. This warmth is underlined by the use of Mozart’s revised score with its added clarinets, which enrich the textures still further. Those who have recorded the barer original score are also those who achieve the required fierceness, the chief among these is Furtwängler who has no fear of observing Mozart’s demand for a very fast tempo in the first movement. Jochum too, though not quite so fast, brings out the disturbed essence of the movement and even Beecham – never a champion of ‘authenticity’ goes back to the original score and achieves similar disquieting feelings, as also do Barenboim and Marriner.

If No.40 seems too ‘comfortable’ under Davis, his warm approach to Symphony 33 is immensely satisfying. But for the unexpected decision to employ short grace-notes in the first movement on some (but not all) occasions, Davis must surely convince most Mozart-lovers that this elegant, unhurried, flowing style is absolutely right for this gem of a work. The remaining lightly-scored work is Symphony 29: a work that I heard Davis conduct early in his career in a performance I recall as being more lightweight than the present version. Nevertheless his unhurried and serious approach in this Dresden recording is very convincing. Conductors sometimes forget that the opening movement is marked Allegro moderato and Davis makes the music glow as he obeys the composer’s instruction and lets it unfold naturally – he also makes sense of the tricky matter of ornaments. Once again the firmness of the Minuet is a welcome feature and its quaintly repetitive nature is subtly underlined.

The three-movement Symphonies 31 & 34 are played with the boldness and strength heard long ago in Karl Böhm’s famous old recordings. Davis does not incorporate the Minuet of questionable authenticity in No. 34 that Böhm always favoured nor does he follow that conductor’s choice of an amazingly slow tempo for the finale of 31. No.32 – in effect an Italian Overture – is played with serious firmness giving it great stature. Here I began to be reminded of Josef Krips’s underrated series of late Mozart symphonies with the Concertgebouw Orchestra – maybe the similarity is brought to mind all the more strongly because of the generous resonance surrounding both sets of recordings but from here on, Krips kept coming to mind – expansive tempos but without any fussy phrasing. 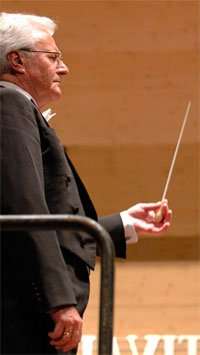 In particular the two versions of the ‘Linz’ Symphony have many parallels – including the ability to give the finale impetus despite a measured speed. Neither conductor goes beyond the standard modern score of the ‘Haffner’ Symphony despite interesting musicological points often discussed about Mozart’s transfer of the music from Serenade form to Symphony in which he added flutes and clarinets to the original. In his recording, Marriner made a very convincing case for the barer original scoring. Then there is the question of the repeat indications that were not printed in the revised score. Fricsay, Szell and Saraste all make the exposition repeat in the first movement – to the benefit of the Symphony’s proportions. Nevertheless the nobility of Davis’s interpretation is not to be denied.

Davis’s broad view of Mozart makes his version of the ‘Prague’ symphony very special. The great Adagio introduction is a major drama in itself and the expressive oboe set against the powerful full orchestra in the subsequent Allegro hugely enhances the drama and how gripping the conductor makes the start of the finale’s development by allowing the timpani to exert the utmost force in the drums’ sudden flourish at this point.

Having perhaps implied that comforting warmth did not assist the dramatic impact in No.40, that same characteristic is of great benefit to No.39. The rich long-breathed melodies perhaps encouraged Mozart to use clarinets and the blending of the woodwind ensemble by Davis enhances this warm, full-bodied performance – a grand approach with no subjective intervention. Normally I would have preferred a faster Andante con moto, but in the context of this reading the gentle speed makes sense. Just one traditional habit slightly troubles me though: this is the slight speed-up at the tutti when the first melody of the Allegro of the opening movement has been stated. The ‘Jupiter’ Symphony is convincing throughout and here Davis’s measured tempos really do enhance the grandeur of the piece. There is marvellous stability in the first movement and the Minuet sounds ideal at the true Allegretto that Davis adopts. I have never understood the relatively recent habit of conductors who omit the ‘ett’ from Mozart’s Allegretto instruction.

Davis’s feeling for proportion in all these works is noteworthy and his observation of printed repeats entirely logical – all marked exposition repeats in outer movements are made. Additionally, the relationship of tempos between movements is beautifully judged. Davis cannot be faulted for the correct representation of the orchestral scores that he was using but these editions ignore research. For all that, this is altogether a rewarding set – those who already appreciate the work of musicians performing with modern orchestras are more likely to be reminded of Josef Krips than of Eugen Jochum (Klemperer and Böhm come midway between these styles in late Mozart). Davis approaches these symphonies with weight and gravity and this makes the larger-scale works memorable through this style of interpretation.