The music of Erkki-Sven Tüür (born 1959) has surprisingly little in common with the output of other well-known Estonian composers such as Eduard Tubin or Arvo Pärt. Instead, one hears echoes of composers as varied as Berg, Varèse and Penderecki, and the influence of minimalism and even rock music (Tüür founded an Estonian rock group called “In Spe” [In Hope] at the age of 20).

The first and most impressive work on this disc, the Fourth Symphony, was composed in 2002 at the behest of percussionist Evelyn Glennie. The work is in one movement of 31 minutes, with four subsections that approximate to the movements of a traditional symphony. The work’s title of ‘Magma’ was chosen to reflect both the elemental power and fluidity of the material.

The symphony opens with a primordial growl of timpani and low pitched brass chords, followed by an introductory section of sliding string clusters, chirping woodwind and rhapsodic sequences on the upper register of the glockenspiel. As the work progresses, a variety of percussion instruments are heard, including vibraphone (reminiscent here of Berg’s “Lulu”), bongos, marimba, wood-blocks, congas and the traditional drum kit of rock and jazz (hi-hat, cymbals, snare drum and bass drum). This latter group of instruments is used in the agitated second section of the symphony and in the soloist’s freely improvised cadenza. The symphony includes a highly atmospheric slow movement where percussion is used to add gentle splashes of colour to luminous string chords that are suggestive of John Adams. A final section conveys a sense of struggle before the music fades mysteriously into silence. 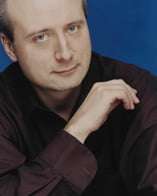 The distinctive sonorities and pounding rhythms of Tüür’s Fourth Symphony give it an immediate and visceral impact, but it also has sufficient originality and symphonic strength to bear and repay repeated listening. It certainly has the potential to become a repertoire piece. Tüür’s occasional use of atonality is unlikely to be a challenge to anyone exposed to contemporary film music; the idiom is no more advanced than, for example, John Williams’s score for “Close Encounters of the Third Kind” from the late 1970s.

“Inquiétude du fini”, for chamber choir and orchestra, was composed in 1992 and is the earliest work on the disc. It is set to a text in French by the Estonian poet and writer Tõnu Õnnepalu. The mix of minimalist choral chants, occasional bursts of pounding rhythms and interludes of atonality sit together rather uneasily. Much more impressive is “Igavik” (Eternity) for male choir and orchestra, written in 2006 for the funeral service of Lennart Meri, a former president of Estonia and a friend of Tüür’s. Featuring both vibraphone and sliding string textures, clearly favourite sonorities for Tüür, it is a dramatic and affecting piece. (Texts for the choral works are included in the booklet.)

The final work, The Path and the Traces was written in 2005 and dedicated to Pärt on the occasion of his 70th-birthday. Composed for string orchestra and featuring simultaneous streams of fast- and slow-moving music, it is both immediately accessible and a work of profundity.

All four pieces are given carefully prepared and committed performances by the Estonian National Symphony Orchestra under Paavo Järvi, and the involvement of the dedicatee, Evelyn Glennie, in ‘Magma’ gives this performance an additional measure of authority. The engineers provide a recording of enormous weight and clarity, the results of which are particularly remarkable in the Symphony. This excellent Virgin Classics release should do much to advance the cause of Erkki-Sven Tüür’s distinctive and fascinating music.