The Mozart items here are thoughtfully conceived without any sense of routine, as one would hope from an artist in the early stages of exploring each role. From the start of Leporello’s ‘Catalogue aria’ one can picture the character’s facial expression, body language and treatment of Donna Elvira. His first reading of the accounts from different countries has a frivolous tone to go with the chuckling woodwinds. Then, in the deceptively elegant dance section, he expands his tone at the mention of Giovanni’s tall victims, before coming close to a giggle at the succeeding reference to small women. At “sua passion predominante è la giovin principante” his voice drops away almost to nothing as he whispers intimately to Donna Elvira, a purely microphone tactic which could not work in a staged performance.

Switching to the title role and to the Act Two ‘Serenade’, the tone perversely comes and goes. Even if this is supposed to convey that the disguised Giovanni is afraid of being overheard, it comes across as a mannered effect; had I been Elvira’s maid I would have asked for the message to be repeated! The so-called ‘Champagne’ aria is, by contrast, openly proclaimed and benefits from not being treated as an Olympic sprint, while maintaining its brio. The all-important junction points are smoothly managed.

Figaro’s ‘Se vuol ballare’ is approached with individuality. Instead of the open snarl with which most players of the part colour the line, Schrott prefers inward brooding in the recitative. The opening section of the aria is tentative, as Figaro reflects on what he has discovered about his master’s intentions, though the stern crotchet rhythm and peremptory high notes convey his anger and resentment clearly enough. The repeat is subtly differentiated, taken slightly faster and more decisively, indicating that he has made his mind up to take on his opponent. The address to Cherubino, which ends this act reproduces that dark, heavy style, as if Figaro is still smouldering with indignation. Only at the pause does he lighten the mood with a comically overblown cadenza and release the humour of the situation. The last-act aria again shows a man not entirely sure of himself, wretched and regretful but without ferocity. Indeed he once again lapses into near-inaudibility as he intones Susanna’s name, with the second mention lingered over longingly. This stands out conspicuously in an aria that is otherwise in constant movement. 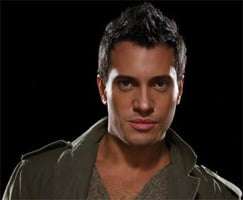 Schrott’s voice is top-heavy for the genuine bass arias, which form half of the recital. Banquo’s aria needs a voice which can match the sound of the trombone harmonies and the doubling of the melody in the strings’ dark low register at the opening: Schrott’s is too light, even if he scores in the ease of his Ds, D sharps and Es in the major section.

In the final three selections, all sung in French, Schrott attempts to establish his bass credentials. That war-horse of an earlier generation of operatic basses, the ‘Sérénade’ of Méphistophélès from “Faust”, is given a flamboyant performance, with a beefy seductiveness complemented by gross and ribald laughter. In ‘Et toi, Palerme’ his assumption of the role of Procida thunders political defiance and impresses musically with portamento and smooth movement through written and improvised cadenza phrases; there is some lack of contrast with the more tender utterances of the aria, however. Finally Schrott reinforces his aspirations with the ‘Invocation of the Nuns’ from Meyerbeer’s supernatural opera “Robert le Diable”, the piece in which his timbre most resembles what we expect from a basse noble. He gives full value to what is a fundamentally empty piece of declamation, rising to a climactic high G. While elsewhere Italian words come over clearly, Schrott’s pronunciation of French lacks the idiomatic clarity of the native performer. In particular the concluding letter ‘e’ repeatedly comes out as if accented.

I have compiled this review in what seemed a logical order, separating Schrott’s impersonation of characters in Mozart’s operas from the nineteenth-century pieces. Curiously, however, Schrott (or his producer) eschews this obvious continuity (as listed). Not only are Acts One and two of “Don Giovanni” and Acts One and Four of “Figaro” reversed, but Mozart is interrupted by music in a markedly different style, making irritating demands on the listener. I suspect the intended message is that this is a singer who transcends vocal classifications and is versatile as an interpreter. The latter point I find proven on most of the evidence here presented; of the former I remain unconvinced.

King Philip’s ‘Monologue’ is the most rewarding performance. The aria, extraordinarily rich as it is musically and psychologically, has clearly been subjected to considerable study and interpretative imagination. The section beginning “Io la rivedo ancor” is thoughtfully presented as indistinct reflections which only later come into focus. In terms of overall effect much credit is due to the orchestral playing of the Orquestra de la Comunitat Valenciana under Riccardo Frizza and the recording team under Arend Prohmann. The cello solo, played by Rafat Jezierski with a mixture of overpowering grief and frustration, is compelling. Then conductor and engineers bring together the added layers of violin semiquavers, sustaining horns and bass pizzicatos in perfect balance. In the main body of the music the singer gives a uniformly enthralling interpretation, even if exaggerated pianissimo effects are ventured a couple more times. The shortage of sonority in the lower reaches is still noticeable, however; I would not cast him as King Philip. I am reminded of the great Belgian bass-baritone Jose van Dam, who played the role in Luc Bondy’s Châtelet production which was later seen at Covent Garden and he also recorded Sarastro for Karajan. Great artist though Van Dam was, the absence of the necessary low notes in his voice for both these roles deprived the interpretations of a vital dimension.

Schrott’s release is subject to what are now the standard marketing methods of the Universal stable: an associated website and an accompanying PR drive which emphasises the glamour, youth and physical appeal of the artist, with photographs resembling those used in glossy fashion magazines or to advertise male personal-care products. The photo-shoot has produced a consistent image of a cool, relaxed young man, casually dressed, and lit so as to create an impression of smoky mystery.

The booklet note by Roger Pines has an element of hyperbole but are also helpful in drawing attention to the biographical motivation and intentions behind some of the more interesting details in these performances. Pines refers to Schrott slimming down his “grand-scale bass to meet Mozart’s demands”, while I hear a Mozart-sized baritone donning the clothes of nineteenth-century grand-opera.

Given the retrenchment of the classical record business one should perhaps be grateful to Universal, the conglomerate that comprises Decca, Deutsche Grammophon and Philips, for continuing to record recitals. Universal has at least three major tenors, and the soprano Anna Netrebko, on its books. Let us hope their contribution to these artists’ careers is wise.