In the first movement of Opus 101 Igor Levit manages an ideal mix of suggesting deep structure and extemporised melody. His close study of the music, and his long-gestated reflection on it, is impressive, and without ever stifling its life-force and spirit. The succeeding scherzo is vivid yet wide-ranging in mood and Levit’s profound response to this music is fully experienced in the short slow movement, every note made significant but not dwelled upon, and the burst of energy into the finale is exhilarating, the measures rhythmically chiselled. Following this is the mighty ‘Hammerklavier’, maybe a little too fast in the opening movement (it’s a question of how much one trusts the metronome marking) but Levit has all the technique, style and variegation to sustain such impetuosity; furthermore he ignores the ‘red light’ of the recording studio to give what comes across a ‘real’ performance. Levit exults in the turmoil of the first movement; he makes sure that it is incident-packed, but never bludgeons the music, finding light and shade, too. The scherzo sizzles by, full of happenstance. With the extended slow movement, Levit gives us a philosophical meditation, flowing and always expressive, as if in suspended animation, and the finale and all its fugues is a fine blend of formal and crazy as well teasing out connections with J. S. Bach. There is some scintillating playing here – and it all serves the music.

This chronological survey, neatly filling two compact discs, is of course completed by the last three Piano Sonatas, opuses 109, 110 and 111, often given as a recital. Three very different masterworks, Levit is more volatile and demonstrative in the first movement of 109 than others, and then the scherzo is floor-shaking in its impetuosity. 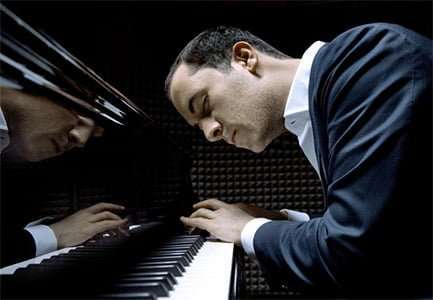 The extraordinary finale, based on the most-sublime and contemplative of Themes, finds Levit once again alive to long-term thinking as well as of-the-moment poetry, simultaneously building to the trill-encrusted climax, cathartic here, and the simplest of returns to that seminal melody. The opening bars of 110 are suitably solemnised, then radiant, the music always saying something and going somewhere, a reverie that is both inward and outgoing. Levit finds a gritty countenance to the scherzo and then looks intensely into the slow movement and to the finale that it becomes, makes the slow fugue something spiritual and also weighty and sonorous, the nine G major chords a thing of wonder, and the final fugue something of a sunrise. In 111 Levit, after a pregnant opening, is less combative than some other pianists, the tempo for the Allegro a little ‘under’, to advantage in terms of musical clarification, but no less ‘appassionata’ because of it. As for the second and final movement, a Theme and Variations, Levit sees to it that the diversity of the commentaries is fully stated not least in the syncopations that look forward several decades to boogie-woogie (although Friedrich Gulda remains a yardstick here). Thereafter comes a distillation as the pianist is obliged to search for the straightforward ending, a final and unambiguous resting place, which Levit achieves unerringly.

It would be idle to suggest that these are definitive readings of these works – Sviatoslav Richter live in the ‘Hammerklavier’ is at yet another level, for example – but they are full of character and insights and thus to be included in any library shortlist, and the immediate recording lucidly relays Levit’s palpable and deep-seated commitment to the music.