Brahms
Violin Concerto in D, Op.77
Concerto in A minor for Violin, Cello and Orchestra, Op.102

There is no Amazon link available at present for this title

There are of course countless recordings of Brahms’s Violin Concerto, set-down for posterity during many decades by some of the greatest virtuosos, and not many fewer of the Double Concerto, itself attracting a galaxy of notable performers.

This Talent release stacks up very well, certainly on its own terms, and also when measured against predecessors, especially the Double Concerto. It’s good to hear the estimable JoAnn Falletta conducting the Czech Philharmonic, in that although she has done some top work with her orchestras in Buffalo and Virginia, and latterly in Ulster and with the LSO, often in new and neglected repertoire that has proved very rewarding, it’s now interesting to hear her in core repertoire with one of the great European ensembles. It’s pleasing to report that in Prague she secures a lively and unanimous response from the famed Czech Philharmonic, the playing full of distinction and character, and proves herself to be a sensitive and dedicated partner while ensuring a very personable unfolding of Brahms’s orchestral writing.

In the Violin Concerto, given a direct and spontaneous outing, the scene is promisingly well set by the imposing introduction. Yuzuko Horigome enters with a feisty spirit and her playing throughout is vividly communicative, although she is rather closely balanced and one would like to hear a little more parity with the Czech Phil, although its detailing is clear and tuttishave warm fullness. Horigome has a clear-sighted course through the first movement and nothing is indulged, although a slightly sweeter-sounding top register would be welcome. Joseph Joachim’s cadenza (not referenced in the booklet) is impressively brought off. A longer gap between the first two movements is needed – to give pause for thought – and if the Adagio arrives too soon, it is initiated by a beguiling oboe solo, the whole endearingly expressive, the performance wrapped up by a fiery finale that keeps its poise. 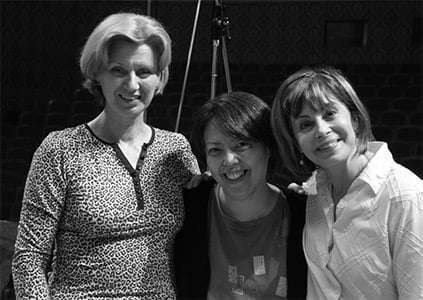 It’s the Double Concerto (written as an olive branch to Joachim, he and Brahms now estranged) that steals the show, not least through Viviane Spanoghe’s outstanding contribution in terms of timbre and musicianship (albeit on the front cover, as you can see, she and Falletta are presented in smaller lettering!), and slightly overshadowing Horigome, although one senses a real team effort throughout.

I got to know Brahms’s Opus 102 through the recording by Zino Francescatti and Pierre Fournier, with Bruno Walter conducting, a wonderful introduction to this great work, and one that has found few emulators over the years. This one from Prague comes very close and I have returned to it numerous times with admiration and pleasure. Ideally paced, with symphonism and heightened expression perfectly offset across the first movement, Falletta’s rigour and vigour also generously captures Brahms’s humanity to poignant effect; try the orchestra’s passage from 11’08 to 11’30. Unfortunately a smidgen of sound has been cut from the several-second die-away of the first movement’s final chord and, once again, the next movement follows far too soon, but here one is immediately entranced by its intense lyricism and, as throughout, by the superbly characterful Czech woodwinds, not least the inimitably fruity-sounding clarinets. The finale is marvellously vital, with rhythms having a real spring to their step.

I do wish though that the recording venue, however hallowed the Dvořák Hall may be, were less reverberant and ambient, and the orchestra not as distantly placed. Furthermore it sometimes seems like soloist(s) and orchestra are fighting for space, despite there being much of it, with the Philharmonic not so much losing out but hanging on as poor relations, and in the Double Concerto in particular Horigome and Spanoghe can seem too immediate; when textures thin, the orchestral clarity is better, but the fullest passages can seem congested.

Nevertheless, this account of the Violin Concerto is animated and agreeable, and that of the Double Concerto quite compelling, one of the very finest.