Elgar is not the only composer whose anniversary they are celebrating in Birmingham this year, 2007. South Africa-born John Joubert, who turned 80 in March, has been associated with the city since 1962, when he was appointed Senior Lecturer in Music at the University there.

The music on these CDs spans the years 1957 (Piano Sonata No.1) to 2006 (Piano Sonata No.3), and shows Joubert to be a consolidator rather than an innovator, though of course none the worse for that. It isn’t hard to detect his admiration for Britten, and his piano writing has something of the luminous quality of Tippett at his most lyrical. That said, Joubert is completely his own man, and a distinctive voice emerges from this collection of instrumental works.

Disc 1 begins with the String Quartet No.2 of 1977, which takes the ‘Muss es sein?’ motif from Beethoven’s final String Quartet (Opus 135) as its starting point. Shostakovich is also a presence, and not only in the third movement, which quotes his DSCH figure as a tribute following his death. The Brodsky Quartet enters completely into the work’s emotional world, projecting the scherzo second movement with tremendous drive and energy, exploring with complete conviction the unease of the third movement (which itself has a second, restlessly edgy, scherzo at its centre – this seems to be a favourite procedure of Joubert’s) and building the finale’s central climax perfectly. 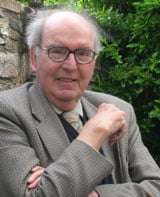 “Landscapes” is a song-cycle for soprano and piano trio dating from 1992 setting five poems on the subject of mankind’s impact on the environment. Patricia Rozario charts its varying moods with her usual focussed tone (though occasionally with less than perfect diction) and the trio, which includes the composer’s cellist daughter, Anna, is sensitive to the lines and textures of the instrumental parts. On limited acquaintance it doesn’t seem to have quite the same level of distinction as the other pieces in this collection. The best movements are the reflective ones – the opening setting of Edward Thomas’s “Adlestrop” and the concluding Walter de la Mare and Thomas Hardy settings. Elsewhere, Joubert’s vocal writing doesn’t seem quite to go with the grain of his chosen texts, and you sense a certain amount of strain as he tries to convey the protest of F. L. Lucas’s “Beleaguered Cities”. The booklet includes the full texts (but gives the dates of Stephen Spender, author of the second poem, as though he was still alive – he died in 1995).

The Piano Trio (1986) is a fine piece, with a haunted, spectral first movement, a quick second movement that builds and sustains an impressive forward momentum, and a concluding Passacaglia whose spacious architecture, particularly the long wind-down after the main climax, is laid out with great clarity.

The second CD is devoted to Joubert’s piano music. Mark Bebbington begins with the Lyric Fantasy that Joubert drew from his opera “Jane Eyre”. This is not a flashy virtuoso fantasy in the Liszt mould but a more thoughtful piece that draws mainly on the opera’s principal love scene. Mark Bebbington explores its distinctive poetic world sympathetically.

John McCabe then takes over for the three sonatas. The single-movement No.1 begins and ends in tranquillity, with a central scherzo that issues in massive pealing sonorities, for which McCabe finds a powerful weight of tone. He responds equally to the delicate, high-lying writing that opens the Second Sonata, and propels the big-boned, and often quite dark, scherzo with a fine sense of rhythmic drive. The Sonata ends, like the Piano Trio, with a passacaglia (Joubert shares Britten’s fascination with this form of continuous variations), McCabe finding a steady forward path through the different contrasts of tone, texture and dynamics. Sonata No.3 takes its cue from an anti-war poem by Thomas Hardy (printed in the booklet). Following a tumultuous, dramatic opening movement, the second begins and ends in apparent serenity, which is thrown into a different perspective by the turbulent central section. McCabe, a distinguished composer in his own right, of course, finds tenderness amid the grim march music of the finale.

The booklet note is by Christopher Morley, chief music critic of the Birmingham Evening Post, and incorporates extensive comments on each piece by Joubert himself. And it’s good to see Birmingham City Council playing a leading role in supporting the production of this well-filled pair of CDs. The city is obviously pulling out all the stops to do its local composer proud in his 80th-birthday year. His distinguished output deserves no less.