Recorded 17 January 1994 in Watford Town Hall
[Recording dates and locations not advised in Lyrita’s annotation; copyright date for the disc’s release is 2007]

This is one of Lyrita’s never-issued releases, material recorded some while back (and bearing the DDD legend), although Lyrita’s annotation – unfortunately – fails to announce recording dates and venues. William Busch’s music hasn’t had too much exposure, so this release is a welcome survey of two substantial pieces.

The Cello Concerto was completed in 1941. An imploring soliloquy from the cellist opens the work, music deeply felt and deeply sad – and very reminiscent of Gerald Finzi – a slow introduction that gives way to a vigorous exposition with a tendency to sink back as well as developing a more anguished argument without losing melodic sentiment. This concise movement (of a concentrated 23-minute piece) leads to a traditionally placed cadenza, short and integral, almost a reminiscence of the opening solo, before an abrupt coda. Finzi, again, and pastoralism, inform the central movement – one of gently lilting expression – neither ‘slow’ nor ‘intermezzo’; there’s a lot of pain under the surface despite Busch’s reserve. The finale finds greater optimism and embrace, a touch of playfulness, the cadenzas bring fortitude, and the coda is extrovert.

The Piano Concerto, completed in 1938, is neo-classical in stance, rhythmically deft (quite spiky in places and is indeed somewhat suggestive of Stravinsky, despite John Amis’s contrary assertion in his booklet note) and with many expressive turns, some flamboyant cadenzas, and a tendency to fall into reverie and recall a half-remembered (rather folksy) tune or an idyllic memory. The writing for piano is virtuosic (Busch himself was a pianist) but is not a showpiece, for there is much interaction between the soloist and the orchestra, and the musical organisation, for all the diversions, is quite rigorous. The brief slow movement (the outer ones carry the main arguments) is from the Elysian Fields as woodwinds and piano mellifluously accord and strings cue a courteous dance – the effect is refined and rarefied. As in the Cello Concerto, the finale of the Piano Concerto follows attacca, a set of Variations impressively wrought, intensely argued and – via a ruminative cadenza – decisively concluded. 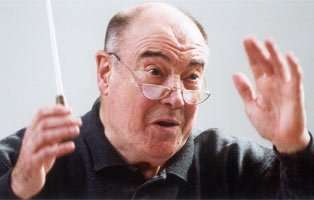 Both these works of William Busch withstand and reward repeated listening. Good, then, to have them so well recorded – both in sound and performance, Vernon Handley’s presence needing no further comment and Raphael Wallfisch and Piers Lane proving very sympathetic proponents of the respective solo parts.

William Busch (1901-1945) was a Londoner; he was born to naturalised Germans and was the father of Nicholas Busch, the recently retired Principal Horn of the London Philharmonic Orchestra. John Amis, who knew William Busch, recalls him as “a gentle person with a dark sallow face”. Busch died in tragic circumstances, when aged 43. He had just visited his new-born daughter and wife in an Ilfracombe (Devon) nursing-home. In a blizzard Busch returned home having caught a chill. His condition worsened and – due to the phone-lines being down – was unable to summon assistance. He died from a brain haemorrhage and his body was not found until several days later. He is well remembered with this Lyrita release.