Here is a unique and very welcome collection of Sonatinas for Violin and Piano, a genre often overlooked in our teeming world, with most of them (not necessarily the best) being by British composers. Perhaps the best-known is that by Lennox Berkeley, which has been recorded before – a rather serious work but not wholly convincing structurally as the short-breathed Finale does not, surprisingly for this composer, truly hang together. Nonetheless, the elegance and inherent style of the piece is well-achieved in this performance.

Jean Françaix’s Sonatine (1934) is very much of its period and is strikingly individual in its civilised and inherently pleasant character – entirely genuine expression and not a bar in could be described as meretricious. It receives a wonderful reading, admirably balanced, with Nicola Eimer coping superbly with the very tricky piano part.

Cheryl Frances-Hoad’s Sonatina (a re-working of a 2011 piece) is mostly effectively written for the instruments. Although the character of the music is not strikingly individual, the invention occasionally tends to strive for a depth of expression which it does not achieve. The most successful movement by far is the second – opening with a succession of pulse-changes which are highly intriguing. For long stretches here the interest in the piano part outshines that of the violin, before a slower central section restores the balance, though the by-the-yard lyrical writing does not wholly succeed in rising above the ordinary before the fascinating opening section reappears. The final Lento returns us to the composer’s so-so invention; the work ends slowly and quietly, without having made much of an impression in terms of feeling. 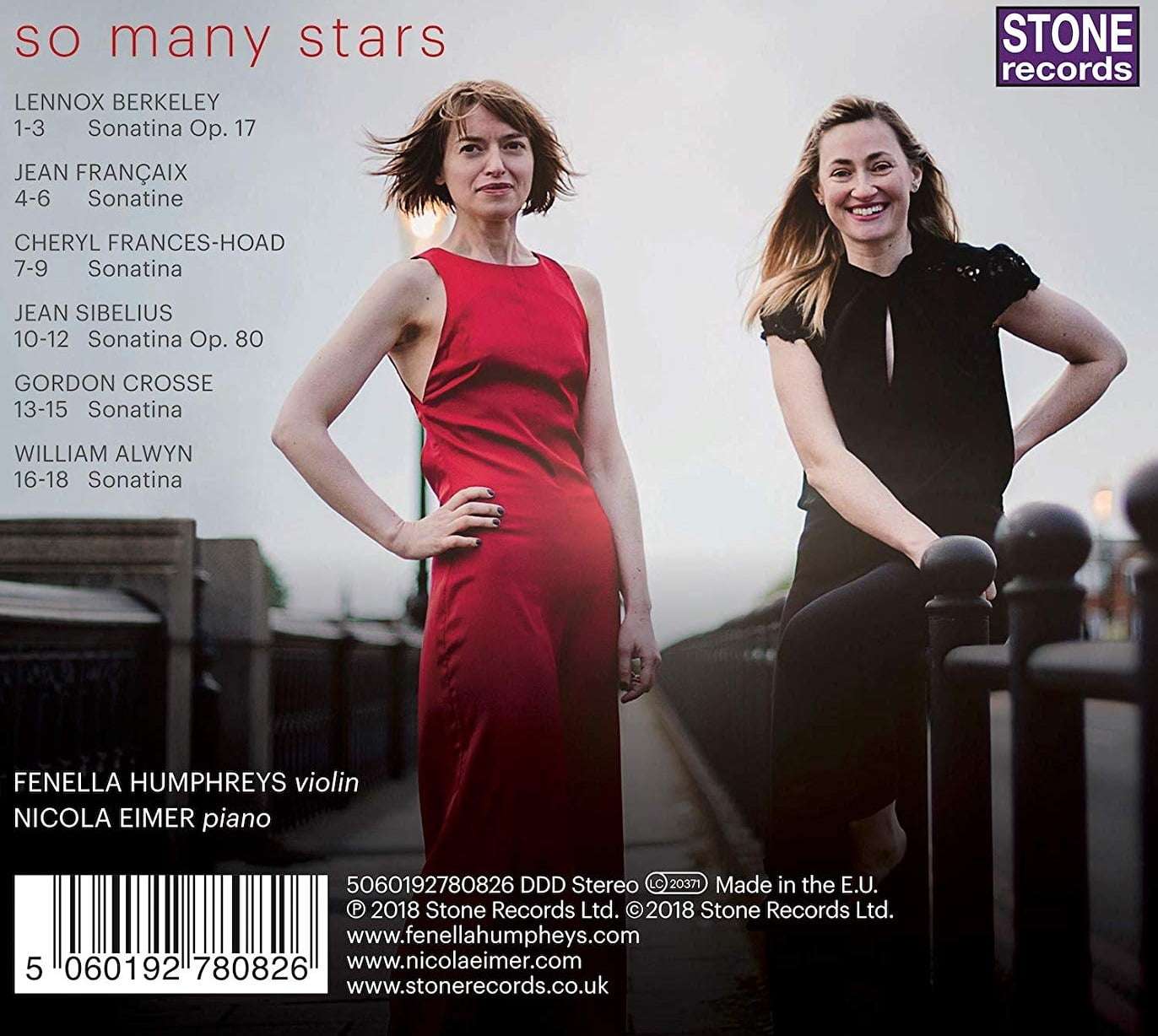 Sibelius’s Sonatina would be ideal for a guess-the-composer quiz; his piano-writing is wholly pianistic – a tragedy he did not leave a Concerto for the instrument – and, as a violinist himself, he knew how to make the immediate impression which a short-timed work needs to make. The themes are relatively brief, as is the varied working and the writing for both instruments is thoroughly idiomatic. Here is a side of Sibelius’s art which is rarely encountered, but there are many felicitous touches (the quiet octave writing for the piano is one) which – as always with this great composer – draw the listener back.

Gordon Crosse’s Sonatina (2010), written for Fenella Humphreys (indeed, inspired by her playing), follows the Sibelius well: here is music that strikes home at once, one idea following another and growing from its predecessor; this may mean changes of mood and of tempo, but as a relatively short work of art it succeeds – indeed, it does so well that one might hope the composer would turn his ideas into a bigger composition (if he has not done so already). The second and third movements (the latter taken from an earlier piece for recorder and piano) retain strong individual characteristics but sit well alongside the inherent fire of the first.

William Alwyn’s Sonatina is a relatively (but only relatively) early work, dating from the early-1930s, and tends to reveal the era of British music which brought it into being. The first movement immediately suggests the description ‘flowing’, but the initial ideas are sufficiently varied and intriguing as to engage the listener’s attention at once. Indeed, it appears from Eimer’s excellent booklet note that this work was not published until seventy-five years after it was written (and, therefore, after the composer’s death), which is a great pity for those violinists and music-lovers who, in the long intervening period, were denied the pleasures of such a finely-written little masterwork.

The recording quality is very fine, as is the playing of both of these gifted artists. This is an exceptionally well-planned issue, one which ought to find a place in the collection of any lover of music for violin and piano, and especially of British music, although I wish the catalogue number did not appear to be greater than the population of China. The release date is February the First.