Purcell
Sonata in G-minor [movements 1-3]
Orpheus Britannicus – So when the glittering Queen of Night
Chacony in G-minor, Z730
Pavan in G-minor
The Tempest – No stars again shall hurt you from above
Close thine eyes and sleep secure
Dido and Aeneas – Opera in three Acts to a libretto by Nahum Tate [sung in English, with English surtitles] 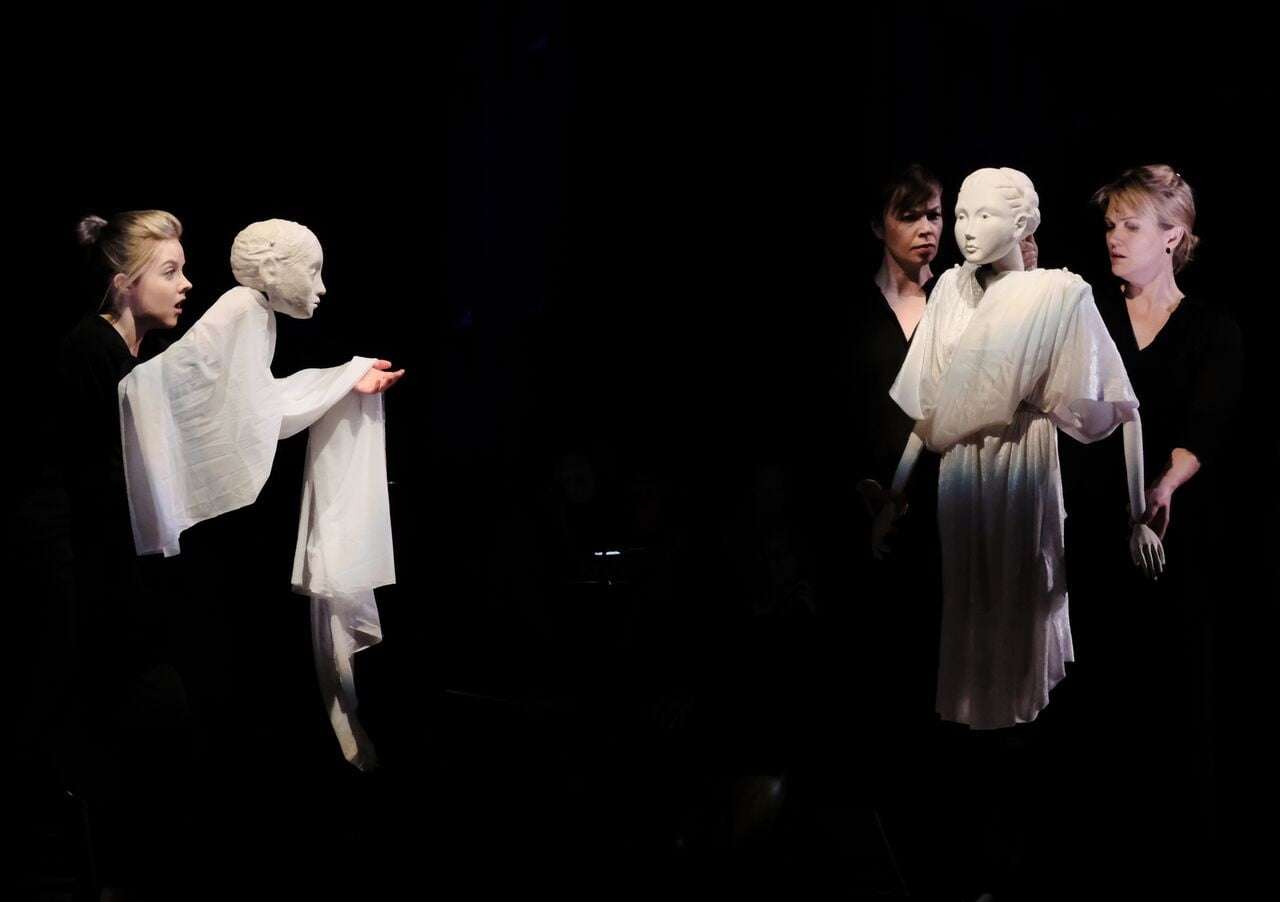 Following last year’s inane directional intervention by Daisy Evans into King Arthur, turning it into a drama about Brexit (although even then it would have been difficult to believe that that political process could become the theatrical charade it has become in reality) one might have feared what Thomas Guthrie would make of Dido and Aeneas in this presentation by the Academy of Ancient Music as the last part of its cycle of some of Purcell’s stage-works. There were no grounds for worry, however, in Guthrie’s sensitive and intelligent engagement with the composer’s only fully-fledged opera as a ritual enactment of the funeral rites for the tragic Queen, dubbed “A funeral for the Queen of Carthage”.

The performance began at the end by foregrounding that funeral in a dramatic context and avoiding the obvious Purcellian obsequies of the Funeral Music for Queen Mary for that, but instead collated some instrumental and vocal music – an idea which Guthrie credits to Richard Egarr. At the front of the stage was a catafalque with an effigy of Dido under a white veil, around which some of the characters to follow in the second part gestured in abstract or generic ways. In the first three movements of the G-minor Sonata (from the set of a dozen Trio-Sonatas published by Purcell in 1683) the AAM was in serious but not overly lugubrious mood. That was succeeded by a tumultuous account of the earlier, same-key Chacony (Z730) and then a more fleet-footed performance of another example (Z807) with mournful slides between the chromatic notes of the sinewy melodies. The silvery tone of the also G-minor Pavan was echoed in the bright, incisive singing of Rowan Pierce for the songs in between, allied with Ashley Riches’s earthier contributions. 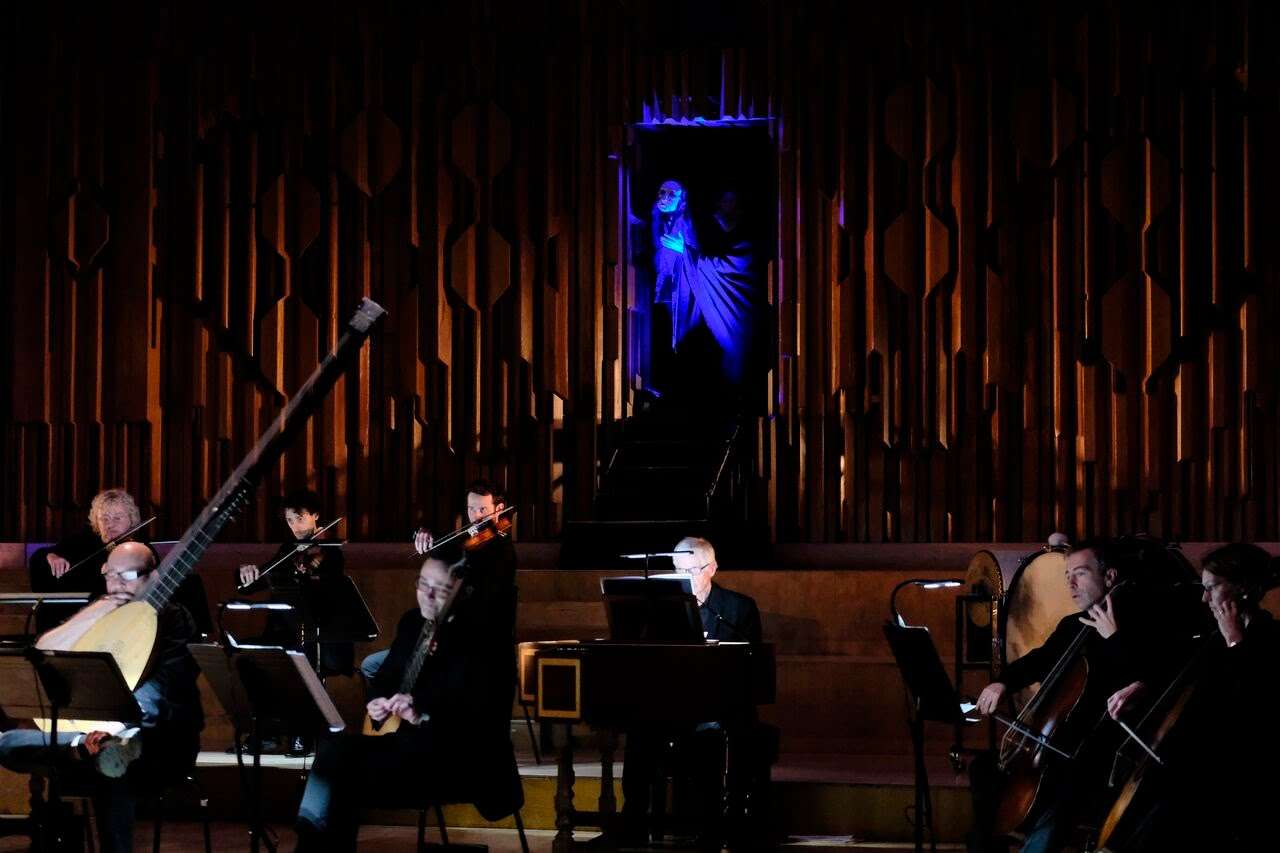 In the subsequent semi-staging of the drama proper, the effigy of Dido came into its own as a puppet, partnered by one for Aeneas, and each manipulated by Caitlin Hulcup and Riches respectively in conjunction with professional puppeteers Laura Caldow and Ben Thompson. Where these puppets were expressive Roman-style busts in form, with essentially full-length togas, the other characters and chorus-members brandished masks alone (with shorter reams of veil) which, in view of the tragedy to come, looked like death masks. Initially the enactment of the drama through these puppets seemed fussy and intrusive, but the performance took on a logic of its own, underlining the innate theatricality of this, one of the first great operas in English, as of all opera in general with its synthesis of choreography, music, and text. The pure white plaster-like appearance of the puppets was neatly offset by the funereal black dress of the singers and instrumentalists, providing a consistently Classical balance to the presentation of the whole, reflected also in the graceful gestures of the puppets which seemed uncannily imbued with human character as a result. But the urgent, almost nervous, expressiveness of their actions also brought an appropriately Baroque emotionalism to the choreography in accordance with Purcell’s artistic style.

That juxtaposition of temperaments was ideally matched by Egarr’s interpretation, with the lightly-sprung poise of the AAM’s support, and the Choir in its guise as Dido’s courtiers; raw characterisation by the latter as the witches with “hohoho” acclamations that were more sinisterly guttural than strictly musical; and a demotic articulation for the sailors’ number (which group, alone, was devoid of puppets). Hulcup (standing in for Christine Rice) was an efficient but authoritative Dido, not lingering over the famous lament as the Queen dies, but expressing pathos nonetheless. Riches and Pierce, coming to the fore now as Aeneas and Belinda, projected a similar dramatic cogency as in the first part of the programme, whilst Neal Davies brought a rough-hewn vigour to the part of the Sorceress, restoring the part to a male singer as Purcell seems to have done originally (notwithstanding its earliest documented performance in a girls’ school).

As opera, then, Guthrie’s production took a, perhaps, unusual approach in focussing more on mime than an explicit narrative enactment, but the artificiality of this method paradoxically and successfully evoked the broader and human ethos of Purcell’s drama.