Michel van der Aa
After Life – Opera in one act to a libretto by the composer, after Hirokazu Kore-eda [Revised version; UK premiere] 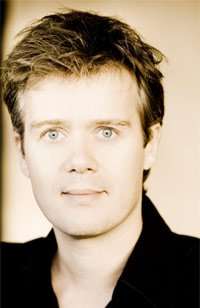 The Dutch composer/polymath Michel van der Aa (born 1970) based his opera “After Life” on the film of the same name by the Japanese director Hirokazu Kore-eda, which has become something of a cult since its release in 2001. Three people have died and are suspended in a half-way house between earthly life and heaven (hell is not an option here). They each have three days in which to choose one life-encapsulating memory to take with them into eternity.

This performance was described as semi-staged, so the full stagings mounted in Amsterdam (2006) and Lyon (earlier this year) must have been very elaborate affairs. The Barbican Hall stage was covered with the detritus of life: furniture, toys, pictures, objects of all sorts, like a Tracey Emin installation – a powerful and unsettling metaphor for the memories we all carry with us, and an equally powerful and melancholy reminder of the pointlessness of most of the stuff we accumulate; it must have once played some part in our lives, but which, no longer cherished, is forgotten. The Asko/Schoenberg musicians played in the middle of this junk, with two big film-screens at the back of the stage.

This was multimedia with a vengeance, and it’s often the case in this sort of multi-tasking work that the music becomes an accompanying soundtrack. This was not the case here, with the purposeful, almost faux-baroque live music – dealing with the here-and-now of the three individuals (Mr Walter, Ilana and Bryna) searching out their one defining memory and counselled by three ‘processors’ (Aiden, Sarah and the Chief, presented rather like celestial social-workers) – constantly leaking into a weird and rather wonderful electronic score that tweaks the veil of another dimension.

As if this wasn’t enough, the composer then added another component, the commentaries of four real volunteers (from auditions of about 50) who were filmed as they expressed their defining memories. Because their spoken contributions were instantly understandable, they rather undermined the impact of the singers, not much helped by a very angular vocal line. All four people, a boy recalling a much-loved dog, a man in thrall to the memory of his grandfather, two women returning home after long absences – conjured up eloquent and at times very moving memories, and the clever editing and the way the films folded into the staged action enhanced the disembodied feeling of the piece as a whole. It also makes “After Life” incredibly layered, with the memories and lives of the four ‘real’ volunteers and the six singers becoming inseparable from each other. For the most part, in a work 100 minutes long, van der Aa finds the right expression for the kaleidoscope of hope, love, doubt and regret, and the climactic moment when the characters recreate their memories on film, using the stage junk as props, was really tender and tear-jerking, and the music rose to the occasion. With memories of films such as “A Matter of Life and Death” and “Ghost”, the piece encouraged a broad range of free association, much of it admittedly pretty melancholic, that in its floating-world way still haunts and lingers, and which is the measure of its success.

All six singers performed in the first version at the 2006 Holland Festival. Roderick Williams as the conflicted Aiden, Claron McFadden as the Chief and Richard Suart as sad Mr Walter (who eventually identifies his one life-affirming memory) were particularly impressive. This was the UK premiere of the revised version, conducted with an intuitive grasp of the various layers by Otto Tausk.