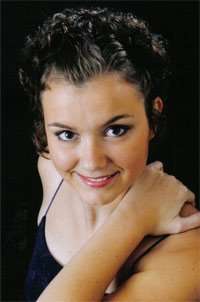 Make no mistake, this was wholly remarkable. In a week of adventurous recitals at Wigmore Hall by young pianists (the others being Natalia Strelchenko and Evelina Puzaite), this was undoubtedly the plum, not that one would have guessed by the number of empty seats. Perhaps the bitter cold combined with the substitution of Messiaen and Dutilleux (for the advertised Bach and Frank Martin) had a deterrent effect. If so, this was a pity for – from first note to last – Amandine Savary, from France, produced a recital of such patrician elegance and finesse that it would have been a cause for celebration under any circumstances.

Opening with three selection from Messiaen’s Vingt regards – music to which this listener feels little affinity – one was immediately struck by the pianist’s care for the quality of sound, the restrained dynamics and the precise weighting of chords in the hieratic opening ‘Regard du Père’. In the fractured irregular patterns of ‘Regard de l’étoile’ Savary had the ability simultaneously to balance the separate voices, whilst the concluding ‘L’échange’ – a continuous crescendo which represents the exchange between the human and the divine as Man ascends towards God – reached a thunderous conclusion, its progressive expansion achieved by weight of sound, not by mere forcefulness.

Henri Dutilleux’s Sonata – the composer is still with us at the age of 93 – was an unexpected and wholly accessible delight. As with the Messiaen, which was written for Yvonne Loriod, Dutilleux’s Sonata was written for his pianist-wife, Geneviève Joy, who gave its first performance in 1948. A large-scale work which Dutilleux considers to be his real Opus 1, the Sonata has a most unusual structure, starting out as though in classical form, leading to an A-B-A slow movement entitled ‘Lied’ and culminating in a substantial ‘Chorale and Variations’, likened by the composer to a “sonata within a sonata”. Dutilleux described the work as “virtuosic and sensuous”. In Savary’s hands the first movement’s links with the world of Fauré and Ravel (a Bluesy second subject and throwaway ending) were self-evident, the ‘Lied’ had a hypnotic tranquil beauty and the finale’s scampering 6/16 scherzo was succeeded by a final variation not a thousand miles from Prokofiev in toccata mode.

Amazingly for such subtly introspective music, Brahms’s set of Ballades was written in 1854 when the composer was just 21, at which point his champion Schumann was already in a mental home and Brahms himself deeply in love with Schumann’s wife Clara (the final Ballade has a confiding central section marked ‘con intimissimo sentimento’ suggesting perhaps that his thoughts had turned in that direction).

Although Brahms was an excellent pianist this is music where it is easy to overplay one’s hand – the climaxes of the opening ‘Edward’, a gory Scots tale of patricide – can all too readily fall uncomfortably on the ear. Savary, by contrast, found an almost Solomon-like nobility of utterance with never an ugly sound. There was too a delicious schattenhaft fantasy to the third Ballade (marked ‘Intermezzo’), whilst the extended final one – surely an unconscious echo of the deep velvet of a star-less night from Schumann’s Fantasy (Opus 17) – drew the most intimate communion from Savary in its veiled introspection.

Debussy’s Estampes – literally ‘Prints’ or ‘Engravings’ – dates from 1903 and opens with ‘Pagodes’ (following the Paris Exhibition of 1889, where the composer had heard Javanese and Cambodian musicians, there was a widespread fascination with all things Oriental). Especially notable here were Savary’s control of line, even at the most restrained dynamic levels, and her ability to voice the music as though it were happening simultaneously on several dimensions. Perhaps ‘La Soirée dans Grenade’, Debussy’s evocation of Andalusia, was slightly lacking in Habañera slinkiness and could have done with a little more overt Latin passion, but the moto perpetuum of ‘Jardins sous la pluie’ elicited the most stylish response, Savary reminding us – even in its flurry of notes – that this particular toccata repays being treated as though the piano were an instrument without hammers.

This outstandingly musical and satisfying recital was rounded off with a Satie Gymnopédie, its frequent repetition languorously varied like a water lily lazily unfurling itself in the sunlight.