Everything Doesn’t Happen at Once 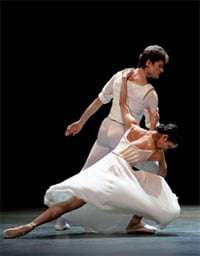 Three cheers for the return of ABT to these shores. Precious few classical ballet companies of international standing can afford to tour to the UK (or, indeed anywhere), with the exception of the Hochauser-produced Bolshoi and Mariinsky companies, so ABT’s short season is a rare opportunity indeed. Surprising that they should appear at Sadler’s Wells, whose clear artistic stance shows little enthusiasm for classical ballet – well done them then, for swallowing their contemporary principles for once and hosting this enjoyable company.

ABT wisely chose to bring two bills of mixed ballets – London is awash with Cinderellas and Swan Lakes, and starved of the most stimulating aspect of the art form: the well-constructed mixed bill of shorter works. ABT is an interesting company too in American terms – the only one in reality to retain a ‘European’ approach to classical ballet in a land dominated by George Balanchine’s legacy. ABT worked with Balanchine (indeed, Theme and Variations, which opened the second bill, was created for the company) and they perform some of his works; but they have resisted allowing their repertoire to become dominated by him, preferring to keep him somewhat at arm’s length in artistic terms.

Their history (the company is now over 70 years old) includes other influences from around the world, their approach to the art form clearly traceable through the post-Diaghilev Ballets Russes companies back to the master himself. As a company, it has always seemed precariously balanced on the edge of solvency, and has ever been characterised by buying in ‘star’ dancers, from Markova, Alonso and Youskevitch to Ferri and Bocca and now Osipova, Vishneva and Cojocaru. In London, however, we saw the ‘permanent’ company, which gave a clear view of the health of the ensemble and its underlying style.

This first programme was resolutely modern, the second ‘heritage’. Seven Sonatas is a relatively new work from 2009 by ABT’s Artist-in-residence Alexei Ratmansky, sometime Director of the Bolshoi Ballet. Ratmansky is a fluent choreographer who employs muted lyricism to an engaging selection of Scarlatti sonatas, played rather soupily from the stage. Three white-clad couples make their way through the suite, which is best characterised as a vaguely Slavonic take on Jerome Robbins’ Dances at a Gathering and even Antony Tudor’s The Leaves are Fading. In this non-press night performance, the company fielded younger, more junior dancers and showed that there is a certain lack of consistency in the artists, both in terms of technical execution (the three men were particularly varied) and artistic interpretation. Jared Matthews bounced his way through his airborne choreography, but betrayed a certain messiness in landings and did not possess the neatest of feet. The central pas de deux revealed an ethereal Yuriko Kajiya partnered most ably by a somewhat solid-looking Carlos Lopez. A good if not great work.

After the interval two ‘unusual’ pas de deux took to the stage, the first Twyla Tharp’s kookily cross-culture Junk Duet (a gift to reviewers) which passed the time, and would have done rather more if it had not been for the irritating percussion of the music, bangings and thumpings on what I can only assume to be trash cans. If you buy in to Tharp’s cross-over work, you have a ball – ballet steps mixed in with shadow-boxing, American Graffiti struts and showgirl wiggles; if you don’t, or feel that you have seen it all before (and you have), you don’t. I didn’t much care either way, but was struck by Maria Riccetto’s determination not to project character, enjoyment or communication with either audience or partner, here the darkly chunky Marcelo Gomes, who has character and stage-craft in sackloads; perhaps he could lend her some. 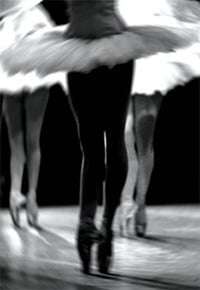 After a pause came Balanchine’s sublime Duo Concertant, which felt cramped on the Sadler’s Wells stage, probably because piano and violinist had been brought right to the front, giving the dancers half the stage space to use. When done well, the dances seem to grow out of the music, movement literally sprouting from the notes of piano and violin – in the first section, the dancers simply listen to the music, and so do we, only then do they begin to move. It was here that I sensed that all was not as it should be: Misty Copeland and Alexandre Hammoudi (she a soloist, he corps de ballet) seemed too self-conscious in stasis, too ‘balletic’ in pose, where a pure simplicity needs to suffuse them, a simplicity which is then carried over to the choreography. In movement Copeland and Hammoudi again seemed too ‘balletic’, robbing the choreography of the leanness it requires; each step should be clear, unadorned and in direct relationship to the music that inspires it – too often both dancers were a blur of arms and legs, the pure arcs of movement crowded out. Copeland is a compact dancer with solid technique, but needs to find an inner purity with which to suffuse her artistry. Hammoudi is a promising young dancer, long of limb, with a pleasing silhouette, perhaps a little too tall to get round the speedier sections of his choreography. 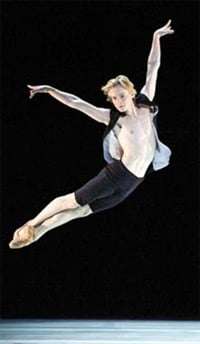 Benjamin Millepied’s stars are all in alignment, it seems. A successful Principal with New York City Ballet, his choreography is now finding favour, and having supplied the steps for the now notorious Black Swan film, is engaged to marry Natalie Portman. I am not sure he should rely solely on his choreographic abilities, which on the evidence of his 2009 Everything Doesn’t Happen at Once, are limited. It is a large-scale work, using 24 dancers and set to live performance of David Lang’s tedious, derivative score under Ormsby Wilkins’ leadership (note to composer: those crashing chords were done rather better by Stravinsky in Les Noces, just as Nijinska marshalled even larger forces with greater aplomb in her choreographic treatment of it).

Millepied has assembled a work in which you get the feeling that you have seen much of it before: take the curtain up and watch the stage being prepared and the dancers warming up – check; line the men and women up on opposite sides of the stage – check; have them march around in blocks, arms raised in portentous gesture – check. It is one of those pieces in which dancers enter an illuminated square of stage in order to leap, lift and jig, all to precious little effect. I liked the central pas de deux with newly promoted Principal Cory Stevens (tall and striking and a fine partner) and the impossibly glamorous, long-limbed Leann Underwood, which provided much-needed rest from all the flurries of movement which otherwise characterise this work. The costumes for the men are singularly unattractive – what seem like cycling shorts and open-fronted waistcoats revealing bare torsos, the women fare a little better. Lighting is effective.