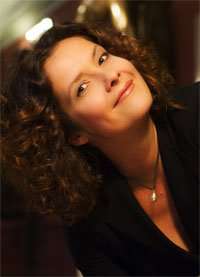 Good mezzo-sopranos are abundant in the current generation for most areas of the repertoire, the only obvious exception being the heavy Verdi operatic roles. Agility in Rossini, nobility in classical opera, intelligence in art-song: all are well catered-for. Impresarios have little difficulty in casting Sesto, Oktavian, even Brangäne, while concert promoters have a wide choice of lower-voiced female singers, who are likely furthermore to be competent in several languages.

There is, however, one reservation, which may seem carping considering the riches on offer: are these singers too similar? Does the efficient production-line of training turn out a standard product, high-quality though it may be but lacking in individuality. Angelika Kirchschlager does not make an instantly recognisable sound, though her penchant for singing contemporary music-theatre sets her apart from most of her generation. She is, however, delightful to behold and both musically and socially engaging.

Her physical communication was achieved by a quite individualistic use of the body. Firm-footed on the platform, she eschewed the use of the hands to signal emotions, preferring instead relatively restrained movements of the upper body and changes of facial expression. She clearly was as concerned to avoid the clichés of the recital room as she is those of the operatic stage.

The programme of this recital raised the question: would a large chunk of Schubert sit comfortably with the over-ripe romanticism of a master of the Hollywood film score and music by the author of that abrasive and eclectic music born out of 1920s’ Berlin? In fact more unites the three composers than divides them. As the Brendan G. Carroll persuasively argued in his programme note, all three composers set texts by great Austro-Germanic writers, while also using the poetry of friends and contemporaries, and all three were supreme melodists, to which I would add their common ingenuity in setting words. Kirchschlager and Julius Drake confirmed this unity.

The selection of Schubert songs seemed initially conservative. A charming “Fischerweise” opened the concert, Kirchschlager adopting the instructional tone of a schoolmistress to deliver the warning of the final stanzas. Her Wanderer in “Der Wanderer an den Mond” addressed the moon and its contentment with abject envy. “Frühlingsglaube” flowed gently, with carefully controlled dynamics. “Im Frühling” was informed by a hint of ironic resignation: the verse in which the poet tells of his preference for plucking fruit only from the branches his beloved has already visited was delivered with a hint of mischevousness. The leap of a minor seventh which occurs at the climax of each of the song’s three sections was delivered in a poised mezza voce, with the last example the loveliest as sound. In “Geheimes”, Goethe’s intimate revelation of the reasons behind a girl’s non-verbal behaviour, Kirchschlager found just the right degree of archness for the opening lines, broke into a telling smile for the poet’s address to his audience and then sank to a confidential pianissimo for the playful conclusion.

Julius Drake was his normal inspired self. The imitative figures in “Fischerweise” were delivered with a wide variety of weight. The unceasing rhythm of the left hand in “Die Sterne” was balanced by the emergence of perfectly judged interjections in the right between the singer’s phrases. There was a delicious moment when just a slight tautening of his tempo registered impatience with the poet’s tribute to the stars and a desire for him to be on his way. His playing was even more independent in “Lied der Anne Lyle”: a concealed commentary beneath the vocal line, an extended half-time interlude and a postlude which traced a tentative course towards its emotional destination before landing safely.

The partners were completely united in conception and satisfying in execution, with the only exception of “Rastlose Liebe” where the symphonic turbulence of Drake’s playing overwhelmed Kirchschlager and led to the only instance of unintentionally disagreeable tone as she struggled to keep up.

Kirchschlager is not one of those Lieder singers who emphasise individual words; rather, it is complete phrases which take on a particular expressive colour. Very noticeable was her use of dynamics. Hardly a sentence of the poetic texts awas uttered at a uniform volume level. In Matthäus Collin’s “Wehmut” (a paltry poem) she enlivened the platitudinous words about the transience of everything temporal by deploying marked crescendi and diminuendi; the repeated final phrase was delivered first with swelling then with ebbing tone. “Klärchens Lied” brought equivalent alternations of fortissimo and pianissimo.

The great triumph of the Schubert group was “Abschied” (Mayrhofer, not Rellstab). This song of reflection on the pain of parting, in ternary form, is set to a hymn-like melody. The drawn-out nature of the farewell is reflected in the central section as the loved ones’ voices can still be heard in the distance; at this point Schubert demands a sustained high pp, which was here supplied by Kirchschlager in a supreme vocal moment. Drake joined her in enacting the gradual fading of the voices and then led his postlude from celestial heights down to its point of rest, to complete a magical interpretation.

Korngold’s Opus 38 songs are disparate and do not make much of a coherent package. They also comprise much recycled material. The artists made a committed case for them. Kirchschlager adopted an intimate tone for ‘Glückwunsch’, graduating to a blazing fortissimo at the climax. How many wholly, gloriously positive poems have been set by German Lieder composers, one wonders? The music is certainly not as straightforward, however, and it shares a characteristically shifting tonality with the fear of death in Eichendorff’s “Der Kranke”. The pianist offered tinkling chords in the Old Spanish Song (part of Korngold’s score for the Errol Flynn epic “The Sea Hawk”) and both pounded and skittered in the ‘Old English Song’ (intended for use in that actor’s other period film “The Private Lives of Elizabeth and Essex” but cut therefrom). I found the final song, a setting of Shakespeare’s sonnet “My mistress’ eyes” the only really rewarding experience. The poet reverses the normal way of writing about the beloved, comparing her unfavourably to various natural phenomena before declaring the strength of his love to be far greater than synthetic comparisons. The setting of the octave is rhapsodic and desultory; with the sestet the mood changes and the final statement, starting almost as an afterthought turns into a rich declaration of devotion.

After doing dutiful homage to Korngold, in the Kurt Weill selection I felt I detected both artists enjoying themselves rather more. ‘Stay well’ is from Weill’s last stage work “Lost in the stars”, based on the iconic novel of South Africa’s racial conflict “Cry, the beloved country”. The betrothed of the accused black man sings of her determination to marry him regardless of the outcome of his murder trial. The song, a piece of music theatre avant la letter, in which the introduction melts memorably into the main tune, was movingly sung.

Two songs written by Weill for the chanteuse Lys Gauty in 1934 after his flight to Paris were given in authentic style, the voice sometimes descending into a guttural chest register or into speech itself. The heritage of the Lied was always evident, however, in “Complainte de la Seine”, despite its grotesque lyrics, and Kirchschlager applying the full range of her expressive powers to the tense narrative of “Je ne t’aime pas”. Inevitably in these songs Drake played a supporting role. The concluding “Der Abschiedsbrief” got the intimate cabaret-artist treatment, ending with Kirchschlager storming from the stage!

There were two encores, Weill’s “One life to live” and a folksong from the mezzo’s native Vienna. Perhaps significantly, both the current Director of Wigmore Hall John Gilhooly and his predecessor William Lyne were present.