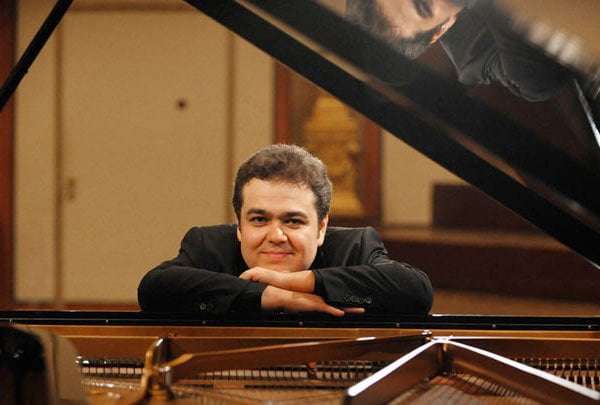 Even in the good-natured Allegretto claimed as the finale to Schubert’s otherwise unfinished Piano Sonata D279, the Russian pianist Arcadi Volodos found a stillness and mystery atomizing the artlessly spinning accompaniment that the composer himself may not have been aware of. As with the much beefier first movement (played without the exposition repeat), Volodos coaxed his respectably full audience into hearing how this precocious teenager’s music opens the door onto the astonishing completeness and spiritual reach of his later music. Here were the templates of the Impromptus and the ‘Wanderer’ Fantasy, with Volodos tactfully indulging their eager lyricism and grandeur – something he’d go on to explore to much greater effect in Schumann’s Kinderszenen. Volodos pitched the emotional scale of Schubert’s early Sonata exactly right, especially in its relaxed slow movement, in which the big gestures yielded to the song-like episodes, and he saturated the bare octaves and chunky repeated chords – which look so easy on the page – with a rare musicality.

He took the hints of withdrawal in the Schubert to their extreme in Brahms’s Opus 118 Piano Pieces, four of them entitled ‘Intermezzo’, a title that gives us not a clue to their character. Sitting on his chair in a way reminiscent of pictures of the old Brahms at the keyboard, Volodos cloaked himself in the composer’s ambiguity – the heroic rodomontade of the first Piece tailing off into the obliqueness of the second, a burst of energy in the third (a ‘Ballade’) then back to the gathering shadows and disappearing into the final number, even by Brahms’s standards one of the saddest pieces in the repertoire. I hadn’t appreciated how these late flowerings, for all their melancholic romanticism, make the expressionism of the next century inevitable, all down to the intuitive, easy swing and extemporising flow that revealed how deeply Volodos connects with Brahms’s refinement.

This was music unequivocally for grown-ups, yet Volodos was just as sure in Schumann’s Kinderszenen (Scenes from Childhood). Pianists can tie themselves in knots over these 13 pieces, with results strained and unconvincing. Volodos, though, with uncanny judgment, lay his guiding, adult hand on the Scenes’ potent mixture of celebration and recollection without patronising them. He justified the very slow tempo of the last Piece, ‘The Poet Speaks’, through the gradual darkening of the sequence – the encroachment of the adult world, perhaps? – so that the door closed firmly and quietly on that land of lost innocence, with the slower pieces, especially the famous ‘Träumerei’ (Reverie), creating an atmosphere of extraordinary intimacy.

I’d expected that Schumann’s Fantasy would break Volodos’s spell of heightened withdrawal, which indeed nearly happened in the brilliant central march that tested even Volodos’s virtuosity to the limit. The first movement, for all its balancing of extremes, inclined more to rhapsodic retreat, and the mood became fixed in the crepuscular beauties of the final, slow, movement.Apart from the optimism in some of the Schubert, this recital was notable for its degree of departure and sense of detachment, given supernatural expression by Volodos’s concentration and the miraculous sublimity of his ear-bending pianissimos. His imagination and intensity drew you into the music with compelling directness – the music simply flowed in an out of his hands.

He let us down gently with four encores – Schumann’s ‘Vogel als Prophet’ (The bird as prophet), then a piece by his beloved Mompou, followed by his own arrangement of a Spanish Dance by Manuel de Falla, in which for the first time in this recital received the full extrovert force of Volodos’s virtuosity and some pulversing fortissimos, and finally a Sicilienne by J. S. Bach.