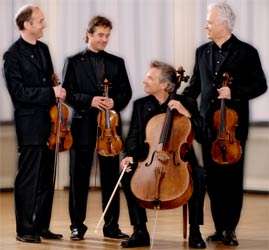 The Auryn Quartet has played without change in personnel since its inception in 1981. Thus its four members constitute a pretty rare beast in terms of longevity: similarly, the Smetana, the Amadeus, and the Schoenberg Quartets come to mind, whereas many other distinguished string-quartets have accommodated changes in personnel. Auryn, incidentally, is the name of an amulet from Michael Ende’s “The Neverending Story”, granting its wearer intuition and the realisation of wishes.

The Auryn Quartet’s playing is, without doubt, careful, experienced and distinguished – at its best it is of an order and fastidiousness rarely encountered. British concert-goers are undoubtedly privileged to have this opportunity of hearing the Beethoven cycle from this group at Wigmore Hall.

Its considerable merits were resplendently manifest in the physical and spiritual centrepiece to this first concert – the Opus 127. I sat on the edge of my seat, spellbound. For the most part, the musicians’ collective sensibilities reached as one to the heart of the music – and, through their consummate professionalism, to give lucent clarity to the music’s form and pulse. Especially telling were the transition passages, often brief and apparently off-hand – hence, often overlooked – marking the move from one mood or one thematic group to another. I recalled Furtwängler’s weightier intuitions heralding such changes in Beethoven’s symphonies. At this recital, the hesitations were slight and delicate, befitting a chamber work. The listener’s precious gain was that the emotional structure of each movement was transparent.

A further gain, of a greatly different kind, was the players’ gusto in observing Beethoven’s searching oddities – the quixotic lurches that drove commentators of the composer’s day to declare that Beethoven was unacceptable because uncouth. A case in point was the craggy awkward chordal opening to Opus 127 – large and ungainly, quivering under the weight of its momentousness. Pauses were telling, and Matthias Lingenfelder’s restrained, soaring spirituality at significant moments was exemplary. Awkward intervals were pronounced head-on, facing the blazing genius of their nonconformity. It was as if human-beings had had to wait for composers like Sibelius, Bartók and Janáček to make it safe to play Beethoven in full, rounded, confident idiosyncrasy.

The two works from the Opus 18 set had less impact, despite the skilled playing and wisps of delightful humour. The scurrying, restless wit in Opus 18/Number 3 seemed purposeless. There was effervescence but no spine. Opus 18/Number 1 fared rather better. Its authorship was in no doubt. The slow movement, however, highlighted one disappointment. It lacked Beethoven’s monstrous, restless, breathless drive and thrust – his divine energy. The Adagio affettuoso ed appassionato can tear-open the heart. I have heard the Smetana Quartet do this to me, in this Hall. Much as there was to admire, at no time did my blood sting.

But this should be a distinguished cycle.